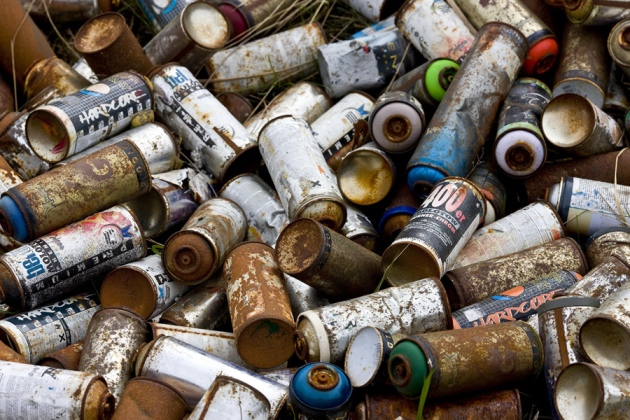 The chlorofluorocarbons that used to be common in spray cans and as refrigerator fluids were regulated to avoid damaging the ozone layer — but the gases' effects on the climate were reduced, too.

Human actions that were not intended to limit the greenhouse effect have had large effects on slowing climate change. The two world wars, the Great Depression and a 1987 international treaty on ozone-depleting chemicals put a surprising dent in the rate at which the planet warmed, says research published today in Nature Geoscience1.

Francisco Estrada, an ecological economist at the Free University in Amsterdam, and his colleagues analysed annual temperature data collected from 1850 to 2010, as well as trends in emissions of greenhouse gases such as carbon dioxide, methane and chlorofluorocarbons (CFCs) — ozone-depleting substances that also trap heat in the atmosphere — between 1880 and 2010.

Instead of relying on climate-model simulations, the researchers used a statistical approach that they say helped them to get a better look at how components of the climate system contribute to its warming or cooling by trapping heat, an effect called radiative forcing. They found that changes in warming coincided with human-initiated adjustments in greenhouse-gas emissions.

A cooling period between 1940 and 1970 had previously been chalked up to natural variability and the Sun-shielding effect of pollution emitted by European industries, as they recovered after the Second World War. But Estrada and his colleagues found that it folllowed a reduction in greenhouse-gas emissions associated with economic downturns, when industries were less active. Significant drops in emissions occurred during the First World War, the Great Depression of the 1930s and the Second World War.

“When the wars end and you have large economic growth, the emissions of CO2 rise fast and you have the onset of modern climate change,” says Estrada.

For the 1940-70 period, the way the paper shows how economic factors drove emissions down is “very nice,” says Ross Salawitch, an atmospheric scientist at the University of Maryland in College Park. “It hits the sweet spot.”

Warming has also eased off since the mid-1990s. Estrada's study links that to the 1987 Montreal Protocol that banned the release of CFCs — once used widely in refrigerants, solvents and propellants — to stop ozone depletion, which allowed more warming solar radiation to reach Earth. Temperatures today might have been 0.1 °C warmer had CFC emissions continued unabated, according to a commentary to be published alongside the study2.

“Without the Montreal Protocol, we’d be warmer than we are now,” agrees Salawitch. “But I question whether the recent pause in global warming is due to that.” Estrada's study would be stronger had it also considered changes in ocean heat uptake and aerosol cooling, he says.

“It’s a careful examination and offers some strength to the argument that the change in accumulation rates of radiative forces in the atmosphere do influence temperature, but it is a correlation”, not a proof of causation, says James Butler, director of global monitoring at the Earth System Research Laboratory of the US National Oceanic and Atmospheric Administration in Boulder, Colorado.

The World Meteorological Organization in Geneva, Switzerland, released a report3 on 6 November showing that emissions of CO2, methane and another greenhouse gas called nitrous oxide continue to rise. The heat-trapping effect of long-lived greenhouse gases in the atmosphere has grown by nearly one-third between 1990 and 2012. International negotiators are gathering in Warsaw this month for a United Nations climate-change meeting to forge the beginnings of an agreement to replace the 1997 Kyoto Protocol, which aimed to reduce emissions of greenhouse gases.