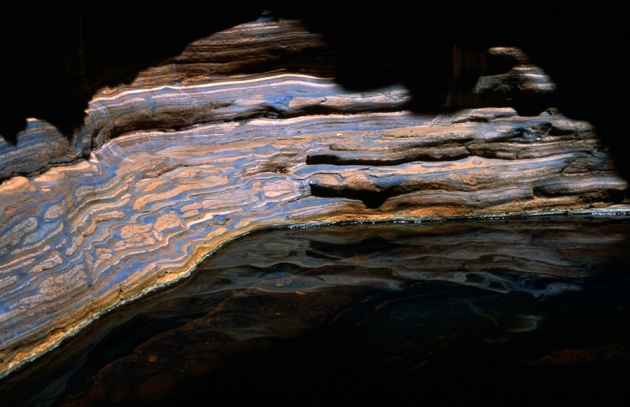 One of the biggest riddles in Earth's history is why animals did not evolve after a spike in oxygen levels approximately 2.3 billion years ago. Instead, despite what scientists had thought was a period of relatively high oxygen, the evolution of life on Earth stalled for what is dubbed the ‘boring billion’.1

Earth’s early atmosphere has seen two major spikes in oxygen concentration — one roughly 2.3 billion years ago, dubbed the ‘great oxygenation event’, and a second 800 million years ago. The evolution of complex life only took off after this second peak. Now researchers say that fluctuations in oxygen levels probably kept evolution in check during the intervening period.

Rather than accumulating steadily, new findings suggest oxygen levels dropped precipitously soon after the first peak, which saw concentrations of the gas jump by at least 1,000-fold.

“There has been this question as to why the boring billion was boring,” said Timothy Lyons, a biogeochemist at the University of California, Riverside, and one of the study team.

The finding argues against “a simplistic view of a unidirectional march towards high oxygen levels", says Noah Planavsky, a biogeochemist at Yale University in New Haven, Connecticut, who presented the work at the Third International Conference on Geobiology last month in Wuhan, China. “Oxygen levels were in fact very dynamic, going up and down until they passed a threshold and pushed the planet to a different state,” he says.

But some researchers dispute the central role of oxygen in the advent of animals in the first place, and think that other environmental cues, such as trace metals important for enzyme functions, might still have been needed. Others suspect the prolonged hiatus in evolution may be down to it taking a long time to develop the necessary genetic machinery.

“But there hasn’t been any evidence” to support either view, says Planavsky.

An earlier analysis based on the oxidation state of deep-ocean waters analysed from sediment cores found that oxygen concentrations during the boring billion could have been as high as 40% of present atmospheric levels2.But to make such inference, “you’d need to make a lot of assumptions that are probably not correct”, says Lyons.

Planavsky and his team harnessed an approach based on tracing the movement of chromium isotopes from land to ocean, which is highly sensitive to atmospheric oxygen levels3, 4.

A tiny amount of oxygen can convert an insoluble form of chromium, part of the continental crust, to a soluble one, which is then washed out to the oceans in rainwater and river runoff, where it is reduced through a reaction with iron and precipitated in deposits of ironstone.

As the heavier chromium isotope 53Cr is more sensitive to oxidization than 52Cr, analysing the ratio of chromium isotopes in these ironstones, and then comparing them to that found in ironstones exposed to a known oxygen level can open “a window on to oxygen levels in the distant past”, says Planavsky.

By studying ancient ironstones from Australia, Canada, China and the United States, the researchers found that oxygen levels were very low at various stages of the boring billion — below 0.1% of present atmospheric levels. The earliest sign of significant chromium oxidation — suggesting high atmospheric oxygen levels — occurred around 800 million years ago.

“It’s a very important finding,” says Malcolm Walter, a geobiologist at the University of New South Wales in Sydney, Australia, who was not involved in the study. He thinks it suggests that atmospheric oxygen levels were “a key environmental constraint on animal evolution”.

Walter stresses, however, that genetic innovations are also crucial for the evolution and diversification of complex life. The evolutionary engine did not truly rev up for another 260 million years after the second oxygenation event, when the Cambrian Explosion gave rise to modern animal phyla in just 20 million years — a geological blink of the eye.

“Until the environment was right, and until genetics tools were there, [the evolution of complex life] couldn’t have happened,” says Walter.

A typographical error in this article meant that it said that the Cambrian Explosion gave rise to modern animal phyla 20 million years ago, rather than in a period of just 20 million years. The text has now been corrected.