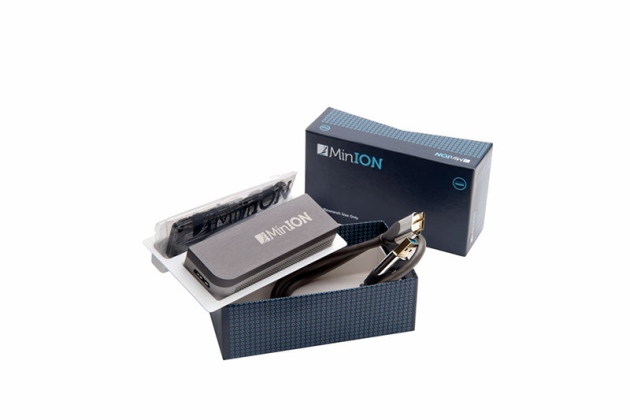 A good first shot, but not a game-changer — yet. That seems to be the consensus among scientists after today's first public release of data produced by the MinION, an advanced and highly anticipated DNA-sequencing device developed by UK company Oxford Nanopore Technologies.

The company is aiming for MinION to be the first commercially available sequencer that uses nanopore technology, which has been in development for nearly two decades. The approach identifies bases of DNA by measuring the changes they generate in electrical conductivity as fragments of DNA pass through a biological pore. Oxford Nanopore says that its nanopore machines will be faster and cheaper than existing sequencing technologies, and will allow scientists to analyse regions of the genome that cannot be amplified — copied into multiple, identical fragments for testing.

The MinION is not yet for sale. But David Jaffe, a computational biologist at the Broad Institute in Cambridge, Massachusetts, used data produced by the device and provided by Oxford Nanopore to aid in the assembly of two bacterial genomes — those of Escherichia coli and a bacterium from the genus Scardovia that is found in the human mouth. He presented his results today at the Advances in Genome Biology and Technology meeting in Marco Island, Florida.

“It’s kind of a cute device,” says Jaffe of the MinION, which is roughly the size and shape of a packet of chewing gum. “It has pretty lights and a fan that hums pleasantly, and plugs into a USB drive.” But his technical review is mixed.

The average length of the sequences generated on the MinION is 5.4 kilobases, with some as long as 10 kilobases. That is longer than the average read out delivered by the current dominant sequencing technology, sold by Illumina of San Diego, California, which delivers fragments of DNA that are hundreds of base pairs long. But the median length of the MinION’s reads is shorter than the target that Oxford Nanopore announced in 2012.

Jaffe also found that the MinION seemed to have difficulty sequencing particular parts of the bacterial genomes that he studied. That is worrisome to bioinformaticians, because it is more challenging to correct for systematic sequencing errors than random ones. In Jaffe's case, the recurring errors prevented him from assembling the complete genome sequences of the two bacteria from scratch using only MinION data; instead, he used MinION sequences to supplement data generated by Illumina machines.

But he sounded optimistic about the MinION's future. Oxford Nanopore has said that higher-quality DNA or different preparation methods should increase the average read length. Jaffe says that the company can work to eliminate errors, perhaps by using a variety of pores with different properties. But even now, he says, most long MinION reads had lengthy stretches without any mistakes. The systematic errors are “a temporary feature that we hope they'll figure out how to solve”.

Other researchers will soon have a chance to form their own opinions about the device, as Oxford Nanopore today launched its early-access programme. Researchers who pay a US$1,000 deposit, plus $250 for shipping costs, can receive their own MinIONs to begin testing the machines in their labs.

But Isaac Ro, an analyst at US investment bank Goldman Sachs — which advised Illumina in 2012 when it fought off a takeover bid by the Swiss drug giant Roche — called Jaffe's presentation “underwhelming”. “Oxford Nanopore still appears to be in development mode and, in our view, is unlikely to threaten [Illumina’s] competitive position at this time,” Ro said in a research note.

However, some scientists think that the MinION has potential to shake up the sequencing industry. Geneticist Yaniv Erlich of the Whitehead Institute for Biomedical Research in Cambridge, Massachusetts, says that the small, cheap and portable MinION is a welcome change from the bulky, pricey sequencing machines that scientists are used to. If Oxford Nanopore continues to improve the technology, he says, it will enable a range of applications that are not possible today, such as the use of sequencers outside the lab.

“This reminds me of the early days of Illumina, when all we could get were 36-base-pair reads, and we were all very excited about that,” says Erlich. “I think we should give [Oxford Nanopore] more time.”