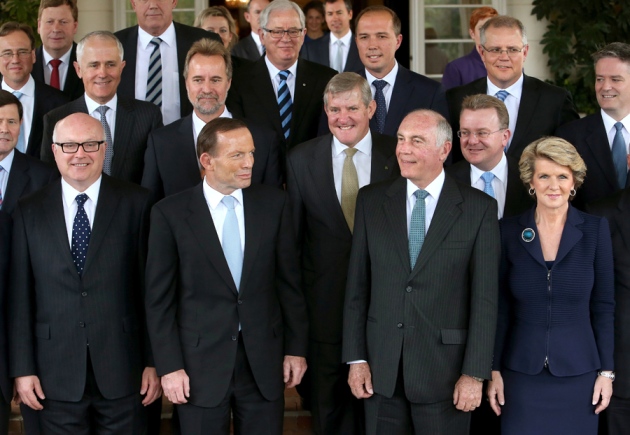 Changes made by Australia’s newly elected conservative government, sworn in on 18 September, are unnerving scientists. Prime Minister Tony Abbott was quick to renew his pre-election pledge to axe the country’s carbon-pricing scheme, and the Coalition administration has begun to kill off some of the main government agencies tasked with tackling climate change. Abbott opted not to appoint a single minister for science, deciding instead to spread responsibility for it over several ministries, including industry and education.

It is a tricky time for people working in carbon policy in Australia, and scientists are worried that research into global warming is under threat. David Karoly, an atmospheric scientist at the University of Melbourne, says that it is unclear whether funding for climate-change studies, including those conducted by the Bureau of Meteorology and Australia’s national science agency, the Commonwealth Scientific and Industrial Research Organisation (CSIRO), will be held at current levels.

University research may also be vulnerable. “There are fears about the funding of climate-change research, particularly on mitigation,” says Karoly. 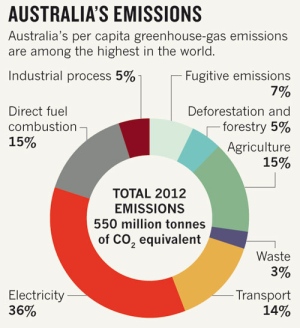 Australia is a world leader in climate-change research. As one of the world’s biggest emitters of greenhouse gases per capita (see ‘Australia’s emissions’), its scientists have been a big part of the Intergovernmental Panel on Climate Change. Overall, the country has a high scientific output (see ‘Punching above its weight’). But some fear that this work may be in jeopardy. The government has already closed the country’s Climate Commission, a public-education body, although plans are afoot to revive it as a private entity. And the government wants to close the Climate Change Authority, which provides advice on emissions reductions, says Karoly, a member of the authority’s board.

The Clean Energy Finance Corporation, or ‘green bank’, a Aus$10-billion (US$9.4-billion), 5-year programme established by the former administration to provide loans for the commercialization and deployment of clean-energy technologies, is also under threat.

Responsibility for carbon policy will form part of the environment portfolio, held by minister Greg Hunt. Until now, the centrepiece of the policy was the carbon ‘tax’ introduced in 2012 by the Labor government, with support from the Greens. The price was not strictly a tax, but, rather, was a permit system that functioned similarly to a tax, and was intended to become an emissions-trading scheme in 2015. Australia’s 260 largest emitters faced a price of Aus$24 per tonne of carbon dioxide emitted, says Frank Jotzo, a climate-change economist at the Australian National University in Canberra. He says that the price is about three times that set by the current emissions-trading scheme of the European Union. 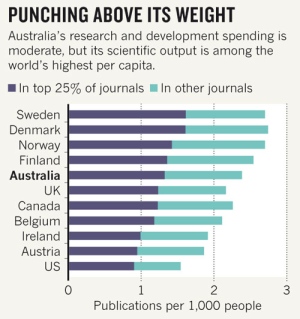 But the Coalition looks set to act on its promise to replace the system with a ‘direct action’ plan, which it hopes will meet Australia’s target to cut greenhouse-gas emissions by 5% from 2000 levels by 2020. Direct action focuses on government payments to companies that cut their emissions below a specific level, Jotzo says.

Last week, responding to the release of the IPCC’s latest report, Hunt said in a statement that the report reinforces the government’s “bipartisan support for the science and the targets set for emissions reductions”. However, the government’s stance on carbon policy and the science-policy vacuum since it came to power have fuelled fears about support for climate-science research.

The Coalition released few science policies during its election campaign or when it first came to power, but the scientific community was taken by surprise by Abbott’s decision that his “back-to-basics” government would lack a designated minister of science. The government said that the move was aimed at simplifying ministerial and departmental titles. (Critics have pointed out that the incoming government has designated a sports minister.)

Responsibility for university research rests with the education ministry, but oversight of government research agencies such as the CSIRO now falls under the purview of the industry minister, Ian Macfarlane.

The industry portfolio will also include natural-resources policy, an area that will consume much of Macfarlane’s time, says Kim Carr, former minister for innovation, industry, science and research, and for higher education, who is now the shadow minister for those portfolios.

“There are fears about the funding of climate-change research, particularly on mitigation.”

“I championed the idea of building an innovation portfolio,” Carr says. “It was about putting science and research at the centre of the transformation of Australian society. My concern was that if it was in the education area alone, there was a real chance that it would be marginalized. The political attention always goes to the teaching programme, not the research programme.” Macfarlane was unavailable for comment.

John Rice, executive director of the Australian Council of Deans of Science, an organization that promotes the development of science in universities, says that the new portfolio configuration poses a “considerable challenge for the government in creating a strong interplay between basic research and innovation”.

“I would have thought this government, more than any other, would have recognized the importance of science in supporting the economy,” he says.

However, Michael Gallagher, executive director of the Group of Eight, an organization based in Canberra that represents Australia’s research-intensive universities, welcomes the move. “There is a narrow culture of short-term, commercially oriented research prevailing in an industry portfolio, whereas Abbott has a broader view of what universities are about,” he says.

Christopher Pyne, the education minister, says that the CSIRO and universities will continue to work closely together. “Changing the structure of portfolios will not have an impact on that,” he says.

He adds that there will be no cuts to university research, but “some funding will be re­prioritized for medical research”. He did not respond to a question about the fate of climate-change research.