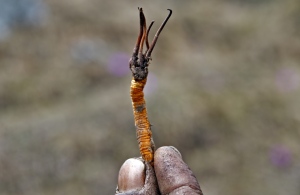 Aphrodisiac qualities — whether real or delusory — make a caterpillar fungus pricier than gold, potentially driving it toward extinction.

Yarsagumba, the world’s most expensive medicinal fungus, is in serious decline in Nepal because of over-harvesting, researchers warn in a study due to appear in the journal Biological Conservation1.

Known as ‘Himalayan Viagra' because of its supposed libido-boosting powers, the fungus can fetch as much as US$100 per gramme on the Chinese market, making it pricier than gold.

The exotic species is often regarded as a symbol of wealth and power in China, and as the country’s economy has boomed, the fungus “has enjoyed unprecedented popularity”, says one of the study’s co-authors, Kamaljit Bawa, a conservation biologist at the University of Massachusetts in Boston. Based on estimates of the volume of trade2 and average retail prices, Uttam Babu Shrestha, the study's lead author, puts the global market at betwen $5 billion and $11 billion per year.

The high price and rising demand are driving a fungus gold rush in poverty-stricken rural communities in Himalayan countries, but the impact on biodiversity and ecosystems has received little attention until now, says Bawa.

Native to the meadows of the Himalayas and Tibetan plateau at 3,000–5,000 metres above sea level, yarsagumba (Ophiocordyceps sinensis) is prescribed in traditional Chinese and Tibetan medicine for a wide range of conditions including impotence, asthma and cancer.

The peculiar life cycle of the fungus has also earned it the names 'winter worm, summer grass' and 'caterpillar fungus'. In late summer, the fungus spores infect moth larvae that live in the soil. The fungus grows inside the caterpillar, mummifying it and steering it into a position a few centimetres below the soil surface, with the head pointing upwards. Just before winter sets in and the soil freezes, a small bud forms and pushes up out of the caterpillar's head. The following spring, a brownish fruiting body — a mushroom — emerges from the soil.

In an attempt to assess the effects of collecting the fungus in Nepal, the study’s authors interviewed more than 200 harvesters in Dolpa, western Nepal, a region that is home to 60,000 harvesters and contributes about 40% of the total fungus yield in the country.

They found that the annual trade fell by more than 50% from its 2009 peak to 2011, with most harvesters believing that it had become more difficult to find the fungus. “The villagers spend more time in the field but are getting fewer fungi,” Shrestha says.

The decline in the abundance of the fungus may have prompted harvesters to pick all of the fungi they could find, says Shrestha. The researchers found that about 94% of the fungi collected by the villagers had not yet reached reproductive maturity, which is when spores form and disperse into the soil. “This would probably reduce the yield in the following year,” he says.

“There is a similar trend in other Himalayan countries, such as China, India and Bhutan,” says Liu Xingzhong, a mycologist in the Chinese Academy of Sciences’ Institute of Microbiology in Beijing. On the Tibetan plateau, for instance, the fungus harvest per unit area has dropped by 10–30% compared with three decades ago.

If the caterpillar fungus disappears, says Liu, it could lead to an uncontrolled proliferation of the larvae and moths, triggering a series of changes in the fragile mountain ecosystems.

And because hundreds of harvesters typically work in a limited area, they too could damage the ecosystem with their digging tools and by compacting the soil, says Shrestha. Bawa speculates that other factors may also be contributing to the decline of the fungus — in particular, rising temperatures and less snow in the eastern Himalayas as a result of climate change.

Bawa says that the study’s findings indicate a need for long-term monitoring and management plans for sustainable harvest of the fungus. The harvest season, for instance, should be shortened to allow enough fungi to mature and spread their spores. A rotational system for the harvest should also be implemented, so that the meadow has the chance to recover from human impact, he says.

Without such regulations, “we will soon see the end of the fungus boom”, says Shrestha. “It will have devastating consequences for the ecosystems and local economy.”