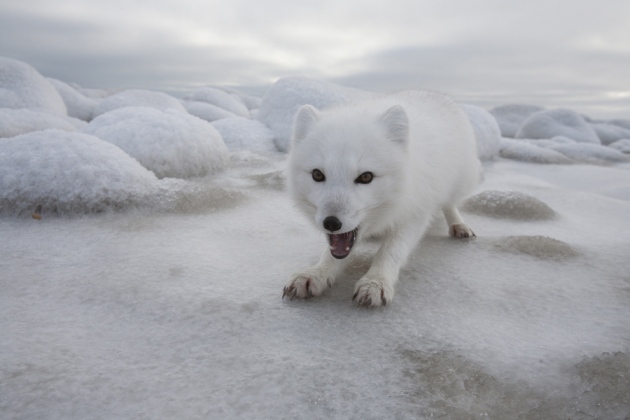 The Arctic fox (Vulpes lagopus) was thought to have evolved in Europe as the ice sheet expanded when a glacial period swept the Earth about 2.6 million years ago. But fossil evidence now suggests that the animal ‘pre-adapted’ to living in the cold and harsh environment on lofty Tibetan terrains.

While hiking up and down Tibetan mountains, Xiaoming Wang, a vertebrate palaeontologist at the Natural History Museum of Los Angeles County in California, and his colleagues stumbled on some jawbones and teeth in rocks up to 4,730 metres above sea level.

The fossils — unearthed from the Zanda Basin and the Kunlun Pass Basin in the Tibetan Plateau — do not match any of the roughly 20 known fox species, and so represent a new species, Wang and his team report today in Proceedings of the Royal Society B1. The team named the species Vulpes qiuzhudingi, in honour of Qiu Zhuding, a prominent palaeontologist at the Chinese Academy of Sciences in Beijing. 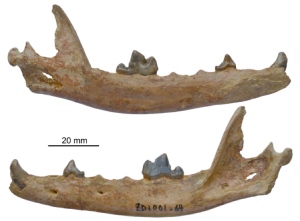 The first lower molar of the newly identified species has a cutting edge adapted to an all-meat diet, similar to that seen in modern arctic foxes.

Most foxes eat both meat and plants. But V. qiuzhudingi's teeth are those of an animal that eats mostly meat, and are typical of predators living in extremely cold environments, including polar bears, Arctic foxes and Arctic wolves. “The new Tibetan species and the Arctic fox show striking similarity in their dental adaptation for extreme meat-eating,” says Wang.

The specimens were excavated from rocks about 3.6 million to 5.1 million years old. “They are the first Arctic-fox-like fossils to be found from outside the Arctic regions, and they pre-date the oldest records by 3 million to 4 million years,” says Wang. “The scenario seems to be clear that we have an ancestor of Arctic foxes in high Tibet.”

Mikael Fortelius, an evolutionary palaeontologist at the University of Helsinki, says that the Arctic fox is just one of several iconic Ice Age animals to have their ancestry traced back to the Tibetan Plateau — other examples being the woolly rhino (Coelodonta thibetana)2 and the snow leopard (Uncia uncia). The study “lends strong support to the 'out of Tibet' hypothesis”, which proposes that animals adapted to a cold, snowy climate in Tibet then spread to other parts of the world as their habitats expanded during ice ages, Fortelius says.

But not everyone is convinced. “The evidence for Arctic foxes being another Tibetan descendent is not particularly strong,” says Lars Werdelin, a vertebrate palaeontologist at the Swedish Museum of Natural History in Stockholm.

The fact that this Tibetan species and the Arctic fox are the only two extreme meat-eaters among all fox species does not necessarily suggest one gave rise to another, he says. “It’s equally plausible that the feature evolved independently in response to similar climate conditions.”

The huge time gap in the fossil record makes it difficult to know which scenario is correct, says Werdelin. “We'd need much younger materials, preferably 1.5 million to 2 million years old, to pinpoint a definitive phylogenic relationship between them.”