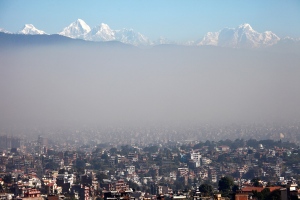 Atmospheric pollution from cities such as Kathmandu drifts up to the Himalayas and the Tibetan Plateau, where persistent chemicals can accumulate.

Toxic chemicals are accumulating in the ecosystems of the Himalayas and the Tibetan plateau, researchers warn in the the first comprehensive study to assess levels of certain organic pollutants in that part of the world.

“The rigour and quality of the work are impressive,” says Surendra Singh, an ecologist at the Forest Research Institute in Dehradun. “It’s the first study to quantify the accumulation of [persistent organic pollutants] in ecosystems in the region.”

Persistent organic pollutants (POPs) are carbon-based compounds that are resistant to break-down. Some originate from the burning of fuel or the processing of electronic waste, and others are widely used as pesticides or herbicides or in the manufacture of solvents, plastics and pharmaceuticals. Some POPs, such as the pesticide dichlorodiphenyltrichloroethane (DDT) and the herbicide Agent Orange, can cause diseases such as cancers, neurological disorders, reproductive dysfunction and birth defects.

Many POPs are volatile and insoluble, and can travel a long distance. “They tend to evaporate in hot places, hitch a ride on winds, and then condense in cold regions,” says Xu Baiqing, an environmental scientist at the Institute of Tibetan Plateau Research in Beijing.

In 2008, Xu and his colleagues first reported the presence of DDT, hexachlorocyclohexanes (HCHs), and polycyclic aromatic hydrocarbons (PAHs) in the East Rongbuk Glacier near Mount Everest1. “Their levels correlate well with human use of those chemicals,” says Wang Xiaoping, an environment scientist at the ITP who was lead author of that study. For instance, the amount of DDT fell sharply during the 1970s, when many European countries started to ban its use, but rose again after 1990s, when its use rose heavily in the Indian subcontinent. Other POPs continue to be commonly used in many developing countries.

That was not an isolated incident. At the fourth Third Pole Environment Workshop, held on 1–3 April in Dehradun, India, Xu reported that ice cores from across the Himalayas and Tibetan plateau are rife with those toxic compounds.

To trace the sources of those pollutants, Xu and his colleagues correlated meteorological measurements with chemical compositions of air parcels sampled at 16 locations across the region. They found that POPs in the western Tibetan plateau were transported by the westerly winds from Europe and Africa, whereas those in the southern and southeastern regions were brought by the Indian monsoon from South Asia2, 3.

More alarmingly, the researchers also detected large amounts of POPs in various components of the ecosystems such as soil, grass, trees and fish in the Himalayas and in the Tibetan plateau, especially at the highest elevations. “Their levels increase in orders of magnitude as they move further along the food chain,” says Xu. The amounts of DDT in leaves are up to four times higher than those found in boreal forests in the Arctic. “If the trend continues, the forests might reach a critical threshold in the next a few decades,” he says.

The results “are another warning of the way we use chemicals”, says David Molden, director of the Integrated Centre for Integrated Mountain Development in Kathmandu.

Because some persistent compounds accumulate at the top of the food chain, humans can be exposed to POPs by eating meat and fish. And the mountain communities are hit hardest, researchers say. “They do not emit any of those toxic compounds,” says Xu, “but are forced to shoulder the burden of their impact.”