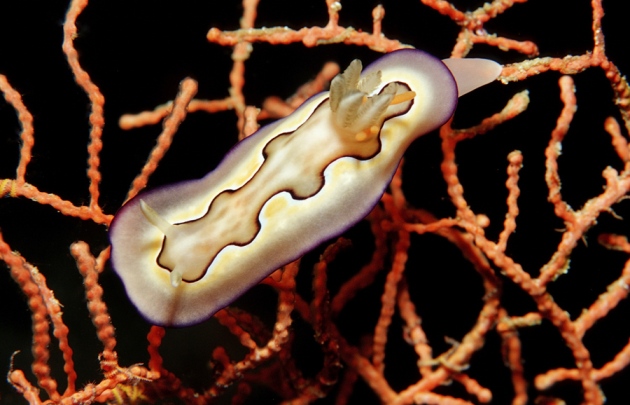 Nudibranch sea slugs are among a host of invertebrate species that could face extinction.

One in five of the world’s invertebrate species are threatened with extinction, according to the latest report from the Zoological Society of London (ZSL).

From the checkerspot butterfly to the giant squid, spineless creatures are thought to represent around 99% of biodiversity on Earth. However, until now, scientists have never attempted a comprehensive review of their conservation status. In fact, fewer than 1% of invertebrates had been assessed by the International Union for Conservation of Nature (IUCN), which has listed threatened species on its Red List since 1963.

“When I first took a look at the Red List, it was biased towards larger, more charismatic species,” says Ben Collen, a biodiversity scientist at the ZSL Institute of Zoology in London, who coordinated the invertebrate study and co-edited the report. “The project we’ve been running for the past five years tries to put invertebrates on the Red List in a systematic way.”

Collen and his colleagues conclude that the greatest threat is to freshwater invertebrates, including crabs and snails, followed by terrestrial and marine invertebrates. More mobile animals, such as butterflies and dragonflies, tended to have the least risk of extinction.

The report estimates that 34% of freshwater invertebrates could be under threat, including more than half of the world's freshwater snails and slugs. In the southeastern United States, which is a freshwater diversity hotspot, almost 40% of molluscs and crayfish could be wiped out owing to the effects of dams and pollution. In the oceans, almost one-third of reef-building corals are endangered largely because of climate change, which causes coral bleaching and ocean acidification.

Overall, habitat loss, pollution and invasive species represented the biggest threats to invertebrate diversity around the world. The proportion of species at risk (one-fifth) is similar to findings in vertebrates and plants. The report will be formally presented on 7 September at the World Conservation Congress in Jeju, South Korea, where conservationists, scientists and government leaders will meet to discuss conservation and development issues.

Because of the lack of information on threats to invertebrates and because so many species are thought to remain unidentified, Collen and his collaborators used a 'sampled approach' to evaluate 1,500 known species in each of 4 representative taxonomic groups — freshwater molluscs, dragonflies, dung beetles and butterflies. They used standard IUCN criteria1 that take into account population trends and the geographic ranges of species. They also included comprehensive assessments of crayfish, freshwater crabs, reef-building corals and cephalopods in the evaluation.

Overall, Collen says that he and his team queried thousands of experts by e-mail and convened a series of workshops to help gather data on the prevalence of invertebrate species. They supplemented this with data from independent taxonomic and regional assessments, such as the IUCN's Pan-Africa Freshwater Biodiversity Assessment, bringing the total number of invertebrate species in their study to over 12,000.

Although specialists applaud the focus on under-appreciated taxa, some feel that it is premature to draw conclusions from a limited sample. “I hope that it gets the attention from policy-makers that it deserves,” says Terry Erwin, an entomologist at the Smithsonian Institution in Washington DC. “The numbers they use are good enough for public consumption, although not very accurate scientifically.”

Camilo Mora, a marine biodiversity expert at the University of Hawaii at Manoa, agrees that the sample is too small to make generalizations. “It’s like using a thermometer to measure the temperature at the beach and expecting that that reflects the temperature of the entire ocean,” he says.

Others expressed more fundamental concerns with applying the IUCN criteria to invertebrates. Last year, Pedro Cardoso, an entomologist at the Finnish Museum of Natural History in Helsinki and his colleagues studied 48 species of arthropods and spiders, and found that most species for which there were sufficient data would be classified as threatened owing to their limited geographic ranges on islands and low dispersal abilities2. “With the current thresholds, it’s hard to say something about the status of most invertebrate species,” he says.

Collen responds that the IUCN criteria have been successfully applied to a wide range of species and that it is vital to have a consistent scheme. Even if a species has persisted for millennia on a small island, it just takes one commercial development to wipe it out. “We see that in the extinction record,” he says. “These are ephemeral places.”