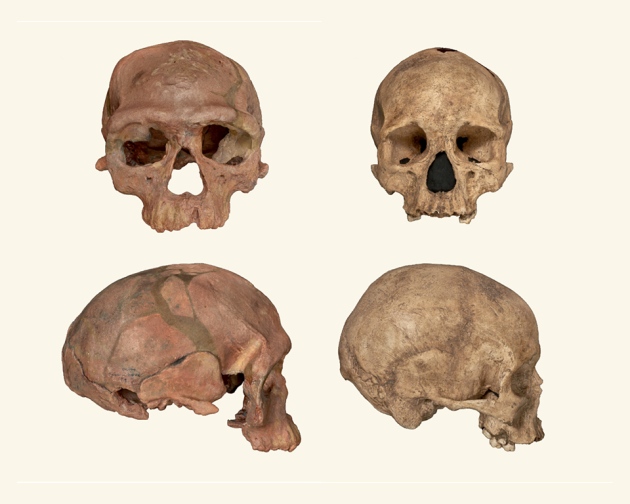 Researchers say that they have found the oldest Homo sapiens remains on record in an improbable place: Morocco.

At an archaeological site near the Atlantic coast, finds of skull, face and jaw bones identified as being from early members of our species have been dated to about 315,000 years ago. That indicates H. sapiens appeared more than 100,000 years earlier than thought: most researchers have placed the origins of our species in East Africa about 200,000 years ago.

The finds, which are published on 7 June in Nature1, 2, do not mean that H. sapiens originated in North Africa. Instead, they suggest that the species' earliest members evolved all across the continent, scientists say.

How China is rewriting the book on human origins

“Until now, the common wisdom was that our species emerged probably rather quickly somewhere in a ‘Garden of Eden’ that was located most likely in sub-Saharan Africa,” says Jean-Jacques Hublin, an author of the study and a director at the Max Planck Institute for Evolutionary Anthropology in Leipzig, Germany. Now, “I would say the Garden of Eden in Africa is probably Africa — and it’s a big, big garden.” Hublin was one of the leaders of the decade-long excavation at the Moroccan site, called Jebel Irhoud.

Hublin first became familiar with Jebel Irhoud in the early 1980s, when he was shown a puzzling specimen of a lower jawbone of a child from the site. Miners had discovered a nearly complete human skull there in 1961; later excavations had also found a braincase, as well as sophisticated stone tools and other signs of human presence.

The bones “looked far too primitive to be anything understandable, so people came up with some weird ideas”, Hublin says. Researchers guessed they were 40,000 years old and proposed that Neanderthals had lived in North Africa.

More recently, researchers have suggested that the Jebel Irhoud humans were an ‘archaic’ species that survived in North Africa until H. sapiens from south of the Sahara replaced them. East Africa is where most scientists place our species’ origins: two of the oldest known H. sapiens fossils — 196,000 and 160,000-year-old skulls3, 4 — come from Ethiopia, and DNA studies of present-day populations around the globe point to an African origin some 200,000 years ago5.

Hublin first visited Jebel Irhoud in the 1990s, only to find the site buried. He didn’t have the time or money to excavate it until 2004, after he had joined the Max Planck Society. His team rented a tractor and bulldozer to remove some 200 cubic metres of rock that blocked access.

Their initial goal was to re-date the site using newer methods, but in the late 2000s, the team uncovered more than 20 new human bones relating to at least five individuals, including a remarkably complete jaw, skull fragments and stone tools. A team led by archaeological scientist Daniel Richter and archaeologist Shannon McPherron, also at the Max Planck Institute for Evolutionary Anthropology, dated the site and all the human remains found there to between 280,000 and 350,000 years old using two different methods.

The re-dating and the tranche of new human bones convince Hublin that early H. sapiens once lived at Jebel Irhoud. “It’s a face you could cross in the street today,” he says. The teeth — although big compared with those of today's humans — are a better match to H. sapiens than they are to Neanderthals or other archaic humans. And the Jebel Irhoud skulls, elongated compared with those of later H. sapiens, suggest that these individuals' brains were organized differently. 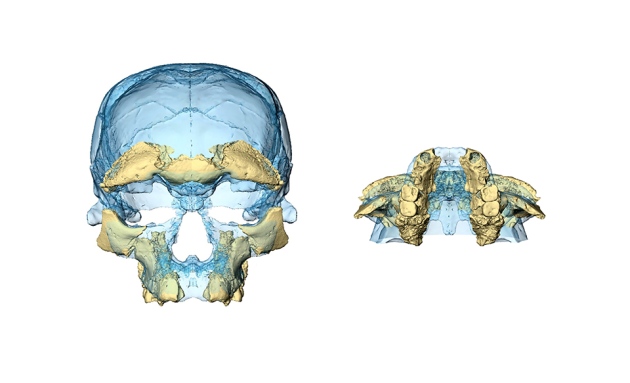 A facial reconstruction of fragments of an early Homo sapiens skull found at Jebel Irhoud, Morocco.

This offers clues about the evolution of the H. sapiens lineage into today’s anatomically modern humans. Hublin suggests that anatomically modern humans may have acquired their characteristic faces before changes to the shape of their brains occurred. Moreover, the mix of features seen in the Jebel Irhoud remains and other H. sapiens-like fossils from elsewhere in Africa point to a diverse genesis for our species, and raises doubt about an exclusively East African origin.

“What we think is before 300,000 years ago, there was a dispersal of our species — or at least the most primitive version of our species — throughout Africa,” Hublin says. Around this time, the Sahara was green and filled with lakes and rivers. Animals that roamed the East African savanna, including gazelles, wildebeest and lions, also lived near Jebel Irhoud, suggesting that these environments were once linked.

An earlier origin for H. sapiens is further supported by an ancient-DNA study posted to the bioRxiv preprint server on 5 June6. Researchers led by Mattias Jakobsson at Uppsala University in Sweden sequenced the genome of a boy who lived in South Africa around 2,000 years ago — only the second ancient genome from sub-Saharan Africa to be sequenced. They determined that his ancestors on the H. sapiens lineage split from those of some other present-day African populations more than 260,000 years ago.

Hublin says his team tried and failed to obtain DNA from the Jebel Irhoud bones. A genomic analysis could have clearly established whether the remains lie on the lineage that leads to modern humans.

Palaeontologist Jeffrey Schwartz, at the University of Pittsburgh, Pennsylvania, says the new finds are important — but he is not convinced that they should be considered H. sapiens. Too many different-looking fossils have been lumped together under the species, he thinks, complicating efforts to interpret new fossils and to come up with scenarios on how, when and where our species emerged.

“Homo sapiens, despite being so well known, was a species without a past until now,” says María Martínon-Torres, a palaeoanthropologist at University College London, noting the scarcity of fossils linked to human origins in Africa. But the lack of features that, she says, define our species — such as a prominent chin and forehead — convince her that the Jebel Irhoud remains should not be considered H. sapiens. 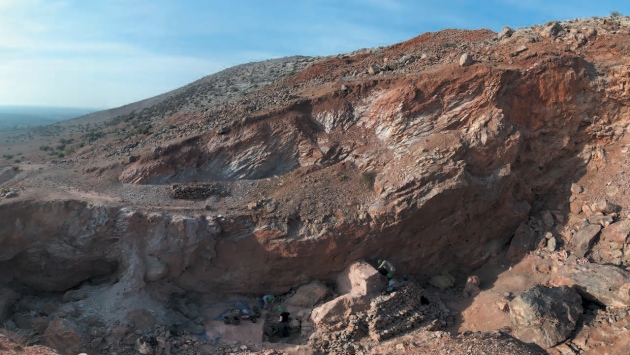 The site in Jebel Irhoud, Morocco. When the site was occupied by early humans, it would have been a cave; the covering rock and much sediment was removed by work in the 1960s.

Chris Stringer, a palaeoanthropologist at the Natural History Museum in London, who co-authored a News & Views article accompanying the studies, says he was baffled by the Jebel Irhoud remains when he first saw them in the early 1970s. He knew that they weren’t Neanderthals, but they seemed too young and primitive-looking to be H. sapiens. But with the older dates and the new bones, Stringer agrees that the Jebel Irhoud bones stand firmly on the H. sapiens lineage. “They shift Morocco from a supposed backwater in the evolution of our species to a prominent position,” he adds.

For Hublin, who was born in nearby Algeria and fled at the age of eight when its war of independence began, returning to North Africa to a site that has captivated him for decades was an emotional experience. “I feel like I have a personal relationship with this site,” he says. “I cannot say we closed a chapter, but we came to such an amazing conclusion after this very long journey. It blows my mind.”

An earlier version of this story misstated excavation dates of the Jebel Irhoud site.