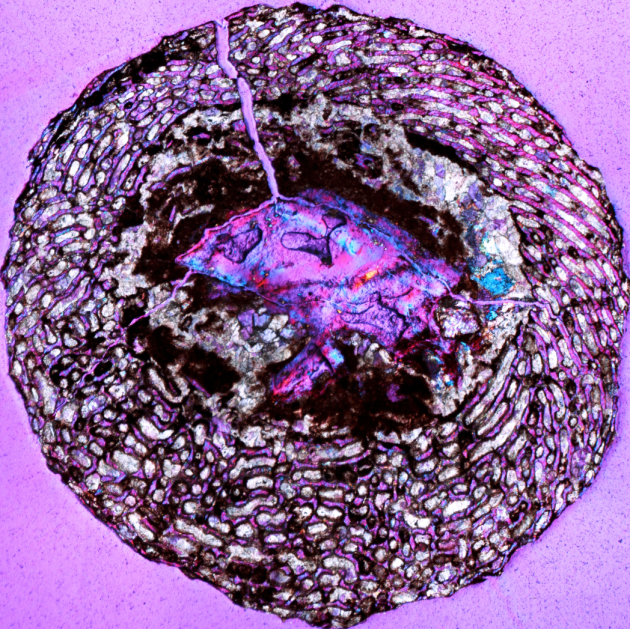 Bones from Lufengosaurus embryos (like this femur shown in cross-section) have yielded new information about dinosaur development.

Palaeontologists working in China have unearthed the earliest collection of fossilized dinosaur embryos to date. The trove includes remains from many individuals at different developmental stages, providing a unique opportunity to investigate the embryonic development of a prehistoric species.

Robert Reisz, a palaeontologist at the University of Toronto in Mississauga, Canada, and his colleagues discovered the sauropodomorph fossils in a bone bed in Lufeng County that dates to the Early Jurassic period, 197 million to 190 million years ago. The site contained eggshells and more than 200 disarticulated bones — the oldest known traces of budding dinosaurs, the researchers report online today in Nature1.

But it is not just the age of the fossils that is notable, the researchers say. Spectroscopic analysis of bone-tissue samples from the Chinese nesting site revealed the oldest organic material ever seen in a terrestrial vertebrate. That was surprising because the fossilized femur bones were delicate and porous, which made them vulnerable to the corrosive effects of weathering and groundwater, says Reisz.

“That suggests to us that other dinosaur fossils might have organic remains,” he says. “We just haven’t looked at them in the right ways.”

Reisz thinks that the complex proteins his team detected in that organic material are preserved collagen. Because collagen composition varies across species, further analyses could help researchers to compare the sauropodomorph fossils with those of other creatures. They include the mighty sauropods, close relatives — and perhaps descendants — of early sauropodomorphs that weighed in at about 100,000 kilograms each, making them the largest animals ever to roam Earth.

The researchers think that the Lufeng dinosaurs are sauropodomorphs because they are similar in many ways to intact embryonic skeletons of Massospondylus, a sauropodomorph that Reisz unearthed in South Africa in 20052. But their analysis does identify key differences between the two fossil finds. The Lufeng embryos were less developmentally advanced than the Massospondylus embryos, and they seem to be examples of a different genus, Lufengosaurus.

The embryos also yielded information that could help researchers to understand how these adult sauropodomorphs — bipedal dinosaurs with long necks — were able to grow to be 9 metres long, larger than any other terrestrial animal alive during their heyday. When the scientists compared two dozen Lufengosaurus femur bones of different sizes and in various stages of development, they found evidence of rapid, sustained embryonic growth and short incubation times.

Reisz says that the dinosaurs probably maintained this extreme rate of growth after hatching in an effort to evade predation by outgrowing their predators. “This may be a model to explain gigantism in this group,” he says.