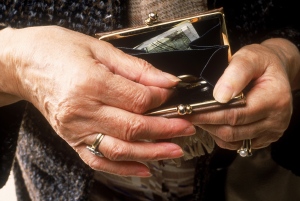 Losing money to scammers is more common in older people, and with reason, say researchers.

Stories of kindly grandmothers giving all their money away to nefarious confidence tricksters are unfortunately all too common. Now, researchers have suggested one reason why older people often seem to fall victim to financial fraud1 — our ability to judge the trustworthiness of people's faces diminishes with age, finds a US study2.

Shelley Taylor, a psychologist at the University of California, Los Angeles, and her colleagues examined how people in two age groups perceived photos of faces that had been pre-rated for trustworthiness and approachability. The faces conveyed known cues of trustworthiness4, such as a direct gaze and a sincere smile which turns fully upwards towards the eyes.

“They missed facial cues that are pretty easily distinguished,” says Taylor, adding that “most” of the older adults showed the effect. The results are published today in the Proceedings of the National Academy of Sciences2.

The team asked a further 44 participants to rate the faces for trustworthiness while undergoing functional magnetic resonance imaging (fMRI).

Younger adults showed a strong response in a region of the brain called the anterior insula, which is known to control the 'gut feelings' that inform decision-making — especially when viewing untrustworthy faces. But the older adults displayed almost no such activation, suggesting they were getting diminished or no warning signals.

“[The older adults'] brains are not saying 'be wary',” explains Taylor. “They are not getting the 'uh-oh!' signal that younger people get.”

Lis Nielsen, a psychologist at the National Institute on Aging in Bethesda, Maryland, says that this is the first time anyone has looked to see if the way older people process social information around trustworthiness might make them more susceptible to fraud.

She adds further work is needed to determine whether the observed results are caused by age-related changes in the brain, or if older adults are simply less motivated to look for social signals of untrustworthiness, which could also explain their reduced activity in that brain region. Previous work has suggested that older adults tend to remember more positive than negative information, relative to younger adults3.

Either way, notes Taylor, the outcome of failing to identify an untrustworthy person can be catastrophic, so older people need to be warned to be cautious, she says. “Limiting the contact with potential scammers is really the front line of defence —  I would tell older adults 'don't talk to salesmen pushing investments'."