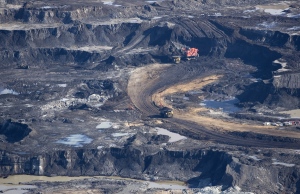 Fuel derived from Canada's oil sands would effectively be banned from the European Union if it is given a separate greenhouse-gas emissions value from conventional oil.

An attempt to assign a carbon footprint to oil obtained from oil sands, such as those in western Canada, ended in stalemate yesterday.

European Union (EU) diplomats were voting on whether to accept a proposed emissions value that would have effectively banned the fuel from being used in the EU. The lack of agreement means that the issue will now be passed to environment ministers, who are expected to make a decision in June.

In 2009, Europe introduced a Fuel Quality Directive that requires fuel suppliers to cut greenhouse-gas emissions from road fuels by 6% between 2010 and 2020. But for it to be fully implemented, all fuels must be assigned a default carbon footprint. However, policy-makers are stuggling to achieve this for oil-sands oil.

Canada is the main obstacle: it is threatening the EU with legal action if it discriminates against oil sands by making the value separate from, and significantly higher than, that for oil from other sources. The value being voted on was 107 grams of carbon dioxide equivalents per megajoule — 23% higher than that for oil from conventional sources.

Canada holds the world’s third-largest store of oil — after Saudi Arabia and Venezuela — if the oil sands are included, and it is keen to export the fuel, via US refineries, to Europe. Canada is also in the midst of negotiating a free-trade agreement with the EU.

Spain, Italy, Poland and Estonia voted against the proposal, and the Scandinavian nations for it. However, the United Kingdom, the Netherlands and France — home to oil giants BP, Shell and Total, respectively — and Germany all abstained, so the vote ended in deadlock.

“The whole issue is blowing completely out of proportion,” says one oil-company representative. Compromise proposals were tabled by, among others, the Netherlands and Italy, and may still be taken up by the ministers. They generally recognize the higher carbon footprint of oil extracted from oil sands, but do not single them out with a separate value. For example, Italy proposes incorporating the country of origin, import volume and feedstock type when calculating the overall carbon footprint for all of Europe's petrol from 2014 onwards.

Environmentalists agree that oil obtained from different sources should have different carbon footprints, but few data are available on the actual emissions generated by other sources, and that because oil-sand oil is known to generate more emissions, disincentives should be placed on its use. They also say that companies have the option of reporting actual emissions, rather than having to use the default, if they think those will be lower. Producers are also awarded credits for reducing the flaring of natural gas, which can be used to meet their fuel-quality target.

Oil companies say that biofuels are the best way to meet the 6% emission-reduction goal. However, EU policy-makers have been unable to agree on whether to introduce crop-specific indirect land-use change (ILUC) factors that recognize the extra emissions that plant feedstocks cause by displacing food crops, which in turn displaces virgin forest.

The application of such factors would sound a death knell for the European biodiesel industry. According to most scientific studies — including one by the International Food Policy Research Institute in Washington DC used by the European Commission to prepare an impact assessment and legislation — biodiesel from palm oil, soya bean and rapeseed causes a similar level of pollution to oil obtained from oil sands if the ILUC factors are included. The biodiesel industry contests the “maturity” of the science and says that the comparison is absurd.

A proposal from the European Commission is unlikely in the near future. In a sign of how politically charged the biofuels issue has become, all 27 European commissioners will reportedly be meeting to discuss it, a format usually reserved for high-level strategic issues.

The oil sands debate has no legal implications on the biofuel issue, and a decision on one has no direct bearing on the other. However, there is a political link, says Nusa Urbancic from the environmental organization Transport and Environment in Brussels. “All fuels need correct carbon accounting to count their contribution, to reach the 6% greenhouse-gas reduction target,” she says.