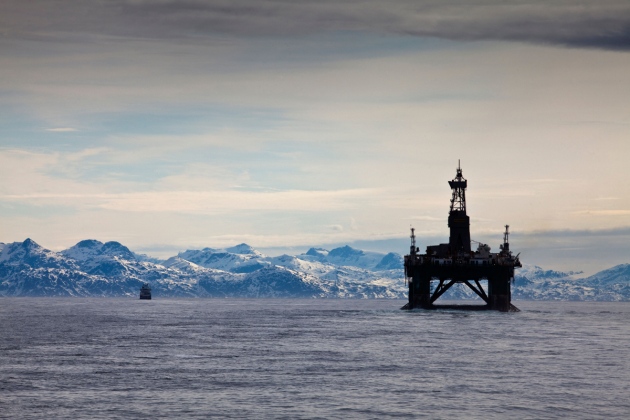 Norway's exploratory drilling rig the Leiv Eiriksson is already in action in the Davis Strait, between Greenland and Canada.

A new round of exploratory oil drilling is due to begin in the Arctic this July. Oil companies are no doubt dreaming of a northern oil rush, while environmentalists face nightmares of devastating spills.

The oil giant Shell has been granted permission by the US government to drill two exploratory wells in the Beaufort Sea and three in the Chukchi Sea, both north of Alaska, this year — between 15 July and late September. The project is finally coming to fruition after years spent fighting legal challenges. It will be the first oil-exploration programme to run in US Arctic waters since 2000, and could mark the start of the first offshore commercial drilling in the American north, although it would take another decade to establish production wells.

The US Geological Survey estimated in 2008 that the Arctic holds up to 90 billion barrels of oil — 13% of the world’s technically recoverable supply. Exploration and production is already under way on the other side of the Arctic, off Norway and Russia, for example (see The great Arctic oil race begins). Many parts of the Arctic circle are becoming ever-more accessible thanks to improved technologies and a reduction in summer sea ice because of climate change.

In a previous round of US exploration in the 1980s and 1990s, oil companies drilled a handful of wells in the Chukchi Sea and dozens in the Beaufort — but those wells didn’t prove economic enough to pursue. “Speculation is that Shell has learned a lot and may be poised to hit the jackpot this time,” says environmental chemist Jeffrey Short of JWS Consulting in Juneau, Alaska.

However, many fear that offshore drilling in the challenging conditions of the north, and around sensitive and understudied ecological systems, could spell disaster. Some contend that Shell’s emergency-response plans have holes, and that even regular operations could disrupt species such as bowhead whales. “Decisions need to be based on good science and a demonstrated ability to clean up a spill. Shell has met neither of those conditions,” says Michael LeVine, of the ocean-conservation organization Oceana in Juneau, Alaska. The US Bureau of Ocean Energy Management and the Bureau of Safety and Environmental Enforcement in Washington DC have approved Shell’s safety plans, but the company is still awaiting a final rubber stamp before work can begin.

After the disastrous blowout of the Deepwater Horizon oil rig in the Gulf of Mexico in April 2010, US President Barack Obama temporarily suspended any Arctic oil exploration. After that suspension was lifted, there was still a high regulatory bar on applications. In their oil-spill-response plans, Shell had to prepare for a worst-case scenario nearly three times bigger than in their previous plans for drilling in the Beaufort Sea, map out the possible discharge over 30 days instead of 3 days, and identify the specific equipment that would be used to mop up such a spill. The company has also agreed to start a bowhead-whale-monitoring programme from 1 August, and to suspend drilling in the Beaufort from 25 August until after locals have finished their subsistence hunts.

The company says it has taken unprecedented steps to prevent a spill, as well as in preparation to clean one up, including having an extra cut-off on blowout protectors and putting capping equipment on a ship stationed between the two sites. “It’s by no means a stretch to say Shell has set the bar extremely high for others to follow and we are proud of that,” says Shell Alaska spokesman Curtis Smith.

But this hasn’t appeased everyone. LeVine notes that Shell’s plan to contain a spill relies on skimmers and booms that he says do not work well anywhere, and can be particularly ineffective when caught up on sea ice. And, as Short observes, conditions in the area could make it hard to get extra relief ships in. “There’s no infrastructure there,” he says. “I mean none.”

LeVine says that the main problem is a lack of scientific knowledge about the baseline conditions in the region, in terms of everything from ocean currents to animal populations. “We can’t target [oil spill] responses when we don’t know where the critical areas are,” he says. Oceana estimates that the necessary baseline monitoring could be done in 5–7 years for US$20 million a year. “That sounds like a lot,” says LeVine, but he points out that the US government made US$2.7 billion from the sale of leases for the Chukchi Sea alone. Legal battles have already delayed exploration by five years, he adds. “It’s not too late to start this process.”

Oil companies are doing good science in the region: several, including Shell, are jointly funding the Chukchi Sea Environmental Studies Program, for example. The conflict, says LeVine, is about whether that science needs to be completed before drilling projects commence. “There’s a disagreement about when that needs to be done. The companies think they can gather the data while drilling,” he says.