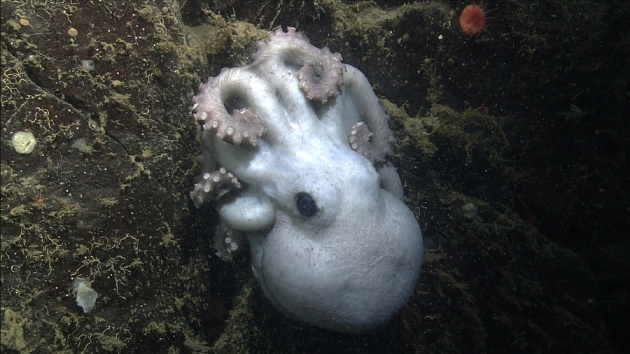 This female octopus grew frail during the years she spent brooding her eggs.

A deep-sea octopus has set a record for endurance, brooding her eggs for 53 months — longer than any other known species, researchers reported on 30 July in PLoS ONE1.

In 2007, a team from the Monterey Bay Aquarium Research Institute (MBARI) in Moss Landing, California, spotted a pregnant deep-sea octopus on a rock outcropping 1,400 metres under water — and stumbled on an opportunity to observe a species (Graneledone boreopacifica) that has not been able to survive in captivity. For years, the researchers returned regularly to the spot to find the mother tending her eggs.

"It went on and on, and we were just staggered," says Bruce Robison, a deep-sea biologist at MBARI, who led the study. "Every time we’d drop down to visit we’d say, 'This is the last time she’s going to be here.'"

Some deep-sea animals are prone to long brooding times, in part because eggs grow more slowly in the cold temperatures typical of deep waters. But the longest gestation period previously known was 14 months, in the octopus Bathypolypus arcticus2.

Robison and his colleagues have been monitoring the Pacific Ocean site where they discovered the G. boreopacifica mother for 25 years. Called Midwater 1, it is about 20 kilometres south of MBARI's base in Moss Landing. Every month or two, they use a remotely operated vehicle (ROV) to document life under the sea. For many years they worked only at depths of 50–1,000 metres below the ocean surface, but in 2005 they began examining the sea floor below their study zone. Finding an interesting rock outcropping, they decided to keep an eye on it.

The first sighting of the brooding octopus came in May 2007, when the team found her lying on the outcrop tending eggs. She had been captured on video moving towards the rocks a month before that, giving the team a rough start date for the brooding period.

"We knew right away that we had a unique opportunity," Robison says. “It was a fluke.”

The team soon dubbed the animal Octomom and began regular visits to her rocky habitat, confirming her identity by distinctive scars and using lasers mounted on their ROV to measure her eggs. An analysis of video footage showed that the octopus guarded the same eggs throughout the lengthy brooding period, and the eggs had grown larger at each sighting.

In October 2011, Octomom was gone, leaving behind only the remnants of empty egg capsules. Because the octopus was sighted in September 2011, the team was able to estimate her gestation period at roughly 53 months. "We were relieved for her that her ordeal was over," says Robison, because they watched her grow increasingly frail. "But it had become such a habit for us to go and visit that we thought, ‘Oh, now what do we do?’" 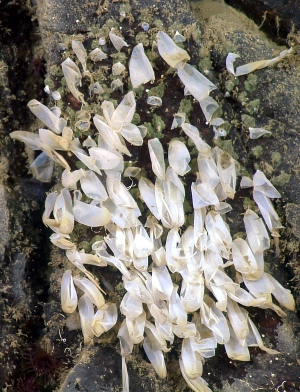 By October 2011, only empty egg sacs remained at the study site.

"I was astounded,” says Clyde Roper, a cephalopod expert at the Smithsonian National Museum of Natural History in Washington DC. "It was really far beyond what I had ever thought about. I think it’s a fabulous piece of work."

Octopuses and squids die after just one pregnancy, and researchers suspect that some, such as Octomom’s species, eat little or nothing while brooding. During the researchers’ ROV visits, the octopus was always with her eggs, and the team never saw her attempt to feed on potential prey wandering by.

The evolutionary benefit for such a gruelling maternal marathon could be that the time maximizes progeny’s chances of survival by allowing them to develop and emerge fully able to fend for themselves. Robison points out that G. boreopacifica is one of the most common deep-sea octopuses in the region, suggesting that theirs is a successful evolutionary strategy.