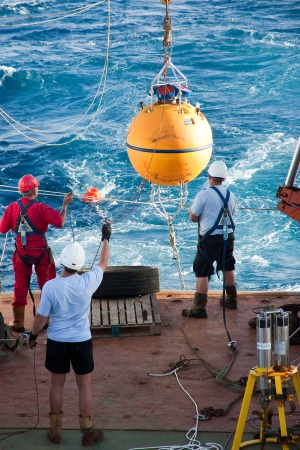 A ‘global conveyor belt’ stirs the oceans from top to bottom, with surface currents transporting warm water to the poles while cold water in the depths flows back to the tropics. But it operates in fits and starts, with the strength of the currents varying widely. Eager for a better understanding of how the vagaries of the conveyor belt shape weather and climate, oceanographers are planning two new large-scale projects to watch over Atlantic currents.

An array of instruments between Florida and the Canary Islands has been continuously monitoring the strength of the North Atlantic portion of the global conveyor belt since 2004. In December, if all goes well, an international project led by the United States will begin another set of continuous measurements of the Atlantic Meridional Overturning Circulation (AMOC), using an array of sensors strung between South Africa and Argentina. And this month, US and British funding agencies are set to decide whether they will support a new surface-to-bottom monitoring array between Labrador in Canada and Scotland, UK. The United Kingdom will also decide whether to continue operating the existing array.

Expanding such monitoring is crucial if scientists are to improve seasonal weather and climate forecasts, says Harry Bryden, an oceanographer at the University of Southampton, UK. Components of the AMOC, such as the Gulf Stream, ferry vast amounts of heat from the tropics to high latitudes, heating the winds that keep Europe’s climate mild. As a result, year-to-year and longer-term changes in the strength of these currents can affect seasonal conditions across much of Europe, Africa, South America and North America.

Observations from the UK-funded Rapid Climate Change monitoring array (RAPID) — the existing line of instrument-equipped moorings that measure current speed and direction, water temperature, salinity and pressure at various depths along the latitude line at 26.5° north — suggest that the strength of the overturning circulation can vary enormously1. In April 2009, the array recorded2 a 30% drop in average current strength that persisted for a year, reducing the amount of heat transported to the North Atlantic by almost 200 trillion watts — equal to the output of more than 100,000 large power plants.

The anomaly — much bigger than any change that models suggested could happen — was driven by unusual wind patterns, strengthening of warm surface currents and weakening of cold water flows in the deep ocean. It has been linked to the unusually harsh winter in Europe in 2009–10. Bryden wonders whether the anomaly also helped to produce unusually wet weather in the United Kingdom. “We had six lousy summers in a row in Britain,” he says. “What’s going on?” 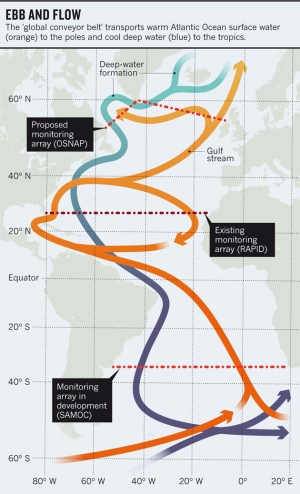 To investigate, scientists are now focusing on a crucial component of the conveyor belt: the region of the North Atlantic in which surface water heading north from the tropics cools and sinks before it moves back towards the equator. Climate models suggest that the rate of this formation of deep water will decrease by the end of the century3. That is problematic not only because deep-water formation drives the ocean circulation, but also because it carries vast amounts of carbon dioxide to the depths, sequestering it from the atmosphere.

“We need to find out how water masses at high latitudes are tied to the larger Atlantic circulation,” says Susan Lozier, a physical oceanographer at Duke University in Durham, North Carolina. “That is not only of interest to oceano­graphers. The ocean moves such huge amounts of heat and carbon around that most everyone should care.”

To understand how deep-water formation works, and why it varies, Lozier and her colleagues have proposed setting up an array of moored instruments and autonomous gliders called the Overturning in the Subpolar North Atlantic Program (OSNAP). This consists of two legs: a western line extending from southern Labrador to the southwest tip of Greenland, and an eastern line from Greenland to Scotland (see ‘Ebb and flow’). If the US National Science Foundation and the UK Natural Environment Research Council approve the US$24-million project, measurements of heat and currents in the deep-water-formation region could start in July 2014. They are expected to give their decision later this month. If the array goes ahead, Canada, Germany and the Netherlands have all promised to contribute instruments to it.

Scientists are also trying to trace the cold, deep water as it flows into the turbulent South Atlantic, which also receives an influx of warm surface water from the Indian Ocean. South Africa, Brazil, France, Argentina and the United States are all contributing to a monitoring array that is being built at 34.5° south, between South Africa and Argentina, as part of the US$5-million South Atlantic Meridional Overturning Circulation (SAMOC) programme.

By the end of the year, if all goes well, a network of bottom-moored instruments will begin to record water temperature and salinity at different levels in the deep, cold currents that run along the edges of the ocean basin. By combining those data with acoustic measure­ments of current velocity and bottom pressure, and with temperature and salinity data recorded by freely drifting profiling floats in the open ocean, scientists should be able to calculate the strength of the overturning circulation at that latitude, says Silvia Garzoli, chief scientist at the Atlantic Oceanographic and Meteorological Laboratory in Miami, Florida, and a member of the project’s executive committee.

Most scientists regard the idea that global warming will trigger a collapse of ocean circulation — the apocalyptic scenario that inspired the 2004 action film The Day After Tomorrow — to be exceedingly unlikely. But Bryden says that the 2009 Atlantic circulation glitch is an indication of just how surprising ocean behaviour can be. “The next one,” he says, “may be twice as big.”