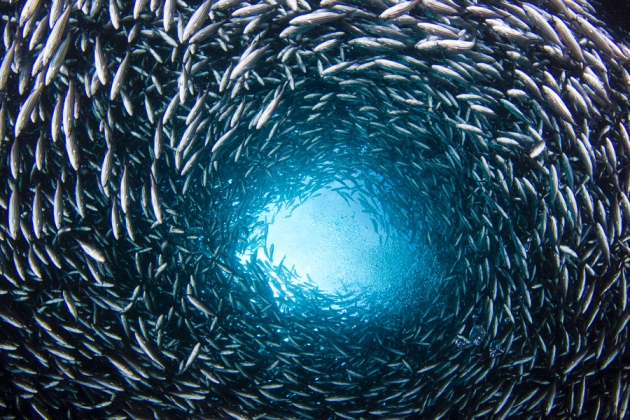 The ocean's riches: a school of brown-striped snapper (Xenocys jessiae), pictured near the Galapagos Islands.

Ove Hoegh-Guldberg is one of Australia’s leading marine scientists and director of the University of Queensland’s Global Change Institute in St Lucia. He is also the lead author of Reviving the Ocean Economy, a report published on 23 April by the conservation group WWF, which attempts to estimate the value of the ocean and proposes steps for its safeguarding.

There have been several reports about the state of the ocean — why is this one different?

It looks at the ocean as one system, which has not been the case in previous efforts. In the past we have missed that opportunity to look at the interactions between local and global factors, between fishing and ocean chemistry and so on.

“If the ocean were a country it would be the seventh-largest economy on the planet.”

The second part of this is to try and put a value on that. That is ambitious. No one has really tried to do that. One of the reasons why is people thought we can’t evaluate everything. How do you put a value on the climate regulatory activities of the ocean? And so the answer is: this is the minimum number. Despite that it’s quite large.

The report says that ocean assets such as fisheries, shipping lanes and tourism are worth US$24 trillion and produce an annual value of $2.5 trillion from their outputs. How reliable is that figure?

Being a natural scientist, I’m suspicious of economists. But when you look at different numbers … this is not too far off what other people have found in terms of components of the total value. I’ve been involved in collaborations in the past with government, and you really do need defendable numbers.

[The report] comes up with a very large number despite the fact that we can’t value the many intangibles — production of sand along coastlines, the value of oceans in terms of their contribution to cultures, and so on. We don’t make any apologies for the fact that we can’t get the real value. But we can get a number which we know is the minimum, and in this case it is a very large number. If the ocean were a country it would be the seventh-largest economy on the planet. I don’t think that is surprising to any marine scientist, but it may come as a surprise to a lot of people outside marine science..

I think it’s about communicating with different audiences. When you think about it, the ocean is like an asset. People get that. People have bank balances. Corporations have their spreadsheets. It’s not a big change in direction. It is trying to get that dialogue going in terms that the wider community will understand.

The eight proposed actions in the report include committing to ocean targets in the UN sustainable development goals, agreement on avoiding damage from climate change, and a new alliance of maritime states. These are complex international efforts. How do you rate their chances of success?

The eight actions are achievable. We’ve already had a big push at the international level to establish sustainable development goals focused on the ocean. It is this sort of concerted action that this report is calling for, where we have all players on deck, where we’re not trying to blame one group over another but are really bringing together the international community to do this.

It does come down to these eight steps. If we push the right resources in, we can undo a lot of the damage and avoid the worst trajectory that we seem to be on right now.