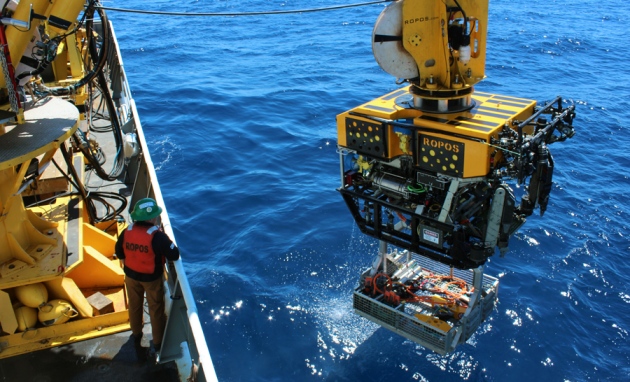 Engineers deploy a submersible as part of the Ocean Observatories Initiative, which is set to finish in May 2015.

From the waters off western North America to the seas surrounding Greenland, US oceanographers have nearly finished deploying hundreds of sensors, moorings, gliders and other equipment that make up an ambitious US$386-million effort to establish the world’s biggest interactive portal to the oceans. Through the Ocean Observatories Initiative (OOI), set for completion by May 2015, anyone could watch the climate changing in the North Pacific or an underwater volcano erupting in real time.

But even as the final instruments splash into the sea, the project has hit a snag. After spending $37 million to develop state-of-the-art software to manage live data, the OOI has terminated that contract — shifting responsibility for ‘cyberinfrastructure’ from the University of California, San Diego (UCSD), to a group based at Rutgers University in New Brunswick, New Jersey.

The shift is meant to help the OOI finish construction on time and on budget by next spring, and is likely to delay the start of data streaming by only a few months. Still, it is making some oceanographers anxious, given the project’s broad scope. Data from its observatories are likely to dominate US oceanography for the next 25 years — the OOI’s planned lifetime.

The project, funded by the US National Science Foundation, is intended to be for the oceans what earthquake and volcano monitors are for the land: a way to allow real-time glimpses into the currents, marine life and chemistry in the deep sea. It will scrutinize a few select patches of ocean in exhaustive detail, using instruments attached to cables and on free-sailing gliders to measure temperature, salinity, chemistry and other key oceanographic parameters. The network’s scattered locations include a cabled sea-floor observatory off the coast of Oregon; sets of instrumented moorings off the US east and west coasts; and four high-latitude sites (see ‘Wired waters’). 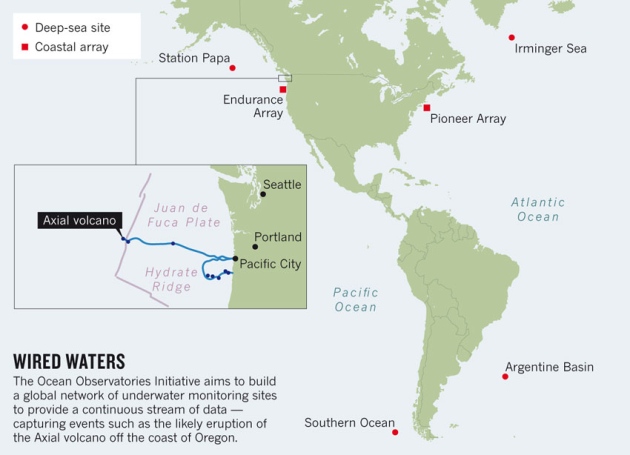 As Nature went to press, a few spreadsheets’ worth of data gathered over the summer from the coastal sites was all that was publicly available. Live data from the entire system will start rolling out slowly over the next couple of months, says Tim Cowles, who oversees project construction for the Consortium for Ocean Leadership in Washington DC, which is overseeing the OOI.

Originally, the data were to flow into a sophisticated command-and-control system where, for instance, oceanographers could order a glider to quickly change its course. John Orcutt, head of the UCSD project, says that his team had built this command interface and that it was delivering data reliably.

But Cowles says that the project had been slipping further and further behind schedule, and so the decision was made to terminate the UCSD contract. In the early morning of 1 November, Orcutt’s team shut down its connections with OOI equipment and began packing up computer servers to ship to Rutgers.

Cowles acknowledges that the Rutgers software is likely to be more basic than the UCSD system; it might, for instance, have less ability to control equipment in the water. “Somebody’s going to say ‘I really wanted a Ferrari and you only delivered a BMW’,” he says. “But the key user functionality will be there.”

Finishing the data-management system could be a race against time, at least for a key OOI site off the Oregon coast. There, the underwater volcano Axial is building up to an eruption. This summer, in a marathon effort, a team led by scientists from the University of Washington finished installing all the instruments at Axial — including seismometers, web cameras, and others — for the sea-floor cabled observatory. “It’s in the water, and it works,” says John Delaney, an oceanographer at the University of Washington in Seattle who designed the observatory. “I’m very, very excited about that.” But data from the OOI cable are not yet available to the broader scientific community.

The timing is urgent: Axial last erupted in 2011, and magma is now refilling the sea floor beneath the volcano so quickly that some geologists predict that it will erupt within a year. As they wait for the OOI software, Delaney and others are working to arrange access through a data centre at the Incorporated Research Institutions for Seismology in Washington DC. “I want the data in the hands of the community,” says Delaney. “That’s what it was all about to begin with.”

In addition to the unfinished data pipeline, two major parts of the OOI have yet to go into the water. In February and March 2015, oceanographers aboard the research vessel Atlantis will deploy moored sensor arrays off the coasts of Chile and Argentina — the network’s final sites.

The OOI will be formally commissioned in mid-May, which is the ultimate deadline for all the data to be publicly available. Science workshops on using the data will take place starting early next year, Cowles wrote in a 24 November web update.

“If there are expectations that were developed six years ago by members of the community, maybe that wish won’t necessarily come true based on their earliest dream,” says Cowles. “Nonetheless, the built reality of the OOI will be remarkable, and unlike any functionality we in ocean science have had before.”

The picture caption in this story originally gave March 2015 instead of May 2015 as the date when the installation of the Ocean Observatories Initiative network is set to finish. This has now been corrected.