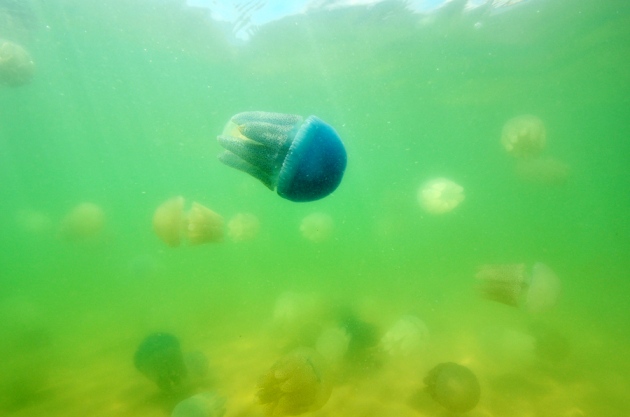 The global risk posed by jellyfish blooms and other afflictions of the oceans is often overplayed, a team of researchers claims.

The state of the world's seas is often painted as verging on catastrophe. But although some challenges are very real, others have been vastly overstated, researchers claim in a review paper. The team writes that scientists, journals and the media have fallen into a mode of groupthink that can damage the credibility of the ocean sciences. The controversial study exposes fault lines in the marine-science community.

Carlos Duarte, a marine biologist at the University of Western Australia in Perth, and his colleagues say that gloomy media reports about ocean issues such as invasive species and coral die-offs are not always based on actual observations. It is not just journalists who are to blame, they maintain: the marine research community “may not have remained sufficiently sceptical” on the topic.

“There are a lot of conversations around meetings about the excess doom and gloom in our reporting of ocean health, but perhaps this is the first paper to bring these concerns out of the privacy of peer conversations,” says Duarte. “This is a silent movement, as there is a lot of peer pressure against voicing those concerns openly, so my co-authors and I expect significant heat upon us to be derived from our paper.”

In their review, published on 31 December in BioScience1, Duarte and his colleagues look at purported catastrophes, including overfishing, jellyfish blooms, invasive species and the impact of ocean acidification on organisms such as corals. In some cases, they say, there is strong evidence for global-scale problems bringing severe disruption — overfishing is a prime example. But for other topics that have excited scientific and media attention, the evidence is equivocal or weak. In these categories, Duarte places global blooms of jellyfish and the problems caused by invasive species.

Duarte's team reviews a number of news reports and scientific papers. It contrasts these with other papers that would seem to undermine the catastrophe narrative.

Among the "excessive media headlines" cited are the CNN's 'Overfished and under-protected: Oceans on the brink of catastrophic collapse'. Duarte also told Nature that its own news story 'Coastal havoc boosts jellies' fell into the 'doom and gloom' trap.

Another example is the decline of species that build calciferous shells, attributed to ocean acidification caused by carbon dioxide dissolving in the seas. In 2013, The Seattle Times said that this issue "is helping push the seas toward a great unraveling that threatens to scramble marine life on a scale almost too big to fathom".

But the authors of the BioScience paper say that there are significant uncertainties in this. Many experiments are based on “worst-case scenarios”, they say, and claims that calciferous organisms are already declining may relate not to carbon emissions, but to other oceanic processes.

And although it is sometimes claimed that jellyfish blooms are increasing around the world, Duarte's paper says there were no global attempts to quantify the increase until 2012, so such claims are extrapolated from a small number of cases.

Overselling such claims is dangerous, says the group, because the public may become inured to them and give up trying to save an ocean that it believes is already beyond redemption.

Duarte is now looking to bring together a group of like-minded researchers to ‘audit’ claims of ocean disasters by critically assessing the evidence. This would weed out claims based on poor evidence, he says, and bring society some hope that the oceans can be saved.

As well as pointing the finger at scientists and journalists, Duarte’s group places some of the blame for the hype at the door of some journals, including Nature. “The appetite of the media for particular headlines can influence the contents of top scientific journals,” they write. (Note: Nature’s news and comment team is editorially independent of its research editorial team.)

Philip Campbell, Nature's editor-in-chief, disagrees. “We select research for publication in Nature on the basis of scientific significance,” he says. “That in turn may lead to citation impact and media coverage, but Nature editors aren't driven by those considerations, and couldn’t predict them even if they wished to do so.”

“There are major problems facing the planet, and that can’t be overstated,” says Benjamin Halpern, a marine researcher at the University of California, Santa Barbara. “What can be overstated is what’s going to happen in the short term in a particular place. Their broad point that some of this stuff is overstated is accurate — to a point,” he says, noting that he has presented more-positive messages, including in Nature2.

Other researchers are even less sympathetic to Duarte's thesis. One is atmospheric physicist Ralph Keeling of the Scripps Institution of Oceanography in La Jolla, California, whose work is criticized in the paper. In 2010, Keeling and his co-authors suggested that in the future the problem of low oxygen levels in water, now seen in 'dead zones' off many coasts, could spread on a global scale3. Duarte and his team do not present evidence to the contrary, but they suggest that it is wrong to call this a 'calamity'.

But Keeling, who leads programmes on atmospheric carbon dioxide and oxygen, says that his paper did not use the term calamity. Instead, it called the issue “a potentially serious consequence of global warming”.

Duarte's paper “is kind of committing the same sin it’s railing against in the casting of this as a series of calamities”, says Keeling. “The literature doesn’t call it calamites. That’s their own hyperbolic language.”