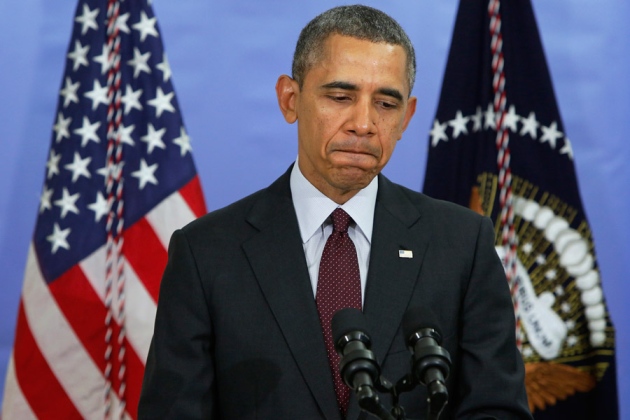 What a difference a year makes. In April 2013, US President Barack Obama unveiled a budget proposal that set out plans to map the human brain and to capture an asteroid that could be towed near to the Moon for astronauts to study. But that sense of ambition is absent from Obama’s plan for fiscal year 2015, which was released on 4 March, frustrating scientists and policy analysts who hoped for a show of support from the White House after years of pressure to reduce government spending.

The US$3.9-trillion proposal would keep budgets flat or nearly so at major science agencies, including the National Institutes of Health (NIH), the National Science Foundation (NSF) and NASA. Overall, it includes just $65.9 billion for non-defence research and development, a paltry 0.7% above the current level.

The proposal seeks an extra $5.3-billion boost for science from a new initiative that is separate from normal agency budgets, to be paid for in large part by new taxes on the wealthy. But few observers expect Congress to accept that plan, dimming hopes for a significant boost for science funding in 2015. “We have to convince the legislators that they have to make some tough decisions and give more money to science,” says Samuel Rankin, director of the American Mathematical Society’s Washington DC office. “That’s easier said than done.”

At the NIH, Obama is seeking $30.2 billion in 2015, compared with this year’s $30 billion (see ‘Budget highlights’) — a rise of less than 1%. That is not enough to outpace the expected rise in research costs in 2015, which according to the agency’s own Biomedical Research and Development Price Index will be 2.2%, higher than the US inflation rate. One of the few bright spots in the NIH plan is continued support for the Brain Research through Advancing Innovative Neurotechnologies Initiative. It would receive $100 million in 2015, up from $40 million this year.

“Scientists are constitutionally not comfortable with the status quo, and that’s what this is — not only the money but the idea,” says Howard Garrison, deputy executive director for policy at the Federation of American Societies for Experimental Biology in Washington DC. Stefano Bertuzzi, executive director of the American Society of Cell Biology in Bethesda, Maryland, is blunter. “A 1% bump is not going to cut it,” he says.

The NSF would see its budget creep up to $7.3 billion, roughly 1% above the current level. Of the agency’s seven research directorates, only Social, Behavioural and Economic Sciences (SBE) would receive a noticeable boost, rising by 6% to $272 million. Most of that is earmarked for the National Center for Science and Engineering Statistics (NCSES), which tracks trends in scientific research, education and workforce development. Rick Wilson, a political scientist at Rice University in Houston, Texas, would have liked to see more SBE money made available to individual researchers, but says that the NCSES data are “really useful” for social scientists.

At NASA, the proposed $17.5-billion total budget pushes forward the administration’s plans to capture and study an asteroid, despite lawmakers’ scepticism about the mission’s value. Asteroid experts at NASA’s Jet Propulsion Laboratory in Pasadena, California, have been hunting for candidate targets, while astronauts at the Johnson Space Center in Houston, Texas, are designing equipment for a close-up encounter with a space rock. NASA has asked for $133 million — an increase of $55 million over this year — for the programme, which NASA chief Charles Bolden has described as a way to test new exploration capabilities aimed at eventually sending astronauts to Mars. If Congress approves the budget proposal, the agency will select the basic outlines of the mission plan early next year.

Obama’s budget request also includes $15 million for a spacecraft to Europa, an icy moon of Jupiter. The move is an apparent nod to Congress, which last year inserted $80 million into the NASA budget explicitly for Europa, despite the administration’s objections. At times, NASA has sounded less than enthusiastic about this moon; Beth Robinson, the agency’s chief financial officer, told reporters last week that Europa was a challenging environment and that she did not foresee a mission to the moon launching before the mid-2020s.

Overall, NASA’s science budget would drop nearly 3.5% under the president’s proposal, to $4.97 billion. The biggest casualty would be the Stratospheric Observatory for Infrared Astronomy, a joint US–German project involving a 2.5-metre airborne telescope. NASA says that if other partners cannot supply most of the plane’s operating budget, it will ground the observatory from 1 October (see Nature http://doi.org/rtk; 2014).

Also facing a cut is high-energy physics research at the Department of Energy (DOE), which would fall by 6.8% to $744 million. That has sparked concerns that the US physics community has been too slow to unite behind a viable research agenda. With unfortunate timing, a DOE advisory panel charged with producing such an agenda is scheduled to release its results two months from now. Under consideration are proposals for a new domestic neutrino experiment and US participation in a linear collider, likely to be destined for Japan, that would build on advances at the Large Hadron Collider in Geneva, Switzerland.

“The White House is certainly sending a signal to the high-energy physics community that it needs to get its act together,” says Michael Lubell, director of public affairs for the American Physical Society in College Park, Maryland.

To Andrew Lankford, a physicist at the University of California, Irvine, who leads the DOE’s High Energy Physics Advisory Panel, the move is not surprising, given Obama’s emphasis on climate and clean-energy research and development at the department — these saw a significant boost in the White House budget proposal. Lankford says that the proposal would make it “a challenge to maintain the vitality of our research community” — but he is confident that his panel’s report will be completed in time to influence budget negotiations in Congress.