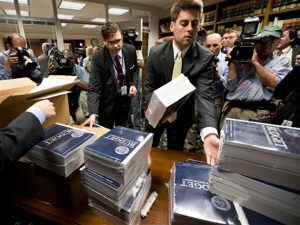 US President Barack Obama released a budget plan on 10 April for fiscal year 2014 that proposes US$143 billion for research and development across the federal government, an increase of about 1% above 2012 levels.

But even this modest rise may be wishful thinking. White House budget requests often bear little resemblance to the spending choices made later by Congress, although they can reveal an administration’s policy priorities.

More importantly, though, the president’s budget request does not take into account the effects of the across-the-board spending cuts known as 'sequestration', says Matt Hourihan, who directs the research and development budget and policy programme at the American Association for the Advancement of Science in Washington DC.

Sequestration has reduced science agencies’ accounts by about 5% since it took effect on 1 March. Next year it is set to claim even more cash, as Congress is mandated by law to shrink the federal government’s discretionary spending by a further $91 billion below 2013 levels, to $967 billion.Yet Obama’s proposal is $97 billion above current levels. “You’ve got a budget that doesn’t fit into the fiscal hole it’s supposed to fill,” Hourihan says.

Some agencies, such as the National Oceanic and Atmospheric Administration (NOAA), have coped with the first round of cuts by instituting temporary hiring freezes. The National Science Foundation (NSF) has said it will probably reduce the number of grants it awards this year by about 1,000. Other agencies, including the Environmental Protection Agency (EPA), have proposed cutting their payrolls by instituting mandatory furlough days.

The president’s chief science adviser, John Holdren, acknowledged that gloomy fiscal reality at a briefing today. “This is not the budget we would want if financial times were better,” he says.

Some observers of Congress say they are hopeful that those automatic cuts could spur lawmakers to approve 2014 budgets for federal agencies before the next fiscal year begins — something that has happened only rarely in recent years. Instead, lawmakers have chosen to fund government operations by passing stop-gap spending bills for long stretches of time. But Norman Ornstein, a political scientist and resident scholar at the American Enterprise Institute in Washington DC says that members of Congress are going to begin to get feedback from constituents as the sequester begins to bite. “That will, I think, provide a real impetus for people to go to the negotiating table.”

Here is a look at how the 2014 budget request would affect key science agencies.

At the US National Institutes of Health (NIH) in Bethesda, Maryland, Obama requested $31.2 billion, which represents a small $274 million increase on 2013 funding. Health and Human Services Secretary Kathleen Sebelius nonetheless called the NIH figure “significant” and said that it reflected the administration’s commitment to medical science.

Agency watchers were more subdued. “It’s better than it could be but I’m not sure anyone is prepared to throw a parade,” says David Moore, the senior director of government relations at the Association of American Medical Colleges in Washington DC.

Jennifer Zeitzer, the director of legislative affairs at the Federation of American Societies for Experimental Biology in Bethesda, Maryland, says that her group was pleased that the NIH seeks to boost the number of new grants to 10,269 in 2014. That represents a 7% increase over the number of grants the agency planned to fund in 2013 before the sequester hit.

Only a few pet projects received new money. The NIH budget asks for $40 million to put towards a brain-mapping project that Obama recently announced (see “Behind the scenes of a brain-mapping moon shot”). The budget also requests $80 million for new research into Alzheimer’s disease aimed at speeding drug development and testing.

The budget request was a lot kinder to the NSF. It would receive a $550 million boost over its de facto 2013 funding, increasing its funding to $7.625 billion dollars. “Overall, it’s spectacular,” says Joel Widder, a former NSF deputy director for public and legislative affairs who is now a partner at the Oldaker Law Group in Washington DC, which advocates for universities and research organizations. The boost may reflect an effort to honour the White House’s commitment to science and technology, he says.

As a result, the main research divisions at NSF all saw budget increases. The engineering division, for example, would receive boost of 9.8%. The newly crafted International and Integrative Activities division was another clear winner. It would receive around a 34.3% boost to fund foundation-wide programmes including graduate research fellowships, international programmes and interdisciplinary programmes. The foundation’s fund for major capital projects would begin to deliver construction money to the Large Synoptic Survey Telescope, an 8.4-metre telescope in Chile that would scan the sky for near-Earth asteroids.

The Department of Energy also fares well under Obama’s budget plan. The agency’s budget would rise 6.5% from 2013 levels to $28.4 billion. The budget for energy efficiency, clean energy and advanced manufacturing technologies would jump by $955 million to nearly $2.8 billion. The largest increases fall within the vehicle technologies programme ($235 million increase) and advanced manufacturing programme ($219 million increase), although funding for weatherization programmes, building technologies and wind energy would go up as well. Fossil-fuel research and development would decline by $74 million to $421 million, but it still would support $173 million for carbon capture and storage technologies. Funding for nuclear energy development would decrease by around 4.7% to $735 million.

At the agency’s Office of Science, around a third of the new funds would be routed to the growing Basic Energy Sciences (BES) account. BES has increasingly prioritized ‘use-inspired’ basic research, which veers closer to applied research than, for example, the office’s High Energy Physics (HEP) account. HEP suffered a cut in this year’s budget request, on top of a controversial cut in last year’s as well.

Within BES, prominent beneficiaries would be the Energy Frontier Research Centers (EFRC), 46 multidisciplinary teams, first started with 2009 stimulus funds, that are now studying specific energy problems, such as how to separate hydrocarbon gases more efficiently or how to make fuel cells last longer. The EFRCs that are ending would be replaced with new ones, and several would benefit from unusually generous forward-funding for five years under the proposed budget. “BES has successfully launched new programmes and that’s making its budget look like it’s going up,” says John Hemminger, the chairman of the BES advisory committee and a chemist at the University of California, Irvine.

Near-Earth asteroids took the spotlight in this year’s NASA budget request. The agency would double the $20 million spent in 2012 on hunting dangerous space rocks. The aim is to identify a candidate for an asteroid capture mission, in which a robotic spacecraft would fly to and grapple a small asteroid, some 7 to 10 metres across, then tow it and park it near the Moon. Astronauts aboard the Orion crew vehicle could then visit and study the rock as early as 2021. “This mission raises the bar for human exploration,” says NASA administrator, Charles Bolden. The agency is asking for $78 million in 2014 to begin mission development.

Elsewhere within the $5-billion science division, the Mars programme would push along the recent surprise announcement of a rover to launch in 2020. Mission concepts for a new probe to Jupiter's moon Europa would stall. The James Webb Space Telescope — an infrared successor to the Hubble Space Telescope — would stay on track for a 2018 launch. In Earth sciences, NASA would take over some responsibilities from other agencies. It would develop future Landsat remote-sensing missions in place of the US Geological Survey, and it would fund climate sensors for future polar-orbiting satellites in place of NOAA.

The latter move follows a recommendation made last year by an advisory panel examining the status of NOAA’s Joint Polar Satellite System (JPSS), a programme designed to supply much of the data for the agency’s weather forecasts.

Budget shortfalls and organizational problems have delayed the launch of the first JPSS satellite, making it likely that there will be a lengthy gap in polar-orbiting satellite coverage once the pilot probe now in orbit reaches the end of its design life in late 2016. And officials have warned that there is a possibility of a second gap if there is any delay in the launch of the second JPSS probe. Shifting responsibility for the programme’s climate sensors to NASA will help NOAA move up the launch date for this second probe from 2022 to 2021, says acting NOAA administrator Kathryn Sullivan.

Funding for EPA falls by 3.5% to $8.2 billion in the budget proposal, the fourth consecutive year that the agency has faced budget cuts. Research funding at the agency would be cut by $13.4 million from the $568 million that was available in the 2012 enacted budget.

A stated priority for the EPA is tackling climate change, and the budget calls for $177 million to be spent towards reducing greenhouse gases. The lion’s share of that funding would go to programmes such as ENERGY STAR, a testing and labelling programme designed to encourage more energy-efficient household products, and the Global Methane Initiative, an international partnership to reduce methane emissions. But cuts include a $24-million drop from 2012 funding ifor a programme to reduce emissions from diesel engines. “The budget basically guts the EPA’s diesel clean-up programme for existing engines,” says Frank O’Donnell, president of Clean Air Watch, a non-profit environmental group in Washington DC.