Junior researchers are being squeezed out of Japanese universities by government policies aimed at cutting costs. The claim, from the Council for Science and Technology Policy (CSTP), the government’s top advisory body on science, is raising concerns that the country’s next generation of scientific leaders is under threat and that the trend may already be harming research productivity.

The CSTP analysis comes from a draft report on Japan's science and technology activities scheduled for publication in the next several weeks. It points out that although the number of tenured and contract faculty at publicly funded universities has grown from around 50,000 to 63,000 over the past 30 years, the number of faculty under 35 has plunged from more than 10,000 to 6,800 (see ‘Going grey’). 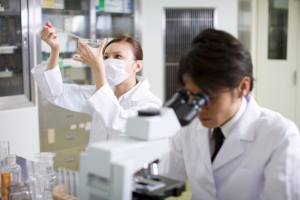 Part of the problem is demographic: people who were born during the ‘baby boom’ after the Second World War now occupy the senior echelons of universities — a situation that is reducing opportunities for younger researchers in other countries as well (see Nature 483, 233–235; 2012).

But changes in government policy over the past two decades have made the situation in Japan much more severe, says Hideki Hirota, an official at the CSTP and author of the report. During the 1990s, the government encouraged universities to expand their graduate schools, hiring more faculty and staff and churning out more PhDs. But by 2001, the government had begun to force national organizations, including universities, to trim the number of full-time staff every year. As a consequence, a glut of graduates found that universities were hiring far fewer young researchers.

“Universities have been given limited discretion to plan a long-term personnel strategy of their own," Hirota says.“It may not be avoidable to cut costs amid the sluggish economy, but they should be at least allowed to decide how to use their funding.” 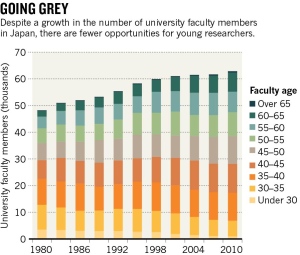 Large, research-oriented institutions, such as Tohoku University in Sendai and Nagoya University, have been able to draw on funding from competitive grants and revenues from affiliated hospitals to slow the decline in numbers of younger staff researchers. But smaller institutions have been hit harder: a dozen universities specializing in science and engineering, such as the Toyohashi University of Technology in Aichi, saw the number of faculty under 35 fall by an average of 23% between 2004 and 2010.

And relying on competitive funding is not a long-term solution, says Masafumi Maeda, executive vice-president of the University of Tokyo. “Although competitive funding allows more hiring of young researchers and enhances their mobility and career building, many projects are time limited and don't lead to continuous employment," he says.

Cutbacks in management grants and the extension of the mandatory retirement age to 65 at some institutions have also exacerbated the problem, says Makoto Kitano, an official in charge of supporting national universities at the science and education ministry. As part of its efforts to support young scientists, the ministry last year established a tenure-track programme for outstanding young researchers.

Shinichi Kobayashi, a specialist in science and technology workforce issues at the Research Center for University Studies at the University of Tsukuba, believes that the shortage of younger faculty may be partially responsible for a drop in Japan’s scientific productivity. According to Elsevier’s SciVerse Scopus database, the number of papers published by Japanese universities, companies and organizations slid by 4.3% between 2006 and 2010, to 112,000. Over the same time period, the UK tally rose by 12.7% to 124,000, and Germany’s climbed by 15% to 118,000.

Kobayashi suggests that one solution would be to increase funding for basic research and distribute it more broadly, especially among smaller universities, to give young scientists more opportunities. Although he acknowledges that there is no quick fix, he says that the government has ignored the growing problem for too long. “Japan needs to tackle it immediately.”