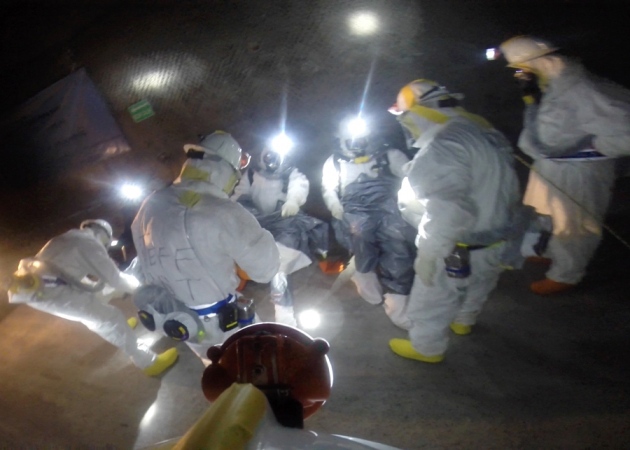 Recovery teams at a New Mexico nuclear-waste facility during a trip into the underground storage halls in April to assess damage from what later turned out to be a ruptured drum.

Time bombs may be ticking at the United States’ only deep geological repository for nuclear waste. US authorities concluded last week that at least 368 drums of waste at the site could be susceptible to the chemical reaction suspected to have caused a drum to rupture there in February. That accident caused radioactive material to spill into the repository and leak into the environment above ground.

The Waste Isolation Pilot Plant (WIPP) near Carlsbad, New Mexico, is mined out of a salt bed 655 metres underground, and stores low- and medium-level military nuclear waste, containing long-lived, man-made radioactive elements such as plutonium and americium. The suspect drums contain nitrates and cellulose, which are thought to have reacted to cause the explosion in February, and are located in two of the repository’s eight vast storage rooms — 313 in panel 6, which has already been filled, and 55 in the partly filled panel 7, where the February accident occurred.

To mitigate the threat of further exploding drums, the New Mexico Environment Department (NMED) in Santa Fe issued an order on 20 May giving the US Department of Energy (DOE) and the Nuclear Waste Partnership — the contractor that operates the WIPP site — until 30 May to come up with a plan to “expedite” the sealing of panel 6 and part of panel 7. It is not yet clear when the panels will be sealed, as that will depend on how long it takes to ensure that the sealing is done safely, says Jim Winchester, a spokesman for the NMED. 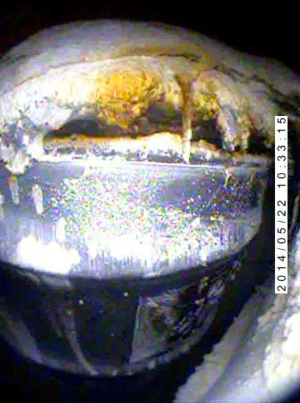 An explosive chemical reaction inside this drum, photographed on 22 May, was probably what caused it to become unsealed and to release radioactivity.

The order was issued after an inspection team found evidence on 16 May of heat and physical damage to a waste drum in panel 7. The drum was one of a batch from the Los Alamos National Laboratory (LANL) in New Mexico that contained a mix of nitrate salts — generated, for example, in the recovery of plutonium from metal and other scrap during waste processing — and cellulose in the form of a wheat-based commercial cat litter used to absorb liquid waste.

The DOE believes a reaction between the nitrates and cellulose blew the lid off of the container. But this explanation has yet to be proven, Winchester cautions. “It is not yet known how, or if, the reaction created the rupture in the drum(s),” he says.

The LANL last year switched the processing of some of its waste to the wheat-based litter from an inorganic, clay-based absorbent. Winchester says that such changes need to first be assessed for safety, but the NMED was not informed of the change and so did not approve it. The WIPP has come under fire since the accident for progressively watering down safety standards and allowing a lax security culture to develop (see 'Call for better oversight of nuclear-waste storage').

In addition to the drums at the WIPP, another 57 containing the suspect mix are still in temporary storage at the LANL. On 19 May, the NMED told the DOE and the LANL that they had two days to present a plan to secure the drums. In their response on 21 May, the LANL and the DOE said that the drums were being transferred to a tent fitted with fire-control and high-efficiency particulate air filtration to contain any radioactive particles in the event of an accident. They added that air radiation levels and the temperature of the drums were being monitored, and that the drums were being inspected hourly for signs of rupture.

The WIPP has been closed since the February accident and will reopen only “when it is safe to do so”, according to a 22 May statement from the DOE. The accident is still under investigation, and parts of the underground repository are still contaminated with radioactivity. The DOE added that current assumptions and precautions about the hazards of operating the WIPP are being “evaluated and revised”.