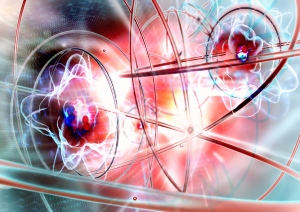 Electrons in atoms behave like waves, and when researchers excite them to higher orbits, those waves can split up, revealing the constituent characteristics of the electron.

In a feat of technical mastery, condensed-matter physicists have managed to detect the elusive third constituent of an electron — its 'orbiton'. The achievement could help to resolve a long-standing mystery about the origin of high-temperature superconductivity, and aid in the construction of quantum computers.

Isolated electrons cannot be split into smaller components, earning them the designation of a fundamental particle. But in the 1980s, physicists predicted that electrons in a one-dimensional chain of atoms could be split into three quasiparticles: a ‘holon’ carrying the electron’s charge, a ‘spinon’ carrying its spin (an intrinsic quantum property related to magnetism) and an ‘orbiton’ carrying its orbital location1.

“These quasiparticles can move with different speeds and even in different directions in the material,” says Jeroen van den Brink, a condensed-matter physicist at the Institute for Theoretical Solid State Physics in Dresden, Germany. Atomic electrons have this ability because they behave like waves when confined within a material. “When excited, that wave splits into multiple waves, each carrying different characteristics of the electron; but they cannot exist independently outside the material,” he explains.

In 1996, physicists split an electron into a holon and spinon2. Now, van den Brink and his colleagues have broken an electron into an orbiton and a spinon, as reported in Nature today3. The team created the quasiparticles by firing a beam of X-ray photons at a single electron in a one-dimensional sample of strontium cuprate. The beam excited the electron to a higher orbital, causing the beam to lose a fraction of its energy in the process, then rebounded. The team measured the number of scattered photons in the rebounding beam, along with their energy and momentum, and compared this with computer simulations of the beam's properties. The researchers found that when the photons' energy loss was between about 1.5 and 3.5 electronvolts, the beam's spectrum matched their predictions for the case in which an orbiton and spinon had been created and were moving in opposite directions through the material.

“The next step will be to produce the holon, the spinon and the orbiton at the same time,” says van den Brink.

Andrew Boothroyd, a physicist at the University of Oxford, UK, commends the team’s technological prowess. “To detect this, they picked out a shift in the beam energy of about one part in a million, which is very difficult,” he says.

Studying orbitons in more depth could help to solve a decades-long mystery about how some materials, in particular the iron pnictides, are able to superconduct — or allow electricity to flow without resistance — at high temperatures, adds Jan Zaanen, a condensed-matter physicist at the University of Leiden in the Netherlands. Physicists have suggested that this process could be explained by the motion of orbitons4. “Personally, I am sceptical about this explanation, but now there is a way to test it by looking at how the orbitons move,” Zaanen says.

Orbitons could also aid the quest to build a quantum computer — which would use the quantum properties of particles to perform calculations more quickly than its classical counterpart. “That seems be the direction this will go in the future — encoding and manipulating information in both spinons and orbitons,” says Boothroyd. A major stumbling block for quantum computing has been that quantum effects are typically destroyed before calculations can be performed. “The advantage here is that orbital transitions are extremely fast, taking just femtoseconds,” he says. “That’s so fast that it may create a better chance for making a realistic quantum computer.”