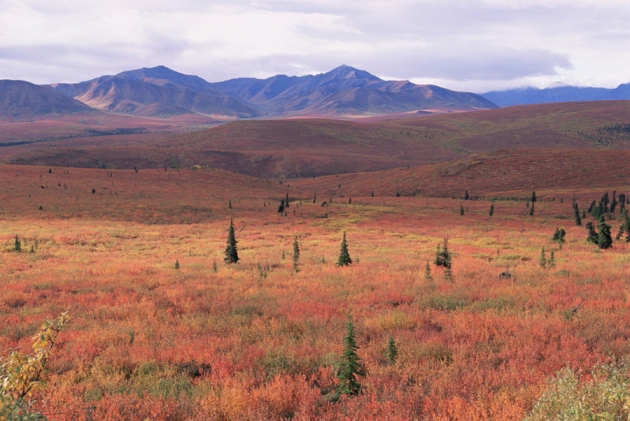 Ecosystem productivity is rising at high latitudes, such as this tundra dotted with trees in Denali National Park, Alaska.

Northern forests are not just surviving but thriving, despite concerns about droughts, wildfires and bark beetles surging as the world warms.

Ecosystem productivity is rising at high latitudes, with a roughly 50% increase in the amount of carbon cycling through northern landscapes since the 1950s, according to an analysis of atmospheric carbon dioxide trends published today in Science1. Boreal forests in particular have shown marked increases in carbon uptake during summer.

“Something quite massive is taking place on large parts of the landscape that are not directly impacted by humans,” says study co-author Ralph Keeling, a geochemist at the Scripps Institution of Oceanography in La Jolla, California, who runs a CO2-monitoring programme at Hawaii’s Mauna Loa Observatory.

The research examines large seasonal swings in atmospheric CO2 levels in the Northern Hemisphere, which is home to the bulk of Earth’s land. Each spring, dormant plants awaken and begin taking in CO2 to fuel photosynthesis. The pendulum reverses in autumn, when the release of CO2 increases as leaves fall and photosynthesis gives way to respiration by plants and microbes.

Researchers compared detailed aerial measurements of atmospheric CO2 levels taken in 2009–11 with data from an aerial survey conducted in 1958–61 and observations from Mauna Loa and a second long-term monitoring site in Barrow, Alaska.

The results suggest that the amplitude of the annual CO2 swing has increased over time and continues to rise today, despite growing concerns about the vulnerability of northern forests to pests and fires. “Everybody hears about negative feedbacks on the carbon cycle, but this study shows that the activity of the biosphere is increasing in spite of climate change,” says Philippe Ciais, a carbon-cycle researcher at the Laboratory of Climate and Environmental Sciences in Gif-sur-Yvette, France, who was not involved in the research.

The study backs up earlier research that came to similar conclusions in the mid-1990s from a comparison of data from Mauna Loa and Barrow2. Those results have gradually faded from memory. Keeling says that one reason for this was a nagging question about what kind of conclusions could be drawn from the Barrow data, which are collected at sea level rather than at a higher altitude where atmospheric currents are well mixed. Subsequent research also suggested that the strength of the CO2 pulse was in fact declining at Mauna Loa3. Both Ciais and Keeling say the new study resolves those questions while confirming that ecosystem productivity has continued to rise in the north.

The researchers used models to analyse the carbon cycle and atmospheric circulation, and to determine what was driving the CO2 fluctuations seen in atmospheric measurements. Many studies have focused on the potential of global warming to increase vegetation in the Arctic, as trees and shrubs shift northward into previously scrubby tundra. But the current work suggests that the change in the seasonal CO2 signal is too big to be explained by ecosystem shifts that far north. Instead, it seems to be driven primarily by a significant increase in carbon uptake by boreal forests to the south during the prime growing months of June and July.

The exact mechanisms for the forests’ increased appetite for CO2 remain unclear. Earlier studies seemed to suggest that CO2 fertilization could not explain it and that enhanced nitrogen deposition due to industrial activities might be a factor. The current study suggests that a combination of factors may be involved, including the expansion of forests in a warmer climate and a shift towards younger, faster-growing trees in areas where old-growth forests have died off.

“Our models all seem to fail to capture this effect, sometimes woefully,” Keeling says. This raises questions about the answers those models are delivering about the future, he says. Now it is up to climate scientists to explain the data.