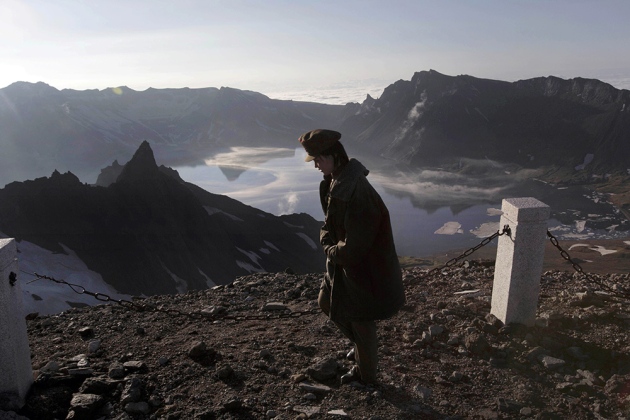 A rare collaboration between North Korean and Western scientists has probed the ground beneath a dangerous volcano on the Chinese–Korean border. The work illuminates the geological plumbing that could underlie possible future eruptions.

“Now we can start to see into the underbelly of the volcano,” says Kayla Iacovino, a volcanologist with the US Geological Survey in Menlo Park, California.

She and her colleagues, led by Ri Kyong-Song of the Earthquake Administration in Pyongyang, Democratic People’s Republic of Korea (DPRK), used seismic data to pinpoint molten rock beneath the mountain. The paper appears on 15 April in Science Advances1.

Called Mount Paektu on the Korean side and Changbaishan on the Chinese side, the volcano is considered one of the region’s most hazardous. Around the year 946, it let loose one of the most powerful eruptions in recorded history, showering ash as far away as Japan. Today, more than 1.6 million people live within 100 kilometres of Paektu.

“This volcano is quiet at the moment, but it’s definitely got potential,” says team member James Hammond, a seismologist at Birkbeck, University of London. “We need to keep an eye on it.”

Lava could potentially erupt as much as 20 kilometres away from the mountain’s summit, says Haiquan Wei, a volcanologist at the China Earthquake Administration in Beijing who has studied the mountain’s past activity2.

Because the volcano straddles the Chinese–North Korean border, scientific studies have been fragmented between the two countries. “People have spent their whole lives studying the volcano and have never seen it from the other side,” says Iacovino. The mountain holds a special significance in Korea as the purported birthplace of both the founder of the first Korean kingdom and of former DPRK leader Kim Jong-Il.

Paektu last erupted in 1903. In 2002 it began shaking with thousands of tiny earthquakes, possibly as magma shifted underground. The seismic unrest ended after several years without any lava erupting — but the episode prompted researchers on both sides of the border to reassess what they knew about the volcano and to try to prepare for what it might unleash in the future.

In 2011, at the invitation of the DPRK government, Hammond went to North Korea with Clive Oppenheimer, a volcanologist at the University of Cambridge, UK. That meeting spawned an unprecedented collaboration to try to understand Paektu better from the Korean side3. With diplomatic support from the American Association for the Advancement of Science in Washington DC and the Royal Society in London, Hammond arranged to bring six state-of-the-art seismometers into North Korea.

It wasn’t easy. It took years to sort out the proper import licences, and the team had to ditch plans to measure conductivity beneath the volcano because the required equipment has a second use in submarine detection. But in the end, Hammond and his colleagues deployed the seismometers in a 60-kilo­metre-long line east from Paektu’s summit, deep into the countryside. “Every year I would visit these families and they would look after our stations for us,” says Hammond. “They clearly wanted to understand this volcano.”

The seismometers remained in place from August 2013 to August 2015 (which meant that they were not present during any of the DPRK’s four nuclear-weapons tests). By analysing how seismic waves travelled beneath the volcano, the scientists found that a significant part of the crust must be at least partially molten. “Whether or not that melt is going to turn into an eruption is a bigger question,” says Iacovino. “But at least we can now start to draw a picture of what’s happening.”

Other studies have hinted at the presence of molten rock beneath the volcano before, says Haibo Zou, a geoscientist at Auburn University in Alabama. But “any new serious research,” he says, ”is of interest”.

Chinese and North Korean scientists monitor Paektu using their own seismic networks as well as gas samples collected from hot springs. But until geologists have a better understanding of what the volcano has done in the past, it will be hard to tell emergency officials how they should prepare for future eruptions, says Iacovino.

For instance, she has been mapping the geology of the ash, pumice and other rocks thrown outward in the AD 946 eruption. Enormous clouds of superheated gas and ash swept downhill, followed by destructive mudslides. If Paektu were to erupt again, it might send water rushing downhill from the summit lake, or clouds of ash skyward to interfere with aeroplane flights across Korea and Japan.

By studying rocks collected during a 2013 visit, Iacovino has found that the AD 946 eruption probably spewed much more sulfur dioxide into the atmosphere than earlier studies reported4. That suggests that Paektu has the potential to alter global climate.

Hammond will be in Pyongyang next week, working on future proposals to expand studies of Paektu. “We’d really like to work together with the Chinese and North Koreans to study the volcano as a whole volcano, using instruments on both sides of the border,” he says. “Ultimately, it’s up to them to work together, and maybe we can be a part of it.”