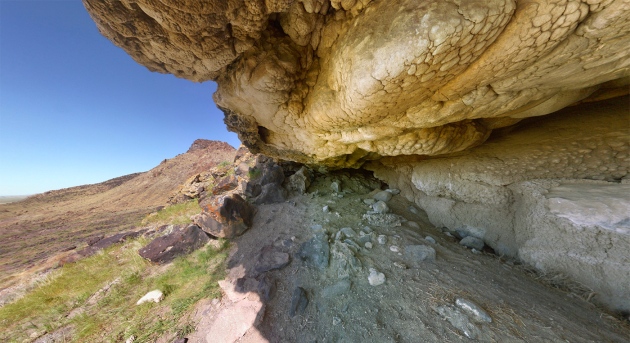 Spirit Cave in Nevada, where archaeologists discovered ancient remains in 1940.

The sequencing of a 10,600-year-old genome has settled a lengthy legal dispute over who should own the oldest mummy in North America — and given scientists a rare insight into early inhabitants of the Americas.

The controversy centred on the ‘Spirit Cave Mummy’, a human skeleton unearthed in 1940 in northwest Nevada. The Fallon Paiute-Shoshone Tribe has long argued that it should be given the remains for reburial, whereas the US government opposed repatriation. Now, genetic analysis has proved that the skeleton is more closely related to contemporary Native Americans than to other global populations. The mummy was handed over to the tribe on 22 November.

The genome of the Spirit Cave Mummy is significant because it could help to reveal how ancient humans settled the Americas, says Jennifer Raff, an anthropological geneticist at the University of Kansas in Lawrence. “It’s been a quest for a lot of geneticists to understand what the earliest peoples here looked like,” she says.

The case follows the US government’s decision this year that another controversial skeleton, an 8,500-year-old human known as Kennewick Man, is Native American and qualifies for repatriation on the basis of genome sequencing. Some researchers lament such decisions because the buried skeletons are then unavailable for scientific study. But others point out that science could benefit if Native American tribes use ancient DNA to secure the return of more remains, because this may deliver long-sought data on the peopling of the region. “At least we get the knowledge before the remains are put back in the ground,” says Steven Simms, an archaeologist at Utah State University in Logan, who has studied the Spirit Cave Mummy. “We’ve got a lot of material in this country that’s been repatriated and never will be available to science.”

The Spirit Cave Mummy is one of a handful of skeletons from the Americas that are more than 10,000 years old (see ‘Sequencing North American skeletons’). Archaeologists Georgia and Sydney Wheeler discovered it in Nevada’s Spirit Cave in 1940. The skeleton, an adult male aged around 40 at the time of his death, was shrouded in a rabbit-skin blanket and reed mats and was wearing moccasins; he was found with the cremated or partial remains of three other individuals. The Wheelers concluded that the remains were 1,500–2,000 years old. But when radiocarbon dating in the 1990s determined that they were much older, the finds drew attention from both scientists and the Fallon Paiute-Shoshone Tribe. The tribe considers Spirit Cave to be part of its ancestral homeland and wanted the remains and artefacts. 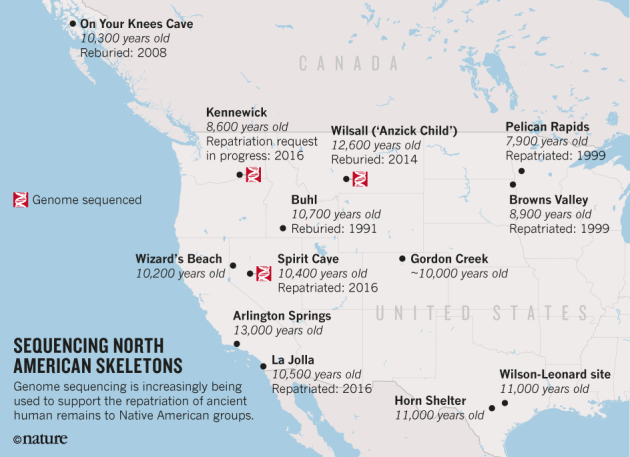 Adapted from Friends of America’s Past; http://go.nature.com/2HBW3P6

The US Native American Graves Protection and Repatriation Act (NAGPRA) mandates that remains be returned to affiliated tribes if they are deemed ‘Native American’ by biological or cultural connections. In 2000, the US government’s Bureau of Land Management (BLM), which oversees the land where the mummy was found, decided against repatriation. The tribe sued, and in 2006 a US District Court judge ordered the agency to reconsider the case, calling the BLM’s decision “arbitrary and capricious”.

The mummy’s remains were stored out of view in a Nevada museum, and placed off-limits to most research, except for efforts to determine its ancestry. In a 2014 monograph based on earlier examination of the remains, US anthropologists Douglas Owsley and Richard Jantz noted that the mummy’s skull was shaped differently from those of contemporary Native Americans from the region (Kennewick Man, Texas A&M Univ. Press). That contributed to the BLM’s decision to seek DNA analysis, says Bryan Hockett, an archaeologist at the bureau’s Nevada office in Reno. The tribe was originally opposed to genetic analysis to prove the mummy’s ancestry, says Hockett, but eventually agreed.

In October 2015, Eske Willerslev, an evolutionary geneticist who specializes in ancient DNA analysis at the Natural History Museum of Denmark in Copenhagen, travelled to Nevada to collect bone and tooth samples from the mummy and other remains for DNA sequencing, after meeting with tribe members several months earlier.

Willerslev’s team concluded that the Spirit Cave remains are more closely related to indigenous groups in North and South America than to any other contemporary population. The BLM gave Nature a preliminary scientific report from the team, and a 31-page memo outlining its reasoning for repatriating the remains. Willerslev declined to comment because his team’s data have not yet been published in a journal.

Hockett says the genome findings offered the only unequivocal evidence that the remains are Native American. No evidence links the remains to any specific group — not even the ancient DNA — but NAGPRA allows the return of human remains to tribes that have a geographical connection. Len George, chair of the Fallon Paiute-Shoshone Tribe, did not respond to requests for comment.

The genome of a 12,600-year-old skeleton from Montana, called the Anzick Child, is the only other published ancient genome from the Americas that is older than 10,000 years. The Spirit Cave remains and the Anzick Child both seem genetically closer to South American groups than to some North American groups, and the migrations behind this pattern are not yet understood, says Raff. One possibility is that both individuals lived before their local populations began spreading across regions of the Americas, says population geneticist Pontus Skoglund at Harvard Medical School in Boston, Massachusetts.

Sequencing ancient DNA, which has become easier and cheaper in recent years, could help to determine the origins of many other ancient bones. Remains as old as the Spirit Cave Mummy are rare, but there are many younger remains that are not clearly affiliated to any tribe, and which might now be deemed Native American through ancient DNA sequencing and thus repatriated, scientists say.

The BLM announced its intentions to repatriate the Spirit Cave remains in October and received no formal objections, says Hockett. But Jantz, the anthropologist who co-led the Spirit Cave skull study and is based at the University of Tennessee in Knoxville, laments the decision. “It’s just a sad day for science. We will lose a lot of information about the history of human occupation in the Americas as a consequence,” he says. Further molecular study of the remains could identify details about the Spirit Cave individuals — from the foods they consumed to the diseases that afflicted them. “I think Willerslev is the last guy who is going to look at these things,” Jantz adds.

Dennis O’Rourke, a biological anthropologist at the University of Kansas, says he would like to see more researchers follow Willerslev’s example and work with Native American groups to decide whether to sequence ancient human remains, rebury them, or both. And Kimberley TallBear, an anthropologist who studies the views of indigenous groups on genetics at the University of Alberta in Edmonton, Canada, says researchers with O’Rourke’s attitude to studying ancient remains are becoming more common. She thinks it is wrong for scientists opposed to repatriation to conclude that tribes are not open to research. “Tribes do not like having a scientific world view politically shoved down their throat,” she says, “but there is interest in the science.”