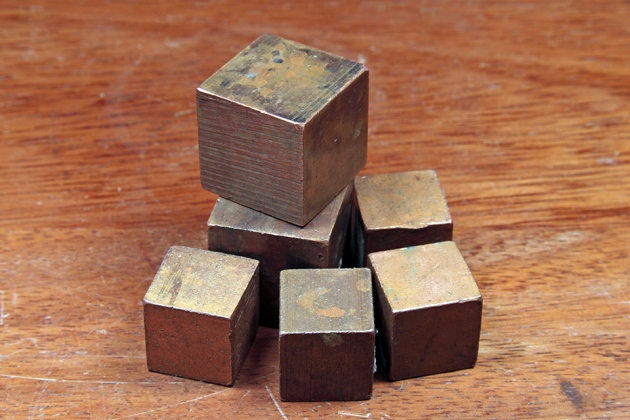 Copper: not a magnetic metal, unless it is combined in thin films with organic molecules.

Two common metals that are not magnetic — copper and manganese — can be transformed into magnets: a surprising effect that involves combining thin films of the metals with carbon-based organic molecules.

The magnetism is weak and fades away after a few days, but the discovery could lead to new kinds of hybrid metal–organic magnets that might be useful in applications such as medical imaging, says Oscar Cespedes of the University of Leeds, UK, who led the work1 reported on 5 August in Nature.

Permanent magnets, such as iron bars, gain their pulling power from the spins of the electrons inside them. This quantum-mechanical property means that each electron generates its own magnetic field. Most electrons couple their spins so as to cancel each other out, producing no overall effect, but some ‘unpaired’ electrons will align with an external magnetic field, and will stay that way when that field is removed. The cumulative effect of these tiny aligned magnetic fields makes the metals iron, cobalt and nickel magnetic at room temperature.

Cespedes and his colleagues made copper and manganese behave this way, too. They laid down films of the metals on layers of buckyballs, which are cage-like molecules made up of 60 carbon atoms, chosen because they are particularly good at stripping electrons from the metal films. This made the films partially magnetic, across a layer a few nanometres thick next to the buckyballs. When an external field was applied and then removed, some 10% of the induced magnetic field remained, producing a weak magnet.

The researchers founded their experiment on a theory devised in the 1930s by theoretical physicist Edmund Stoner (also at the University of Leeds). He explored what makes it possible for an element to be magnetic; in particular, what kind of internal electron structure a material needs in order to make it energetically favourable for unpaired electrons to align their magnetic fields. Cespedes is not sure whether their experiment did cause the internal electronic structures of copper and manganese to exactly meet Stoner's rule — but in any case, the result bodes well for the possibility of inducing magnetism in other non-magnetic metals, he says.

Cespedes hopes that the innovative technique might provide a more-bio-compatible and environmentally-friendly alternative to the gadolinium contrast agents used in magnetic resonance imaging (MRI). It might also, he says, be used in wind turbines, which contain electrical generators with magnetic materials that must be able to retain their polarization while absorbing large amounts of energy. “Turbines currently use iron, cobalt and nickel mixed with rare-Earth elements, but these elements are expensive and difficult to mine,” he says. But, he adds, since turbines need bulky, strong magnets, using a hybrid metal-organic material is "a long way off".

It is important that the results were obtained at room temperature, says Giancarlo Panaccione of the Italian National Research Council in Trieste. That ability could be useful for applications such as high-density computer memory-storage: magnetic ‘bits’ could be stored at the interface between metals and buckyballs, he says. But the induced magnetization falls away over a period of several days as the material oxidizes, he points out (a period that can extend to weeks if the material is covered).

Cespedes acknowledges that more work is needed. But, he says, it could be possible to improve the strength of the magnetic field — and make the effect last longer — by interlacing the metal and organic molecules in a matrix, rather than in layers, or by changing either component.