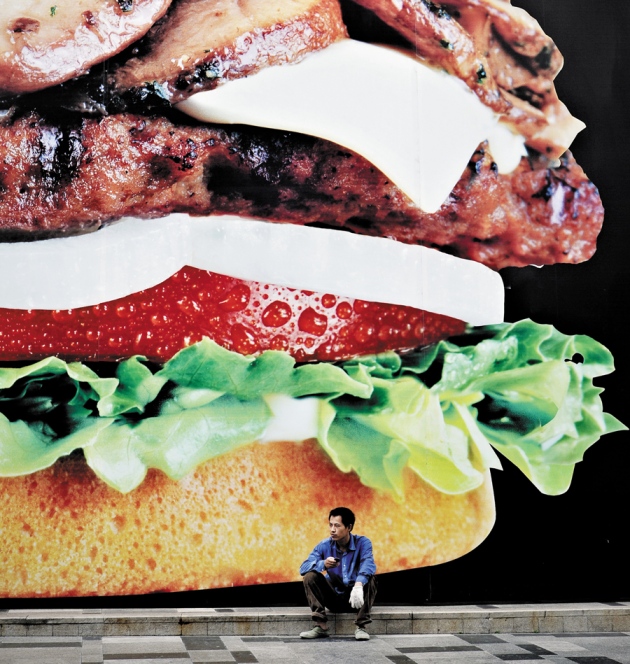 Fast food and urbanization are spreading across the globe — so too is obesity.

Rapid travel, mass migration and the globalization of culture are known to fuel the spread of infectious diseases. The same factors are also increasing the incidence of non-communicable diseases (NCDs) such as cancer, diabetes and heart disease. As developing countries prosper, these conditions are a by-product of rising air pollution, physical inactivity, and consumption of alcohol, tobacco and excess calories.

More people die from cancer, heart disease and diabetes than from infections, famine and complications of pregnancy in all regions except sub-Saharan Africa. NCDs account for 65% of deaths worldwide and make up more than half the global disease burden1, a measure of time lost to death and disability (see 'Deadly and neglected'). Some 80% of the 35 million deaths attributed to NCDs each year are in low- and middle-income countries2. Globally, the economic cost of unhealthy workforces and surging health-care expenditures is projected3 to be US$47 trillion by 2030.

Rich foods, cigarettes, fine wines, leisurely lifestyles — and the accompanying health risks — were once the accoutrements of a good life. The poor seemed to have a different set of problems: malnutrition, hard labour and infectious diseases. Yet urbanization and globalized markets are harmonizing cultures and nudging people worldwide towards unhealthy habits. From Dallas to Dhaka, city streets are filled with fast-food restaurants; billboards advertise unhealthy foods and alcohol. Something must be done.

Researchers have identified cost-effective ways to prevent NCDs and the subsequent widening of health disparities. Local and national governments are key to implementing these efforts. Global governance would be a powerful spur — setting norms, mobilizing funding and holding states accountable. This strategy has already worked for preventing deaths from smoking.

Global agencies should create a dedicated global fund for NCDs, regulate industry to improve nutrition, alter built environments to promote physical activity, and engage diverse sectors of government and other groups in prevention.

The remarkable progress made in curbing tobacco use provides an example of what global regulations can do. Implemented in 2003, the World Health Organization (WHO) Framework Convention on Tobacco Control (FCTC) is one of the most widely ratified treaties in history — 178 nations are now party to convention, accepting requirements to enact robust curbs on tobacco through taxation, prohibitions against advertising, and smoke-free workplaces and public spaces. The WHO offers technical assistance with assessing needs, drafting legislation and exchanging information and technologies.

Although implementation of the FCTC is patchy, it is cited by national courts to justify tobacco-control measures, and the convention has pushed countries towards ground-breaking policies on plain packaging, graphic warnings and sales bans. At least 51 countries have incorporated FCTC provisions into national law, and 79% of parties have strengthened domestic laws governing tobacco4.

Tobacco control has saved an estimated 8 million lives in the United States alone in the past 50 years5. And the process of creating the FCTC galvanized civil society to hold states accountable, most notably by establishing an alliance to advocate for binding international obligations, and by revealing the extent of the tobacco industry's power6.

In every other respect, the global response to NCDs has been weak and fractured. In a systematic analysis of obesity-prevalence research7, no country out of the 188 studied had lowered its obesity rates. The WHO devotes only 8% of its budget to NCDs, compared with 39% to infectious diseases and polio eradication. This lopsided distribution of funding is partly because important donors such as the Bill & Melinda Gates Foundation earmark contributions for diseases such as HIV and malaria that are amenable to concrete targets and easily measured success. These narrow initiatives achieve quick victories, but fail to rein in more widespread health risks.

There has so far been no groundswell of support for NCD prevention. The United Nations did not devote a high-level summit to NCDs until September 2011, by which time it had held three on AIDS. Unlike the AIDS meetings, the NCD summit failed to attract large-scale activism, set targets, take actionable steps or allocate funding. It ignored mental health entirely. The Millennium Development Goals, established by the UN at the start of this century, excluded NCDs; the next set of targets would include NCDs as only a subsidiary goal, if at all.

In May 2012, the WHO did set a global target: a 25% reduction in premature NCD mortality by 2025 (the 25 by 25 goal), followed by a global-monitoring framework and an action plan. The WHO has also adopted strategies on diet, physical activity, alcohol and mental health (see ‘Best buys’). However, these are all voluntary, in stark contrast to WHO treaties on tobacco and infectious diseases.

In 2013, UN secretary-general Ban Ki-moon concluded that national NCD prevention remains “insufficient and highly uneven”. This anaemic political response can be attributed, in part, to governments beholden to business interests. The agriculture industry lobbies for subsidies that lower prices of unhealthy foods, for example, for maize (corn) — some of which is turned into high-fructose corn syrup. The food and alcohol industries lobby for low taxation and light regulation — torpedoing New York City's proposed tax on soft drinks, for instance. So too do industries that emit air pollutants. Companies and the media resist advertising limits. And governments find it hard to oversee multinational corporations that span borders.

A prescription for action

Without strictures such as those that the FCTC places on tobacco, industries shape the policies that should be reining them in. Food and alcohol companies design and market compelling, unhealthy products, often with misleading labels. Despite peddling large quantities of sodium, sugar and trans-fats, junk-food companies have manoeuvred their way into schools and hospitals. Yet NCDs are often framed as a problem of individual responsibility, with prevention policies criticized as paternalistic.

The damage caused by NCDs goes well beyond individuals. These conditions should be reframed as a collective problem that requires a global response.

The WHO should adopt a convention on NCDs modelled on the FCTC. If politics blocks efforts to establish a broad treaty, the WHO could strategically focus on food and alcohol or adopt 'soft' laws, such as codes of practice with provisions for implementation and reporting. These would go well beyond current guidelines on how much sugar and salt people should eat. There are also models for a hybrid between soft and hard law, such as the WHO's Pandemic Influenza Preparedness Framework, which creates contractual duties on the private sector to contribute vaccines to developing countries. 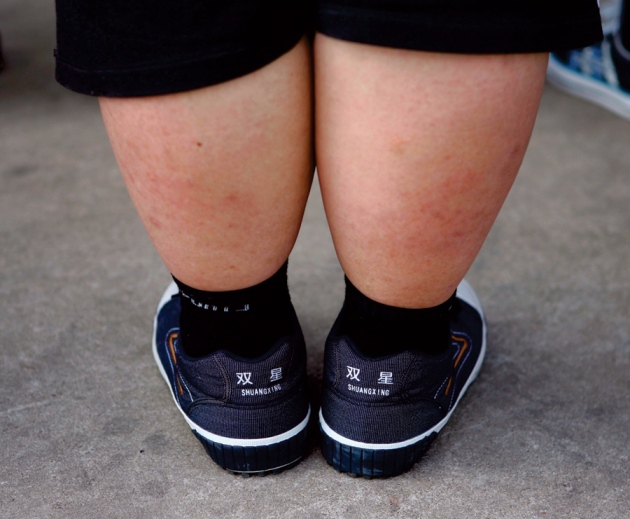 A child at a weight-loss camp in China.

This week, the United Nations will convene a meeting in New York to assess progress on NCD prevention. Attendees, including representatives from non-governmental organizations, the private sector and the WHO, should consider the following four steps, which would make for robust global governance of NCDs.

Ensure sustainable funding. International funding is needed to build capacity in low-income countries to tackle NCDs with health education, corporate regulation, health-worker training and affordable access to treatment. It could help to assess which NCDs can be attributed to the inability of poor families to buy nutritious foods for young children or expectant mothers.

A global fund for health — modelled on the Global Fund to Fight AIDS, Tuberculosis and Malaria — should be created and commit to a ten-year funding scheme to achieve NCD goals by 2025. This will require major shifts in priorities by richer states and philanthropists.

Regulate industry. Some industry–government collaborations have led to healthier packaged foods. The United Kingdom's salt-intake-reduction programme sets voluntary targets for 85 categories of processed foods. This helped to reduce the population's sodium intake by 15% between 2003 and 2011 and probably contributed to lower rates of cardiovascular disease8.

That said, voluntary guidelines often stave off or stall more-effective regulation. In some countries, including the United States, the food industry has adopted weak self-regulatory codes on advertising to children, which has forestalled tougher government regulation.

Such rules are politically difficult to implement. As countries impose higher taxes or stringent controls, they risk losing jobs and tax revenues if companies move to more-accommodating jurisdictions. However, if governments acted together, companies could not play regions against each other. Nations should cooperate to create binding agreements that would overcome political disincentives9.

Global governance would facilitate these environments in several ways: by providing templates for redesigning public spaces, schools and workplaces; by offering technical assistance in architecture and city planning; and by creating incentives, such as competitive grants, to promote innovative city landscapes or food programmes. Such governance could promote information exchange, demonstrated by the heart-disease prevention programme in Finland, which included initiatives to increase physical activity and inspired similar prevention measures in other countries.

Prioritize prevention. NCD prevention demands engagement from multiple sectors of government, industry, philanthropy and society. An effective strategy would coordinate ministries of finance, education, labour and urban planning. A good example is the Agita São Paulo ('get São Paulo moving') campaign in Brazil, praised by the WHO and copied in other Latin American countries, encouraging large companies to promote physical activity among their employees10.

There are multisector examples operating globally: the UN Food and Agriculture Organization harmonizes food and labelling standards and fights for food security through its Codex Alimentarius standards; and the World Trade Organization adjudicates free-trade agreements. Although tobacco, alcohol and food — risk factors for NCDs — are already under some international control, prevention rarely features prominently in these regimes. Stronger WHO governance would help to counter forces that prioritize short-term economic concerns over NCD prevention and treatment.

There are those who argue that the human suffering and economic toll of heart disease, stroke, diabetes, cancer and so on are a matter of personal choice, family responsibility and the free market. But there is a better way to foster healthier behaviour and environments. The NCD crisis is largely of our collective making and can be reversed only through urgent collective action.

What society has to gain from preventing NCDs is not just longevity and prosperity, but also the simple pleasures that come from leading healthier, more vigorous lives — an aspiration well within our grasp.