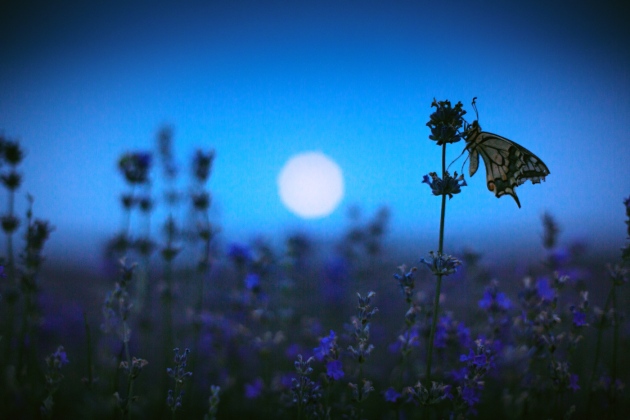 Disruptions to night-time pollination activities could also harm day-time pollinators such as bees and butterflies.

When the sun goes down, moths, beetles and other nocturnal insects that spread pollen between plants go to work. But the latest research reveals that these creatures might be at risk from artificial lighting.

Scientists working in Switzerland report large drop-offs in pollinator visits as well as reduced fruit production in patches of cabbage thistle (Cirsium oleraceum) under artificial lighting at night, in a study published on 2 August in Nature1. Researchers were largely in the dark about how problems such as light pollution affected pollinators. But the study authors say their work highlights how the human footprint can reverberate throughout an ecosystem — even after people have gone to bed.

The researchers placed mobile street lamps over plots of cabbage thistle that had never before been exposed to artificial light at night. Using night-vision goggles to observe and capture pollinators, the team found that those plots had 62% fewer visitations from insects than plots situated in darkness. The artificially lit plants also saw 29% fewer pollinator species.

Illuminated thistles produced significantly fewer developed fruits than those in darkness. Plants covered in pollinator-proof bags, meanwhile, yielded the same relative number of fruits under artificial light and in the dark.

Even though daytime pollinators are usually more numerous than night-time pollinators, they were unable to make up the difference in lost pollination of plants kept under artificial lighting. This could be because some studies have shown that night-time pollinators seem to be more effective at transferring pollen between plants than their diurnal counterparts, says Eva Knop, an ecologist at the University of Bern in Switzerland and first author of the study. “Thus, it is not just the quantity but also the quality that counts.”

The study by Knop and her team only looked at 14 plots, but their work hints at the interconnectedness of both daytime and night-time pollinators such as moths, flies and even earwigs, as well as the plants they frequent. For instance, if lights drive away night-time pollinators, that could lead to less fruit and fewer plants. It’s a change that could ripple through daytime pollinator populations, which rely on plants such as cabbage thistles for food, according to the study authors.

This study is “the first to show that light pollution not only affects moth communities, but the ecological process of pollination”, says Darren Evans, an ecologist at Newcastle University, UK, who has studied how artificial light affects moths.

This doesn’t bode well for moths in particular, says Evans, because they’re undergoing significant long-term declines across Europe. Light pollution is also on the rise globally. “Studies such as this demonstrate that moths are part of an intricate web of interactions and, in this case, perform important roles as pollinators,” says Evans.

It’s not all bad news, however. Jon Sadler, an ecologist and biogeographer at the University of Birmingham, UK, has found that although city lighting can negatively affect the movement of bats2, those same lights can also attract pollinators such as moths, which bats love to devour.

Sadler also points out that not all artificial light is the same. It varies in direction, intensity and duration — each of which could affect the overall impact lights have on surrounding plants and animals. He adds that it’s entirely possible that light pushes night-time pollinators into darker areas, and that this might actually enhance pollination in those places.

It’s not clear why artificial light has a negative impact on the pollinators, says Knop. It could mess with the plants’ circadian rhythms and alter scent emissions or nectar production, she says.

What’s interesting, however, is that the fate of night pollinators seems to be intertwined with that of the day pollinators, Knop adds. And in some instances, artificial light may be unravelling that tapestry.