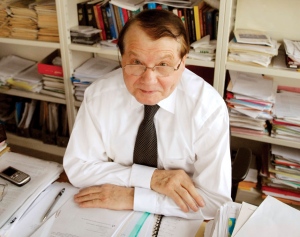 A fledgling AIDS research centre in Cameroon, already struggling to find a scientific leader, is now facing insurrection from an unlikely quarter: a group of 35 Nobel prizewinners.

The laureates are calling for the centre’s interim scientific director, fellow prizewinner Luc Montagnier, to be removed from the part-time post. Observers say that unless the leadership crisis is resolved quickly and decisively, it could harm the prospects of the Chantal Biya Inter­national Reference Centre (CIRCB) in Yaoundé.

The centre has a comprehensive AIDS research and health-care programme, in particular testing and treating newborn babies to reduce maternal transmission of HIV. It is the only research institution in central Africa with the technology and expertise to monitor people with HIV thoroughly, and one of the few African sources of hard data about the spread of the disease. It has an annual budget of about US$1 million, an array of inter­national collaborations and around 20 local staff members, most of whom trained abroad.

Nature has learned that the Nobel laureates wrote on 9 June to Paul Biya, president of Cameroon, asking him to reconsider Montagnier’s appointment. Montagnier, head of the World Foundation for AIDS Research and Prevention in Paris, shared the 2008 Nobel Prize in Physiology or Medicine for discovering HIV.

The laureates argue that his embrace of theories that are far from the scientific mainstream, as well as what they claim are anti-vaccination views, risk hurting the CIRCB’s research, health-care programme and reputation. Montagnier has suggested, for example, that water can retain a ‘memory’ of pathogens that are no longer present1; that the DNA sequences of pathogens emit electromagnetic waves that could be used to diagnose disease2, 3; and that stimulating the immune system with antioxidants and nutritional supplements may help people to fight off AIDS4.

The letter was coordinated by Richard Roberts, a Nobel-prizewinning molecular biologist and chief scientific officer of New England Biolabs in Ipswich, Massachusetts, who also wrote personally to Biya on 4 June, to resign from the CIRCB’s scientific board. Roberts says he is concerned that Montagnier plans to pursue his unorthodox research at the centre. Several other board members have also resigned.

Robert Gallo, head of the Institute of Human Virology at the University of Maryland, Baltimore, who had battled with Montagnier over which of them had discovered HIV, has also entered the fray. On 4 June, Gallo wrote to Biya expressing concerns similar to those of the Nobel laureates and informing Biya that his institute, a founding sponsor of the CIRCB, was immediately severing its links with the centre.

Montagnier deplores what he describes as “ad hominem attacks” and “plain lies”, and says that there is an “ignominious campaign” against him and his group. He says that history is full of pioneers whose ideas were at first given a chilly reception by a conservative research community. “I believe this is happening again to me, and it is very sad that it involves Nobel Prize laureates attacking a fellow laureate,” he says.

The last straw for Montagnier’s critics seems to have been his appearance in May alongside vaccine sceptics at a conference in Chicago, Illinois, organized by US patient-advocacy groups AutismOne and Generation Rescue. Montagnier’s talk, on his hypothesis that bacterial infections may be one of many causes of autism spectrum disorder, states: “There is in the blood of most autistic children — but not in healthy children — DNA sequences that emit, in certain conditions, electromagnetic waves.”

Montagnier defends his research, pointing out that some clinicians have observed improvements in symptoms of autism after long-term treatment with antibiotics. He says that he has never argued that vaccination could cause autism. “Many parents have observed a temporal association, which does not mean causation, between a vaccination and the appearance of autism symptoms,” he says. “Presumably vaccination, especially against multiple antigens, could be a trigger of a pre-existing pathological situation in some children.”

The CIRCB, founded in 2006, is named after President Biya’s wife, who has championed efforts to fight AIDS in Africa. Montagnier’s AIDS foundation was a founding partner; Montagnier is also president of the now-defunct scientific advisory board, and vice-president of the management board.

The current crisis compounds problems caused by the centre’s lack of stable full-time leadership. In March, its management committee appointed Montagnier to replace former interim scientific director Vittorio Colizzi, an AIDS researcher on secondment from the Tor Vergata University in Rome, who had held the post since 2009. Colizzi was standing in until a full-time scientific director could be hired, but a recruitment process last year failed to settle on an agreed candidate. Some candidates had also expressed misgivings about the job, because at the time the scientific director and administrative director had to share power, a situation that caused tensions, says Colizzi. To address this issue, a presidential decree issued on 31 May merged the positions to create the post of permanent director, with full control of the centre. The move should make it much easier to attract a leading scientist to the post, says Jacques Theze, an immunologist at the Pasteur Institute in Paris, a former member of the CIRCB’s scientific board.

The decree also required that many of the centre’s posts and committees be disbanded or renewed, creating an uncertain transitional period. On the day that Roberts resigned, for example, the scientific board was officially dissolved, and no clear timetable has been set to reestablish it. Colizzi is concerned that this deprives the centre of its main mechanism for enforcing rigorous peer-review and ethical oversight of research proposals. Montagnier says that he intends to continue all research previously approved by the board, and that he will ask the next board to review the programme. He also plans to embark on new research, including a “key project” using his electromagnetic-wave theory to detect reservoirs of HIV in the body that persist after antiretroviral treatment. Any new projects, including his own, will need to be approved by the centre’s science board and ethics committee, he says.

Jean Stéphane Biatcha, head of the centre’s management board and a presidential adviser, recognizes the “very serious dis­agreement” but says that the president and the Ministry of Health will quickly enact the 31 May decree, and so will renew the scientific advisory board and begin the search for a permanent director.

Theze says that he would have preferred Montagnier’s detractors to have taken a more diplomatic approach, and warns that the high-level criticism, and the resulting controversy, risks tarnishing the credibility and reputation of the centre, which he says is unfair, because the CIRCB has enormous potential. He worries that the episode might also discourage scientists from applying for the position of director.