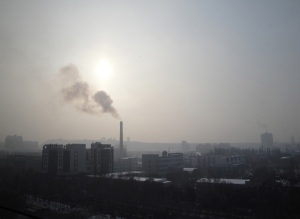 Nitrogen-containing pollutants from agriculture, transport and industry in China has increased by more than half in 30 years, a study shows, adding to concerns about the country’s deteriorating environment.

“Rapid economic growth in China has driven high levels of nitrogen emissions in the past few decades,” says Zhang Fusuo, an agriculture researcher at the China Agricultural University in Beijing and a co-author of the study.

Once emitted into the air, key nitrogen pollutants — ammonia and nitrogen oxides — can be transformed to secondary pollutants such as ammonium and nitrates, and then washed to Earth by rain and snow. The process, known as nitrogen deposition, can do great damage to ecosystems, causing soil acidification, fertilizing harmful algal blooms and threatening biodiversity, says Zhang. But until his study, “there was little direct evidence for the magnitude of the problem in China”.

By analysing data from 270 monitoring sites around the country, Zhang and his colleagues found that the amount of nitrogen deposition, as measured in precipitation, had increased by 60% — or 8 kilograms per hectare per year — between 1980 and 2010. The study is published in Nature today1.

The researchers went on to assess how this had affected ecosystems. They found that the leaves of a range of herbaceous and woody plants across China were absorbing 33% more nitrogen than in 1980. Similarly, nitrogen uptake by rice, wheat and maize (corn) on long-term unfertilized farmland had increased by about 16% in the same period.

“This is the first major analysis of nitrogen deposition in China,” says Mark Sutton, an environmental scientist at the Centre for Ecology and Hydrology in Edinburgh, UK. “The scale of the study is impressive. It allows the statistical power to detect changes and trends.”

“The composition of nitrogen deposition has changed over the years,” says Zhang. In 2010, about one-third of deposited nitrogen was in the form of nitrate, with the rest being ammonium; by contrast, in 1980, nitrate made up just 17% of deposited nitrogen. This suggests, he says, that nitrogen oxide emissions from transport and industry are increasing more rapidly than ammonia emissions from agriculture.

“This is consistent with the growth of those sectors,” says Zhang. Since the 1980s, the use of nitrogen fertilizers and the number of livestock have doubled, whereas coal consumption has increased more than 3-fold and the number of motor vehicles more than 20-fold.

If the current trends persist, ammonia emissions will increase by 85% by 2050; nitrogen oxide emissions will go up more than eightfold. “The impact will be unthinkable,” says Zhang.

Sutton, who co-authored a commentary2 published alongside Zhang's article, points out that nitrogen is not just a Chinese problem. Globally each year, around 140 million tonnes of nitrogen is lost to the environment as ammonia, nitrogen oxides and other compounds. That figure is projected to increase by 70% by 2050 — when emerging economies in Latin America and South Asia are likely to have the same nitrogen pollution problems as China.

This “is exacerbating climate change and having a whole range of effects on the environment and public health,” says Sutton. According to a report commissioned by the United Nations Environment Programme (UNEP) and launched on 18 February by the Global Partnership on Nutrient Management and International Nitrogen Initiative, nitrogen pollution causes US$200-US$2,000 billion of damage around the world each year3.

“It’s time to curb global nitrogen pollution,” says Sutton, who led the UNEP study. Improving practices in agriculture — the biggest contributor of nitrogen pollution worldwide — should be a top priority, he says.

“Fertilizer overuse is a common problem, especially in developing countries,” agrees Zhang. In an earlier study4, he and his colleagues found that Chinese farmers use an average of around 600 kilograms of nitrogen fertilizers per hectare per year, but that could be cut by up to two-thirds without affecting crop yields.

Furthermore, says Sutton, “80% of the nitrogen in crops grown globally goes to feed livestock,” says Sutton. Higher consumption of meat and diary products, especially in developed countries, has substantially increased global nitrogen pollution. “Recycling nitrogen from manure and sewage would increase the efficiency of nutrient use, while reducing pollution and improving crop production.”

To make a real difference, he adds, “governments should join forces to better manage the global nitrogen cycle.”