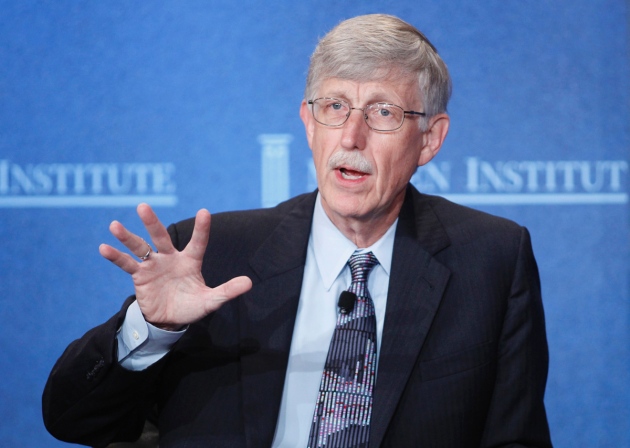 James Anderson works at the US National Institutes of Health (NIH) in Bethesda, Maryland, but he sounds like an eager venture capitalist when he talks about researchers supported by an agency programme to fund 'high-risk, high-reward' grants. “They’re doing work they’ve never done before — and no one ever has,” says Anderson, who directs the NIH's division of programme coordination, planning and strategic initiatives.

Now there is word that such an approach to funding may become more common at the NIH. On 5 December, agency director Francis Collins told an advisory committee that the NIH should consider supporting more individual researchers, as opposed to research proposals as it does now — an idea inspired in part by the success of the high-stakes Pioneer awards handed out by the NIH's Common Fund.

“It’s time to look at balancing our portfolio,” says Collins, who plans to pitch the idea to NIH institute directors at a meeting on 6 January.

The NIH currently spends less than 5% of its US$30-billion budget on grants for individual researchers, including the annual Pioneer awards, which give seven people an average of $500,000 a year for five years. In contrast, the NIH’s most popular grant, the R01, typically awards researchers $250,000 per year for 3‒5 years, and requires a large amount of preliminary data to support grant applications.

Collins says that the NIH has no plan to move away from R01s. But he notes that a 2012 report1 commissioned by the NIH found that Pioneer awardees publish more highly cited papers than R01 recipients. It also concluded that Pioneer recipients' publication records suggest that their productivity is similar to that of researchers funded by the Howard Hughes Medical Institute (HHMI), based in Chevy Chase, Maryland, whose support can be renewed in five-year increments.

“We get more innovation per dollar,” says Anderson of the NIH’s Pioneer programme.  Its grants are awarded to recipients through a combination of interviews, reference checks and reviews that assess the “visionary” potential and technical feasibility of applicants’ projects.

The idea of funding individuals is not new. There are the HHMI awards, and since 2010, the UK Wellcome Trust, a charity based in London, has directed its funding to promising researchers, allowing them to pursue research directions without oversight. And several NIH institutes offer grants geared towards individual researchers, such as the $500,000 Avant Garde grant awarded by National Institute on Drug Abuse for innovative HIV research.

But critics say that there is little, if any, evidence that this approach is superior. “'People versus projects’ is the HHMI bumper sticker, but it’s a misreading of what makes the HHMI great,” says Pierre Azoulay, an economist at the Massachusetts Institute of Technology in Cambridge. Azoulay suggests that the findings of the NIH’s 2012 report may actually reflect factors such as the impact of the HHMI’s unusually lengthy funding windows, which allow a lot of time for innovation. In contrast, he says, “the Pioneer grants are freedom with an expiration date”.

Daniel Sarewitz, co-director of the Consortium for Science, Policy and Outcomes at Arizona State University in Tempe, adds that funding individual researchers may well increase the number of publications they produce. “But that may or may not have anything to do with enhancing the NIH's potential to contribute to actual health outcomes”, such as translation of research into the clinic, he says.

Others say that Collins’s proposal is worth pursuing. “The field of biology has changed so much in recent years that different types of researchers are needed,” says Hamilton Moses, a neurologist and chairman of Alerion Advisors, a consulting firm based in North Garden, Virginia. “We’re in an era now where insights will come from people thinking through the implications of data,” he says, rather than simply producing data in order to secure grants. He likens this to the distinction between experimental physics, which is more project oriented, and theoretical physics, in which advances come primarily from individuals.

If nothing else, funding researchers for longer periods will free them from having to review and apply for so many grants, which can take up to 40% of their time, says John Ioannidis, an epidemiologist at Stanford University in California. “We should be looking at a complete paradigm shift,” he says.