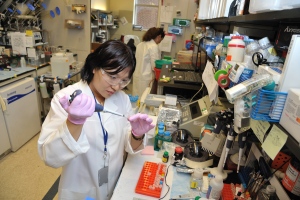 A skeleton staff at the US National Institutes of Health has struggled to keep experiments afloat.

Bleak grey skies mirror the mood of the skeleton staff trickling through the gates of the main US National Institutes of Health campus in Bethesda, Maryland. Most of the principal investigators are absent: without students to advise or meetings to attend, there is little point in being there. Perhaps one out of every ten windows is lit up, revealing lonely postdocs working on what few experiments they are allowed to maintain as the US government shutdown drags on.

On 1 October, after federal budget negotiations reached an impasse and forced the shutdown, the NIH sent 73% of its 18,646 employees home. During the second week of the shutdown, the US Department of Health and Human Services put nearly 1,000 more on unpaid furlough, or enforced leave. As Nature went to press, there were suggestions that the Republican-controlled US House of Representatives could come to a deal with the presidential administration and the Democratic-controlled Senate, which could reopen the govern­ment. But during a visit to the NIH on 9 October, Nature found remaining staff members grimly working to keep crucial research efforts afloat. Notably, 1,437 clinical studies are continuing and a few trials have been able to enrol a handful of desperately ill patients. Technicians at animal facilities have stayed on, ensuring that the NIH’s 1.4 million rodents and 3,900 non-human primates receive care. And several hundred employees are allowed to maintain irreplaceable cell lines.

Yet researchers are still finding themselves severely hobbled. One of the worst problems, some say, is the ban on ordering necessary lab materials such as enzymes and chemicals for culturing cells. “We can hold out for maybe a couple weeks with what we have, then we’re in real trouble,” says one lab head from the National Institute of Allergy and Infectious Diseases (NIAID). Like all of the NIH employees who spoke to Nature, he asked to remain anonymous because he is not authorized to talk to the media. Many experiments are being frozen — in some cases literally — as labs decide which can continue, which must be put on hold and which have to be abandoned. “If this goes on, whole experiments will begin to crumble,” says the NIAID researcher.

With confusion reigning, the shutdown is playing out in different ways across the NIH’s 27 institutes and centres. At the NIAID, for instance, lab heads have been instructed that they cannot have more than two people in a lab at any given time. Some institutes are allowing lab heads to recall workers as needed, whereas others have issued no clear directives. A few postdocs are ignoring the furlough, saying that they have had no specific orders to leave campus. One says that he and his colleagues have not been bothered yet, but he worries about being revealed if an accident occurs in the lab.

Lab heads, some of whom are themselves barred from campus, say that they have been told to write out precisely what each employee should be doing each day, and to justify each project. Mike Askenase, a graduate student at the University of Pennsylvania in Philadelphia who does research at the NIAID, is allowed to work for just eight hours a week and only on experiments “that would cost more to shut down than to continue”. He says his lab studies “mouse plague”: Yersinia pseudotuberculosis, which in mice causes cysts and gut problems over the course of two to three months. The disease progression cannot be rescheduled, he says, and most researchers did not count on a shutdown when they started their experiments months ago. With just two people at a time in the lab, some parts of the experiments may go unfinished.

Researchers working on animals are among the most worried. One postdoc from the National Cancer Institute says that her security access was revoked at first, but after her adviser pleaded her case, she was given permission to enter her building for one hour per day to advise the technicians who are caring for her mice. The rodents were injected with cancerous cells several months ago, she says, and some of their tumours have now grown so large that the animals need to be killed. She is grateful for that one hour, she says, because it allows her to direct the technicians to take tissue biopsies so that she will be able to pick her experiment back up once the shutdown ends.

Other animal researchers say that the shutdown is affecting their projects in more unpredictable ways. One NIH scientist who works with primates says that it is keeping him from retrieving samples from the primate facilities in Poolesville, Maryland, 40 kilometres from Bethesda. Regulations require that animal-tissue specimens be transported in a government car, but the shutdown has kept government vehicles out of use. And if he cannot do his work, which involves human therapeutics, the researcher questions the morality of keeping the primates. “I don’t think it’s ethical to have an animal in a cage if we’re not doing experiments on it,” he says.

There is one place on campus that still seems to be doing good business: the small cafeteria in the NIH’s Clinical Center. Normally used by patients, it is now the only place open to eat. The buzz of conversation there seems muffled. Discussions of science are overshadowed by doubt, worry and uncertainty.