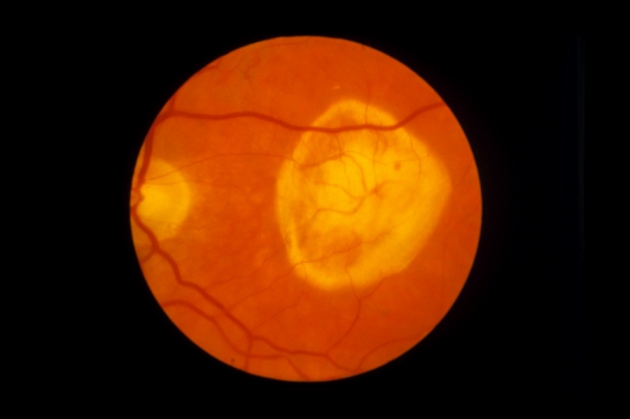 Macular degeneration of the retina is one of the conditions researchers hope can be treated with induced pluripotent stem cells.

A Japanese patient with a debilitating eye disease is about to become the first person to be treated with induced pluripotent stem cells, which have generated enthusiastic expectations and earned their inventor a Nobel Prize. A health-ministry committee has vetted researchers' safety tests and cleared the team to begin the experimental procedure.

Masayo Takahashi, an ophthalmologist at the RIKEN Center for Developmental Biology (CDB) in Kobe, has been using induced pluripotent stem (iPS) cells to prepare a treatment for age-related macular degeneration. Unlike embryonic stem cells, iPS cells are produced from adult cells, so they can be genetically tailored to each recipient. They are capable of becoming any cell type in the body, and have the potential to treat a wide range of diseases. The CDB trial will be the first opportunity for the technology to prove its clinical value.

In age-related macular degeneration, extra blood vessels form in the eye, destabilizing a supportive base layer of the retina known as the retinal pigment epithelium. This results in the loss of the light-sensitive photoreceptors that are anchored in the epithelium, and often leads to blindness.

Takahashi took skin cells from people with the disease and converted them to iPS cells. She then coaxed these cells to become retinal pigment epithelium cells, and then to grow into thin sheets that can be transplanted to the damaged retina.

Takahashi and her collaborators have shown in monkey studies1 that iPS cells generated from the recipients' own cells do not provoke an immune reaction that causes them to be rejected. There have been concerns that iPS cells could cause tumours, but Takahashi's team has found that to be unlikely in mice2 and monkeys1.

To counter further fears that the process of producing iPS cells could cause dangerous mutations, Takahashi's team performed additional tests of genetic stability. Guidelines covering the clinical use of stem cells require researchers to report safety testing on the cells before conducting transplants.

Takahashi appeared in front of a 19-member health-ministry committee for the safety of the clinical use of stem cells. She was flanked by Shinya Yamanaka, the biologist who first created iPS cells. Yamanaka shared the 2012 Nobel Prize in Physiology or Medicine for his breakthrough and now heads the Center for iPS Cell Research and Application in Kyoto. The health ministry declined Nature's request to comment on the kinds of genetic data that were presented, but said that no problems were found (see 'Stem cells cruise to clinic').

The team's iPS cells could now be surgically implanted into a trial participant within days, according to one RIKEN source; most of the Japanese media expect the procedure to take place some time this month. It will be performed by a surgeon at the Institute of Biomedical Research and Innovation, next to the CDB; RIKEN would not reveal the name of the surgeon. The team plans to monitor the cell recipient for one year after the operation. The pilot study will eventually involve six participants.

The news could be a welcome boost for the CDB, which since February has been mired in controversy over now-retracted papers concerning a procedure for generating stem cells (see the special collection 'The rise and fall of STAP'). The centre has been threatened with having its staff numbers cut in half.

The article has been updated to report the news that the anticipated procedure took place on 12 September.