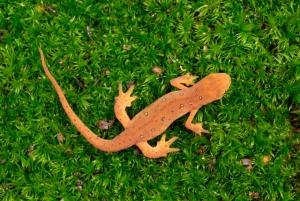 The Eastern, or red-spotted, newt may have evolved the ability to regenerate organs and limbs in relatively recent times.

The ability of some animals to regenerate tissue is generally considered to be an ancient quality of all multicellular animals. A genetic analysis of newts, however, now suggests that it evolved much more recently.

Tiny and delicate it may be, but the red spotted newt (  Notophthalmus viridescens) has tissue-engineering skills that far surpass the most advanced biotechnology labs. The newt can regenerate lost tissue, including heart muscle, components of its central nervous system and even the lens of its eye.

Doctors hope that this skill relies on a basic genetic program that is common — albeit often in latent form — to all animals, including mammals, so that they can harness it in regenerative medicine. Mice, for instance, are able to generate new heart cells after myocardial injury1.

The newt study, by Thomas Braun at the Max Planck Institute for Heart and Lung Research in Bad Nauheim, Germany, and his colleagues, suggest that it might not be so simple.

Attempts to analyse the genetics of newts in the same way as for humans, mice and flies have so far been hampered by the enormous size of the newt genome, which is ten times larger than our own. Braun and his colleagues therefore looked at the RNA produced when genes are expressed — known as the transcriptome — and used three analytical techniques to compile their data.

The team compiled the first catalogue of all the RNA transcripts expressed in N. viridescens, looking at both primary and regenerated tissue in the heart, limbs and eyes of both embryos and larvae.

The researchers found more than 120,000 RNA transcripts, of which they estimate 15,000 code for proteins. Of those, 826 were unique to the newt. What is more, several of those sequences were expressed at different levels in regenerated tissue than in primary tissue. Their results are published in Genome Biology2.

The findings add to existing evidence that the ability evolved recently, says Jeremy Brockes of University College London, whose research provided the first evidence that regenerating tissue in salamanders express proteins that are not found in other vertebrates3.

“I no longer believe that there is an ancestral program that is waiting to be reawakened,” Brockes says. “However, I absolutely do believe it’s possible to coax mammal tissues into regenerating to a greater degree with the lessons we learn from newts.”

But saying that the trait is either ancestral or recent is probably too “black and white”, says Elly Tanaka of the Center for Regenerative Therapies in Dresden, Germany. The truth, she says, could be somewhere in the middle. “It may in fact be that regeneration is ancestral, but that newts have species-specific adaptations that allow it to have such spectacular regenerative capacities compared with other vertebrates.”

Moreover, Tanaka adds, scientists would do well to look for more grey zones in the potential for harnessing the regenerative capacities of newts (and of other animals, such as fish). Rather than focusing on spectacular, but perhaps unlikely, scenarios in which amputees could regrow entire limbs, researchers should instead focus on more plausible options, such as improving the healing of scars and burns or increasing the speed of organ regeneration.