In June, scientists, politicians and campaigners of all stripes will flock to Rio de Janeiro, Brazil, for the United Nations’ fourth Earth summit, devoted to sustainable development and the green economy. The conference — undoubtedly the major environmental meeting of 2012 — comes 20 years after the UN Framework Convention on Climate Change was signed at the first UN Earth summit, also in Rio.

The source of Martian methane

NASA’s car-sized rover, Curiosity, is set to arrive on Mars in August. The US$2.5-billion craft will be lowered by an innovative landing system — the ‘sky crane’ — into Gale crater, where it will study rock strata in a bid to unpick the red planet’s watery past. It will also sniff for methane in Mars’s atmosphere, and could reveal whether the gas is being produced by geological processes — or by microbial martian life. Farther afield, NASA’s Kepler mission surely ought to find a true extrasolar twin for Earth, with just the right size and orbit around a Sun-like star to be habitable. 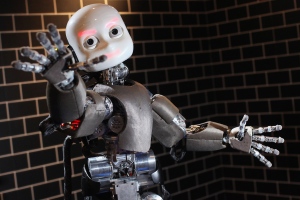 Will iCub and his robot friends win a €1-billion grant this year?

Six visionary research proposals will vie for huge grants from the European Commission’s Future and Emerging Technologies Flagship scheme. The two winning projects, to be announced in the latter half of the year, will each receive €1 billion (US$1.3 billion) over the next decade. In the running are projects on graphene, the promising new form of carbon; robot companions for the lonely; planetary-scale modelling of human activities and their environmental impact; autonomous energy-scavenging sensors; ways to apply research data more efficiently in health care; and a supercomputer simulation of the brain.

The Large Hadron Collider, the giant particle accelerator at CERN, near Geneva in Switzer-land, will gather enough data this year to either confirm or rule out the existence of the simplest form of the Higgs boson, a key part of the mechanism that is thought to confer mass on other matter. A riskier bet would be on physicists finding an example of a Majorana fermion, hypothesized to be massless, chargeless entities able to serve as their own antiparticles, which could be useful for forming stable bits in quantum computing. Experiments have suggested that in materials known as topological insulators, the collective motions of electrons create a quasiparticle that behaves like a Majorana.

Biologists know that much of what was once termed ‘junk’ DNA actually has a role. But which sequences are functional — and what do they do? The best answer so far will come with a major update from the US National Institutes of Health’s ENCODE (Encyclopedia of DNA Elements) project, which aims to identify all the functional elements in the human genome.

Two monoclonal antibodies to treat Alzheimer’s disease — solanezumab and bapineuzumab — would be a big hit if they reported positive results from phase III trials in 2012. Both bind to the amyloid-β peptides that make up the protein plaques seen in the brains of people with the disease. Meanwhile, the US Food and Drug Administration will once again consider the thorny issue of approving obesity drugs: it rejected one last year because of worries over side effects. It will also decide whether to approve a pioneering drug for cystic fibrosis, ivacaftor, made by Vertex Pharmaceuticals of Cambridge, Massachusetts. The drug works only for people with a particular genetic mutation, but would be the first to treat the disease’s underlying cause, rather than its symptoms. And blockbuster drugs will continue to lose patent protection, including the anticlotting Plavix (clopidogrel) and the antipsychotic Seroquel (quetiapine).

Raiders of the lost lake

Within weeks, Russian researchers hope to finish drilling through Antarctica’s ice sheet to reach Lake Vostok, a huge freshwater lake roughly 3,750 metres beneath the surface. It’s a race against time: 10–50 metres of ice separate the team from its goal, which it must reach before the last aircraft of the season leaves in February. There’ll be more drilling research in April, when Japan’s Chikyu ship sets sail to bore into the underwater fault that caused the magnitude-9.0 Tohoku earthquake last year.

South Africa and Australia will find out by March which of them might host the $2.1-billion Square Kilometre Array (SKA), which would be the world’s largest radio telescope if it is built. The decision will be made by the SKA’s programme development office in Manchester, UK. Meanwhile, the Atacama Large Milli-meter/Submillimeter Array in Chile’s Atacama Desert should be 60% complete by the end of the year.

In February, SpaceX of Hawthorne, California, hopes to be the first commercial firm to fly an unmanned cargo craft to the International Space Station — a milestone in private spaceflight. As for government space efforts, China, brimming with confidence after last year’s docking of the unmanned spacecraft Shenzhou-8 with the experimental module Tiangong-1, hopes to send astronauts up for a manned docking manoeuvre this year.

Synthetic biologists can build entire genomes from scratch, working from natural models, and they can also rewire the genetic circuitry of living things. But so far, no one has united the two approaches: Craig Venter’s synthetic genome of 2010 was cribbed wholesale from a bacterium and contained no new genetic circuitry beyond a DNA watermark. Might 2012 see the first really useful artificial genome?