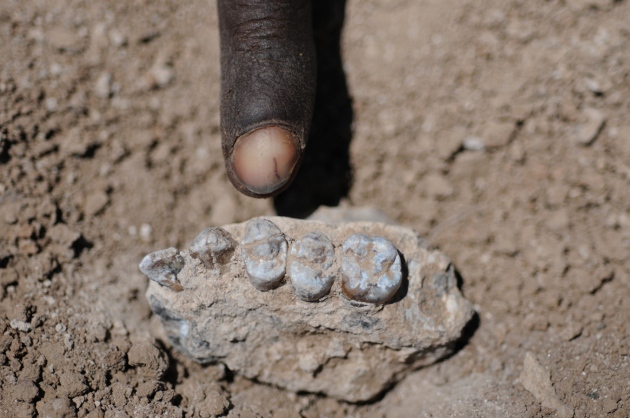 Welcome, Lucy's neighbour. Fossilized jaws and teeth found1 in northern Ethiopia belong to an ancient human relative that researchers say lived around the same time as Lucy's kind, Australopithecus afarensis, but is a distinct species. The remains of the new species, which has been dubbed Australopithecus deyiremeda and lived between 3.5 million and 3.3 million years ago, were uncovered just 35 kilometres from the Hadar site at which Lucy and other A. afarensis individuals were found. Fossils from A. afarensis date to between 3.7 million and 3 million years ago, so the two species would have overlapped (although Lucy herself may have lived too recently to see one).

The find suggests that several distinct hominins — species more closely related to humans than to chimps — roamed eastern Africa more than 3 million years ago. A third species, Kenyanthropus platyops, lived in what is now Kenya around the same time2. “The question that is going to come up is which taxa gave rise to our genus, Homo,” says Yohannes Haille-Selassie, a palaeoanthropologist at the Cleveland Museum of Natural History in Ohio, whose team reports its discovery in Nature1. “That’s going to be the 64-million-dollar question.”

The researchers did not realize the significance of the remains when they found a lower and upper jaw in March 2011, on what was supposed to be the final day of their field season exploring the arid Woranso-Mille area in northern Ethiopia. “That forced us to extend our field stay,” says Haille-Selassie.

Given the close proximity of Hadar, which has yielded hundreds of fossils belonging to A. afarensis, including Lucy’s relatively complete remains, the team guessed that the bones belonged to that species. But closer inspection revealed that the lower jaw was beefier, and the teeth smaller,  than those of the hominin's Hadar neighbours. Neither did K. platyops — defined by a flat-faced 3.5-million-year-old skull found near Lake Turkana, Kenya — prove a compelling match.

“We’re convinced this is different from all the species we know,” says Haille-Selassie. To make an even stronger case, his team hopes to link the A. deyiremeda jawbones to foot fossils from an as-yet unidentified species that his team also found in Woranso-Mille3, which belonged to a creature that spent more time in the trees than Lucy’s kind. “Then we’ll be in a better position to say this is a totally new species,” says Haille-Selassie. The species name deyiremeda derives from words in the local Afar language meaning ‘close’ and ‘relative’.

Haille-Selassie says it is unsurprising that several hominins lived in East Africa some 3.5 million years ago; their descendants were similarly diverse one million years later.

Fred Spoor, a palaeontologist at University College London who wrote an accompanying News and Views article on the Nature study4, speculates that the two species may both have been able to thrive side-by-side because they might not have directly competed for food, shelter and territory. The distinct jaw shapes of A. deyiremeda and A. afarensis could mean that they used their teeth on different kinds of food. But with so little evidence to hand, Spoor warns against jumping to conclusions about the relationship between the two species. "We shouldn’t suddenly think they stood at the Awash River, shook hands and said, ‘What are you doing here?’”

The first line and headline of an earlier version of this story referred to the newly discovered species as a “human ancestor”. In fact, it is not clear whether this species is a direct ancestor of modern humans or merely a relative. The text has been amended.