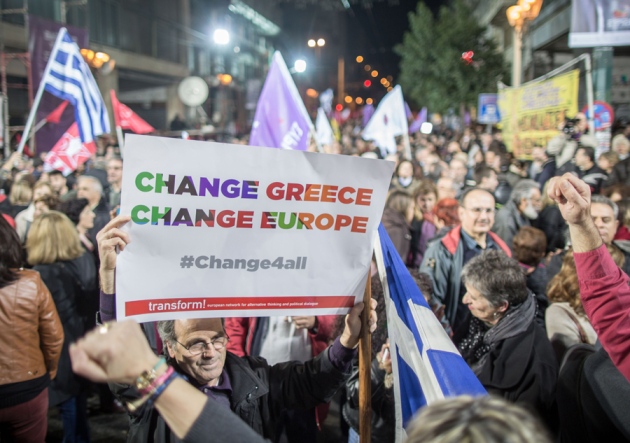 Supporters of Alexis Tsipras, leader of Syriza, rally ahead of the elections that would put the party in power.

Just a day after it was formed on 26 January, the new Greek government has given strong signals that it is taking science seriously: it has appointed a leading scientist as research minister. Costas Fotakis, director of the Greek Foundation for Research and Technology (FORTH) Institute of Electronic Structure and Laser (IESL) in Heraklion, and a physicist at the University of Crete, will be taking up the post today.

The appointment — and its extraordinary speed — took the research community by surprise, but many scientists say that it gives them grounds for an optimism that they have not felt for a long time.

The left-wing party Syriza gained the highest number of votes in Sunday’s election. The party is committed to renegotiating agreements with the European Commission, the European Central Bank and the International Monetary Fund on repayment of debts linked to the country’s painful austerity programme. Within a day, Syriza had formed a coalition government with a small right-wing nationalist party also opposed to austerity measures.

Research in the country was hit hard by austerity measures. During the years since the Greek crisis first hit in 2009, scientists have seen their research budgets and salaries slashed, the students they trained leaving in droves for more secure futures in other countries, and administrative support for universities cut to the bone.

Here, Nature has collected some thoughts and hopes from researchers.

“The assignment of Costas Fotakis as the new Minister of Research and Innovation is excellent news for the research community. Fotakis not only has full knowledge of the research ecosystem and the issues that have been plaguing it due to the irrational and bureaucratic measures applied so far, but he also has the experience to swiftly implement the urgently needed changes from this upgraded position for the head of research and development policy in Greece.”
Athanasios Konstandopoulos is director of the Aerosol and Particle Technology Laboratory in Thessaloniki.

“This is perhaps the least appropriate time to play the role of Pythia [the Oracle of Delphi]. There is a turbulent flux of ideas and notions among people in the new Politburo who will potentially be involved in research administration. Costas Fotakis is a renowned scientist and a highly competent and experienced administrator. Having served as the chairman of the board of FORTH, the most prominent research institution of Greece, and as the director of one of its institutes for years, he knows the strengths and weaknesses of Greek research inside out. I am confident that he will serve the betterment of conditions for science and research in Greece. His adherence to excellence is well known, and I believe he will work towards fostering meritocracy and rational support for research. An additional positive development is that the General Secretariat for Research and Technology has been upgraded to a ministry. This, in my opinion, signals that the new government sees scientific research as a higher priority for the country. I do hope that this more than welcome policy materializes into a tangible outcome for the scientific community in Greece.”
Nektarios Tavernarakis is director of the FORTH Institute of Molecular Biology and Biotechnology in Heraklion.

“I trust that the new government will strategically invest in research and technology as a priority means for economic development, the creation of new jobs for the highly educated young generation and the reversal of the ongoing brain drain. I would like to think that we will soon see mobilization of the necessary resources for funding innovative, world-class projects, executed with minimal bureaucracy.”
Rebecca Matsas is head of the Laboratory of Cellular and Molecular Neurobiology at the Hellenic Pasteur Institute in Athens.

“All Greek governments up to the crisis failed to understand the importance of research for economic growth. They failed to understand that a research expenditure of 0.58% of gross domestic product (GDP) was insufficient to support the development of products that could be exported to counterbalance the deficit generated by the excessive import of mobile phones, computers, laboratory equipment and so on. Export of agricultural products and tourism was simply not sufficient. Under the circumstances, it is difficult for any logical person to expect miracles within a short time. However, I would like to see the new government show that the role of research in economic growth and prosperity is well understood. The selection of Costas Fotakis as minister for research is a good sign. It is now realistic to hope that the structural changes that the research system requires will be implemented, followed by a slow increase of research and innovation expenditure every year until it reaches the levels of the other European Union (EU) countries (2–3% of GDP), despite the fact that perhaps our economy is still fragile. This is a measure that will contribute to transforming Greece into a competitive EU country. I cannot see how austerity measures restricting research and innovation can achieve the same.”
Theodore Fotsis is the director of the FORTH Biomedical Research Institute, based at the University of Ioannina.