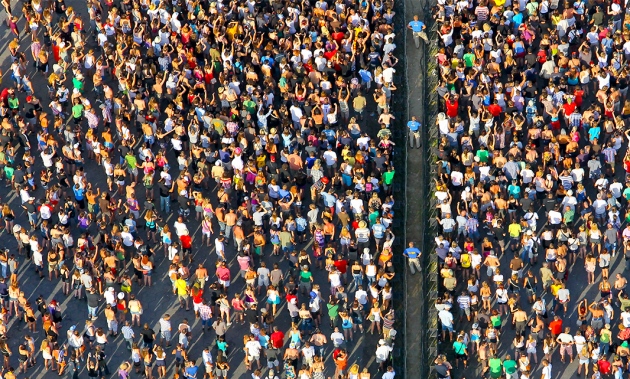 Compare the genomes of enough people with and without a disease, and genetic variants linked to the malady should pop out. So runs the philosophy behind genome-wide association studies (GWAS), which researchers have used for more than a decade to find genetic ties to diseases such as schizophrenia and rheumatoid arthritis. But a provocative analysis now calls the future of that strategy into question — and raises doubts about whether funders should pour more money into these experiments.

GWAS are fast expanding to encompass hundreds of thousands, even millions, of patients (see 'The genome-wide tide'). But biologists are likely to find that larger studies turn up more and more genetic variants — or 'hits' — that have minuscule influences on disease, says Jonathan Pritchard, a geneticist at Stanford University in California. It seems likely, he argues, that common illnesses could be linked by GWAS to hundreds of thousands of DNA variants: potentially, to every single DNA region that happens to be active in a tissue involved in a disease.

In a paper published in Cell on 15 June1, Pritchard and two other geneticists suggest that many GWAS hits have no specific biological relevance to disease and wouldn’t serve as good drug targets. Rather, these 'peripheral' variants probably act through complex biochemical regulatory networks to influence the activity of a few ‘core’ genes that are more directly connected to an illness.

“The implicit assumption of GWAS has been that when you find hits, they should be directly involved in the disease you’re studying,” he says. “When you start to think that all of the expressed genes in a tissue can matter, it becomes untenable that there’s a simple biological story for each one.”

Many geneticists think Pritchard's view could be correct — and say that he articulates widely-held concerns about the difficulty of interpreting GWAS findings because of gaps in understanding about biochemical networks. “I think it’s pretty plausible,” says Joe Pickrell, a human geneticist at the New York Genome Center in New York City. “We might not actually be learning anything hugely interesting until we understand how these networks are connected.” 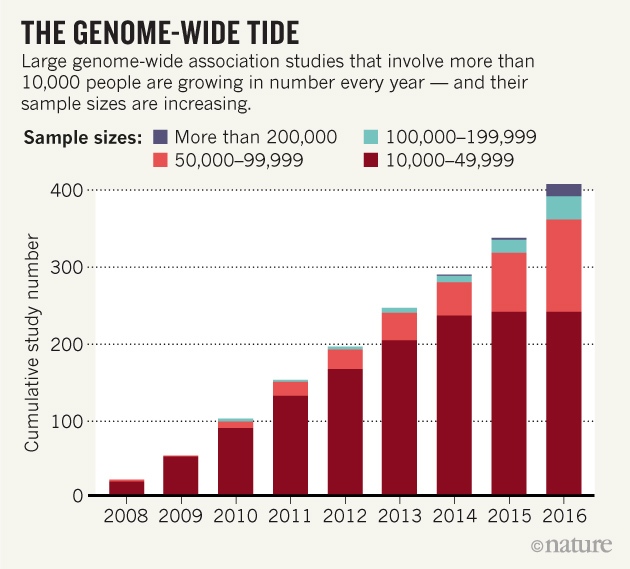 Rather than more and bigger GWAS, researchers and funders should devote their efforts to mapping regulatory networks in cells, Pritchard argues. Biologists who aim to link genes with diseases, he says, should focus on identifying the mutations that directly cause disorders; some of these variants are so rare that they aren't picked up in GWAS.

GWAS have identified some genes that contribute to the risk of developing conditions such as obesity, but they have also thrown up plenty of vexing problems. Most of the hits found in GWAS don’t seem to encode genes that make proteins, so it is hard to interpret their connection to a disease or trait. And even for traits that are known to be highly heritable — suggesting that they have a large genetic influence — the cumulative influence of all the DNA variants spotted by GWAS doesn’t fully explain the variation seen between people. A 2014 study of 250,000 people, for example, identified nearly 700 DNA variants linked to height, but together, they explain only about 16% of differences in height across a population2.

In the Cell paper, Pritchard’s team re-analysed the data from the 2014 study. The researchers estimate that as many as 100,000 single-letter DNA variants can influence a person’s height, but each one has a minuscule impact; on average just about one-tenth of a millimetre. These variants tend to lie in regions that do not themselves encode genes but which influence the activity of regions that do.

The researchers also re-analysed data from GWAS of schizophrenia, rheumatoid arthritis and Crohn’s disease. They found GWAS hits in DNA regions that are expressed in the particular cells relevant to the disease: neurons for schizophrenia, and immune cells for the two autoimmune diseases. But regions of DNA active in many types of body tissue were just as likely to be hits as those that were active only in neurons or immune cells, the team found. That lends credence to the idea that large GWAS are simply picking up most of the DNA variants that have an influence on gene regulation, and that happen to be active in broad functions of disease-relevant cells, rather than in particular activities linked to illness.

This doesn’t mean that researchers should stop carrying out GWAS, some geneticists say. Although GWAS hits might be peripheral to a disease, identifying more of them enables scientists to knit together the biological networks implicated in a disease and understand how they interact, says Mark McCarthy, a human geneticist at the University of Oxford, UK, who is working on a GWAS of type 2 diabetes involving around 1 million participants. “Those of us who do ever bigger GWAS, we don’t just simply crank the handle,” he says. “We’re motivated by lots of biological insights coming out of GWAS.”

And Joel Hirschhorn, a human geneticist at Children's Hospital Boston in Massachusetts, says that not all hits uncovered by very large GWAS are peripheral. The 2014 height study, which Hirschhorn co-led, uncovered an association to an important growth factor that wasn't picked up in a smaller GWAS of height, he points out.

But Aravinda Chakravarti, a human geneticist at Johns Hopkins University in Baltimore, Maryland, hopes that the paper will challenge what he terms a “cowboy attitude” in genomics research that emphasizes collecting ever more genetic associations over understanding the deeper biology behind them. “This is a nice paper simply because it’s going to kick people in the shin, which, as scientists, we need from time to time.”