You may remember the Monterey Bay Aquarium Research Institute (MBARI) from such discoveries as the Yeti crab, the squid with elbows and my personal favourite, the pigbutt worm, and now they’re back with footage of a new species of carnivorous sponge.

Seventeen years ago, Jean Vacelet and Nicole Boury-Esnault from the Centre of Oceanology at France’s Aix-Marseille University provided the first real evidence that a sponge could be more than, well, a sponge. They had discovered a new species of deep-sea sponge living in the unusual setting of a shallow Mediterranean sea cave, the inside of which mimicked the conditions of its usual habitat more than a kilometre below the surface. This allowed the researchers an unprecedented view of the sponge’s eating habits, and they watched as it snared its prey of small fish and crustaceans instead of absorbing bacteria and organic particles through their bodies, like most other sponge species do – including ones living in the very same cave.

Vacelet and Boury-Esnault’s sponges were of the Asbestopluma genus and belonged to the Cladorhizidae family of carnivorous demosponges – the class that contains over 90% of the world’s sponges. Since reporting their discovery in a 1995 issue of Nature, 24 new species of cladorhizid sponges, including the incredible ping-pong tree sponge (see below), have also been discovered. Yet due to the difficulty of studying their behaviour at such incredible depths, researchers have had little opportunity to describe essential aspects of their lives, particularly how they reproduce. 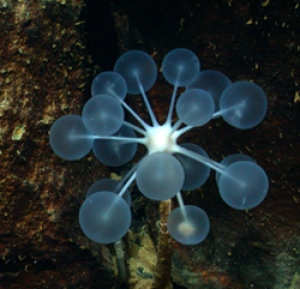 Which is where MBARI’s remotely operated vehicles (ROVs)  Tiburon  and Doc Ricketts, come in. Using these deep-diving vessels, a team of researcher s led by Senior Research Technician Lonny Lundsten discovered a species of harp sponge called Chondrocladia lyra off the coast of California, at depths of 3316–3399m.

As Mr_Skeleton pointed out on Reddit this week, this sponge doesn’t look like it could clean anything. But it can catch prey, envelope it in membrane and digest it whole, so it certainly has other priorities. Based on footage of several individuals and two large, fragmentary specimens brought up by the ROVs, Lundsten’s team described how the vertical branches and horizontal stolons that make up the sponge’s basic harp-like structure, called a vane, are covered in barbed hooks and spines. They found that a number of crustacean prey were passively ensnared on these branches thanks to the Velcro-like hooks and then aggressively enclosed in a cavity to be dismembered into small, digestible particles, which provided direct evidence of the species’ carnivorous appetites. 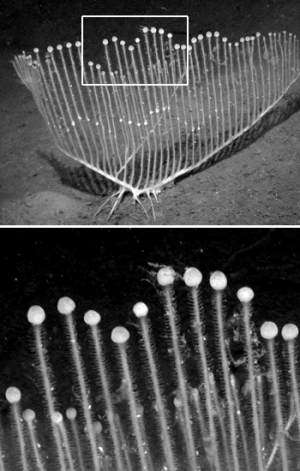 The vertical branches of the harp sponge are tipped by swollen terminal balls containing packets of sperm.

C. lyra can grow up to 37cm long – impressive for a sponge – and are anchored to the sea-floor by a structure called a rhizoid, which looks like a root system. They can have 1-6 vanes, each supporting a number of equidistant vertical branches, and each of these end in swollen terminal balls. According to the researchers, these terminal balls produce condensed packets of sperm called spermatophores, which are released into the surrounding water in the hopes of fertilising other harp sponges in the area. Each C lyra sponge also has an egg development area around the mid-point of the branches, and when the spermatophores make contact, these areas swell up as the eggs are fertilised and begin to mature.

The team suggests that the structure of the harp sponge is designed to ensure that they catch the most prey possible, and also maximise their chances of catching spermatophores from other harp sponges.

“Video footage taken as the ROVs approached specimens of C. lyra provided information about the biological diversity of the areas in which the sponges live,” the researchers added in their report in the current issue of Invertebrate Biology. “Among the coexisting invertebrates were unidentified sea anemones; the soft coral Anthomastus robustus, members of several species of sea pens; and the sea cucumber Paelopadites confundens, as well as another sea cucumber in the family Elipidiidae.”