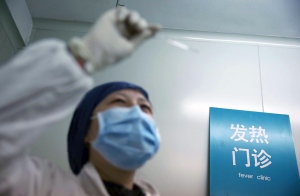 The H7N9 avian flu has not shown any signs of spreading from human to human, but its ability to spread among other mammals suggest it could yet evolve into a worse menace.

A study on the novel H7N9 avian influenza that has killed 36 people in China finds that the virus is transmissible between ferrets. According to the authors, the findings suggest that H7N9 could become capable of passing from person to person — although thus far the virus has not shown any signs of doing so.

The researchers, from China, Canada and the United States, inoculated six ferrets and four pigs with H7N9 isolated from a fatal human case in Shanghai. All the animals became infected.

Counting humans, that makes three mammalian species that can be infected with H7N9. Tests on other species, including companion animals such as cats and dogs, could give a better idea of the host range of the virus.

The H7N9 virus carries mutations that enable it to infect mammals, including humans, more easily than the related H5N1 avian flu can. There has been an unexplained lull in new cases since 7 May, but experts fear that it is only temporary.

Infections in other mammal species could provide the virus with opportunities to mutate and to adapt further. Pigs can be co-infected with avian and human flu, allowing the viruses to swap genes to create new strains, although extensive sampling in China has found no pigs harbouring H7N9.

The relative ease of spread between ferrets is in sharp contrast to what has been observed so far in the human outbreaks that were first reported in March. It is possible that person-to-person spread occurred in three family clusters of H7N9 cases, but so far there is no firm evidence of this.

Malik Peiris, a flu virologist at the University of Hong Kong and a co-author of the latest study, says that all flu viruses that spread easily between humans are also transmissible by air between ferrets. Flu infections that do not spread easily between humans, such as H5N1, do not transmit via the air between ferrets. What the latest work shows, he says, "is that this virus is closer to acquiring human-to-human transmission than other pandemic candidates out there, but not as transmissible as true seasonal [flu] viruses or pandemic 2009 H1N1".

The ferrets’ flu symptoms were limited to sneezing, coughing, runny noses and mild lethargy, in contrast with the severe disease seen in humans. Although ferrets show many aspects of human flu infections, the animals are an "imperfect model" for flu virulence in humans, says Frederick Hayden, a flu virologist at the University of Virginia in Charlottesville.

"It's self-evident that the best study of human disease is the study of humans with the disease," but the ferret studies complement these, says Peiris. He also says that autopsy data from human H7N9 cases is scarce and often reflects late-stage infection, for example, and so it does not capture the early stages of the disease. Data from infected humans, from cultured human cells and from animal experiments "all provide important and different dimensions of the questions we want to address,” Peiris says. “No one approach will give all the answers."