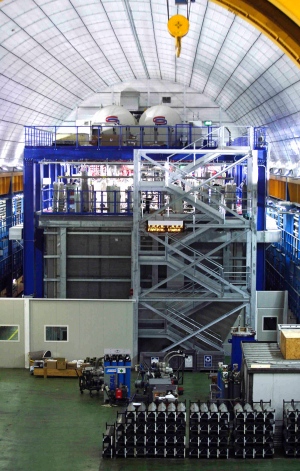 The ICARUS detector in Gran Sasso, Italy, has confirmed that neutrinos travel no faster than the speed of light.

Neutrinos obey nature's speed limit, according to new results from an Italian experiment. The finding, posted to the preprint server arXiv.org, contradicts a rival claim that neutrinos could travel faster than the speed of light.

The announcement made international headlines, but physicists were deeply sceptical. The axiom that nothing travels faster than light was first formulated by Albert Einstein and is a cornerstone of modern physics. OPERA defended its announcement, saying that it could find no flaw in its measurement.

Now another experiment located just a few metres from OPERA has clocked neutrinos travelling at roughly the speed of light, and no faster. Known as ICARUS, the rival monitored a beam of neutrinos sent from CERN in late October and early November of last year. The neutrinos were packed into pulses just 3 nanoseconds long. That meant that the timing could be measured far more accurately than the original OPERA measurement, which used 10-microsecond pulses.

“Our results are in agreement with what Einstein would like to have,” says Carlo Rubbia, the spokesperson for ICARUS and a Nobel prizewinning physicist at CERN. Neutrinos measured by the experiment arrived within just 4 nanoseconds of the time that light travelling through a vacuum would take to cover the distance, well within the experimental margin of error.

Because the pulses from CERN were so short, ICARUS measured only seven neutrinos during the late autumn run, but Rubbia says that the relatively low number does not matter. “How many times do you have to say 'zero' to make sure it's zero?” he asks.

The findings are yet another blow to OPERA, which was already under intense scrutiny from the wider experimental community. Almost as soon as the announcement was made, physicists began trying to poke holes in the OPERA analysis, and on 23 February researchers from within the OPERA team announced that they had uncovered possible timing problems with their original measurements (see 'Timing glitches dog neutrino claim'). Those problems could have led to the 60-nanosecond discrepancy.

Dario Autiero, a physicist at the Institute of Nuclear Physics in Lyon, France, and physics coordinator for OPERA, welcomes the latest result. He notes that OPERA continued to detect faster-than-light neutrinos in October and November, when the shorter pulses were used. The team continues to search for possible sources of error, he says.

For some, the new measurements settle the matter once and for all. “The OPERA case is now conclusively closed,” says Adam Falkowski, a theoretical physicist at the University of Paris-South in Orsay, France. But Rubbia says that he is still awaiting further measurements set to be made later in the spring by OPERA, ICARUS and two other experiments inside Gran Sasso.

“Had we found 60 nanoseconds, I would have sent a bottle of champagne to OPERA,” Rubbia says. But as it stands, he suspects he will be toasting Einstein. “It's quite a relief, because I'm a conservative character,” he says.

An earlier version of this story incorrectly stated that the neutrino pulses sent in late October and early November last year were approximately 4 nanoseconds long, rather than 3 nanoseconds.