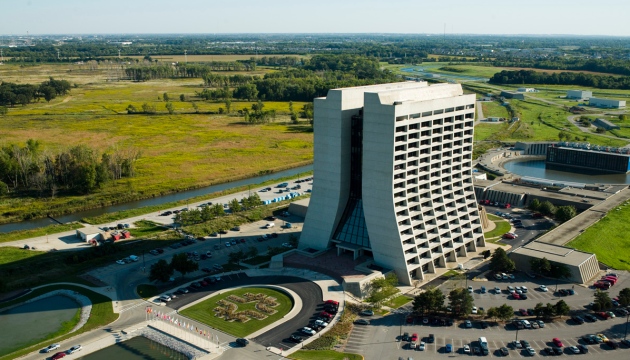 Fermilab is being forced to revise its experimental ambitions.

For physicists at the Fermi National Accelerator Laboratory in Batavia, Illinois, the nearly massless particles called neutrinos hold special weight. A proposed project called the Long-Baseline Neutrino Experiment (LBNE) aims to use neutrinos to sort out some puzzles of fundamental physics, and ensure that US particle physics has a centrepiece experiment for the future.

Yet, faced with serious budget constraints, Fermilab is drastically scaling back its plans. It originally intended to fire neutrinos from its base near Chicago at a massive underground detector, filled with 34,000 tonnes of liquid argon, situated 1,300 kilometres away at the Homestake mine in South Dakota. But after a workshop held on 25–26 April, Fermilab is focusing on two cheaper options. Both limit the sensitivity of the experiment and back off from plans for a deep underground detector, ruling out a potential pay-off: watching for proton decay, a prediction of the theory that unifies physics’ fundamental forces.

When Fermilab last year shut down the Tevatron, once the world’s most powerful accelerator, US particle physicists ceded the ‘energy frontier’ to Europe, with its Large Hadron Collider at CERN near Geneva, Switzerland. The LBNE is part of the United States’ bid to become a world leader at the ‘intensity frontier’ — experiments that use beams containing large numbers of particles to study very rare events.

But the original LBNE proposal, estimated to cost up to US$1.7 billion, was too much for the US Department of Energy to stomach. On 19 March, the department asked Fermilab to reconfigure the experiment into cheaper stages. Fermilab set up a working group, chaired by deputy director Young-Kee Kim, to revise the LBNE proposal. She says that the group aims to keep the cost of the first phase of the project to between $600 million and $700 million. 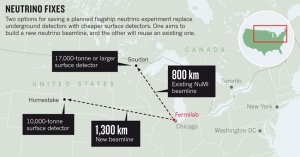 Last week, the working group met with the wider particle-physics community to hash through ways to cut costs while retaining the project’s three main science goals: determining the hierarchy of masses of the three known types of neutrino; establishing whether neutrinos disobey ‘charge–parity symmetry’, which might explain why the Universe contains more matter than antimatter; and searching for proton decay.

The workshop turned out two potentially affordable options, says Kim (see ‘Neutrino fixes’), but both sacrifice some of the scientific goals. One includes a new neutrino beam, but replaces an underground detector at Homestake with a smaller, surface detector that would be filled with 10,000 tonnes of liquid argon. The smaller size means that some statistical power will be lost, and the surface location rules out the possibility of seeing proton decay because particle decays from other sources would confound the results. But Jogesh Pati, a theoretical physicist at the SLAC National Accelerator Laboratory in Menlo Park, California, says that the detector isn’t big enough to keep the United States competitive. “With this detector, it would really be withdrawing itself from frontier science,” he says.

Proceeding with this option would, however, allow for a larger, or underground, detector to be built in the future, and for upgrades to its beam to support ‘Project X’ — the next high-intensity project in Fermilab’s plans.

“It’s crucial that we maintain a large facility in the United States.”

The second option is to aim an existing beam, called Neutrinos at the Main Injector, or NuMI, to a 17,000-tonne surface detector 800 kilometres away at the Soudan lab in Minnesota. Because the shorter distance makes it harder to see ‘oscillations’ between the three types of neutrino, the project would probably need to use data from other experiments to determine the mass hierarchy. Like the first option, this alternative would be unable to watch proton decay. But using an existing beam would be cheaper, and mean that the experiment could get started more quickly.

Some question whether the working group is thinking broadly enough. Neutrino physicist Janet Conrad of the Massachusetts Institute of Technology in Cambridge says that the group could, for example, revive an idea of using water in its detectors, which might be cheaper than liquid argon.

Vying for the lead

Other projects are already looking at some of the science questions that the LBNE was supposed to crack. Fermilab has one: NoνA (NuMI Off-Axis Electron Neutrino Appearance Experiment), which will start taking data in 2013, aims the NuMI beam at a detector in Ash River, Minnesota. It has a shot at answering the mass-hierarchy question, as does the T2K experiment in Japan. Upgrades planned for Super-Kamiokande in Japan in the next decade should allow it to watch for proton decay. And the HyperKamiokande project, which has yet to be proposed formally, aims to pin down the charge–parity violation issue.

Mel Shochet of the University of Chicago in Illinois, who led the working group’s physics team, worries that downgrading the LBNE project will undermine Fermilab’s global competitiveness. “It’s crucial that we maintain a large facility in the United States,” he says. “If we can’t find a solution to this, it’s a serious problem. But I’m hopeful.”