Physicists have replicated the finding that the subatomic particles called neutrinos seem to travel faster than light. It is a remarkable confirmation of a stunning result, yet most in the field remain sceptical that the ultimate cosmic speed limit has truly been broken.

The collaboration behind the experiment, called OPERA (Oscillation Project with Emulsion-tracking Apparatus), made headlines in September with its claim that a beam of neutrinos made the 730-kilometre journey from CERN, Europe's particle-physics lab near Geneva in Switzerland, to the Gran Sasso National Laboratory near L'Aquila, Italy, faster than the speed of light. The result defies Albert Einstein’s special theory of relativity, which states that this cannot happen. 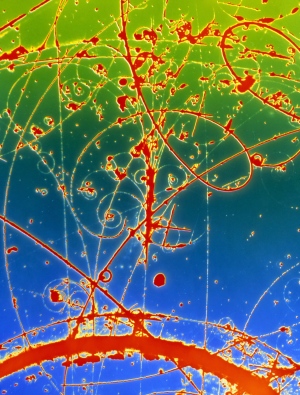 Neutrinos — here betraying their presence by interacting with other particles — are elusive and, it would seem, impossibly speedy.

The result was highly statistically significant, but following author and astrophysicist Carl Sagan’s dictum that extraordinary claims require extraordinary evidence, most physicists expressed doubts. Few questioned the carefulness of OPERA's data-taking and analysis, but there was rampant speculation about possible sources of error. Some made claims of mistakes that the collaboration was quick to address (see 'Faster-than-light neutrinos face time trial').

One concern was that, at 10.5 microseconds (millionths of a second), the proton pulses that CERN used to generate the neutrino pulses were relatively long. OPERA could not know whether individual neutrinos received at Gran Sasso corresponded to protons early or late in the proton pulse, creating uncertainty around their travel time.

In October, OPERA therefore asked CERN to generate shorter proton pulses, lasting just 3 nanoseconds (billionths of a second), more than 3,000 times briefer than the earlier test. They have now recorded 20 events in the new data run, and have claimed a similar level of statistical significance to the first set of results.

Once again, the neutrinos would beat a light beam to Gran Sasso by 60 nanoseconds. The new result was released on the arXiv preprint server on 17 November1.

“It’s slightly better than the previous result,” says OPERA’s physics coordinator, Dario Autiero of the Institute of Nuclear Physics in Lyons (IPNL), France. He adds that most of the members of OPERA who declined to sign the original paper because they wanted more time to check the result have now come on board.

One of these is Caren Hagner of the University of Hamburg in Germany. Not only has the beam precision been improved, she says, but the statistical analysis is also more robust and has been replicated by groups within OPERA besides the original team. “We gained much more confidence,” Hagner says.

OPERA expects the new result to rule out uncertainties due to duration of the proton pulses. But concerns about the experiment’s use of the Global Positioning System (GPS) to synchronize clocks at each end of the neutrino beam are unlikely to be as easily allayed.

GPS, which was used in both the original and latest experiments, is previously untried in the field of high-energy and particle physics. Hagner adds that she would like to see the time measurement checked using another part of the OPERA detector.

For most physicists outside the collaboration, the key test will be replication by an independent experiment. The project best placed to confirm or refute OPERA’s result soonest is MINOS (Main Injector Neutrino Oscillation Search) at Fermilab in Batavia, Illinois.

In response to the latest OPERA result, MINOS issued a statement saying that it is upgrading its timing system to match OPERA's precision. MINOS might also be able to complete a preliminary check of the OPERA result, using its existing system, as soon as early 2012.

"OPERA is to be congratulated for doing some important and sensitive checks, but independent checks are the way to go," says Rob Plunkett, co-spokesman for MINOS.