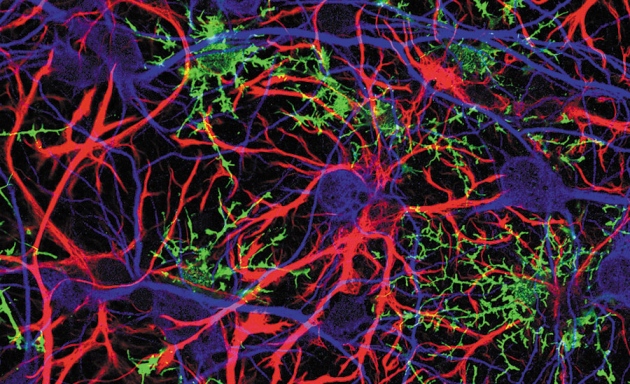 The Brain Research through Advancing Innovative Neurotechnologies (BRAIN) Initiative announced by US President Barack Obama in April seeks to map and monitor the function of neural connections in the entire brains of experimental animals, and eventually in the human cerebral cortex. Several researchers have raised doubts about the project, cautioning that mapping the brain is a much more complex endeavour than mapping the human genome, and its usefulness more uncertain.

I believe that exploring neural networks and developing techniques with which to do so are important goals that should be vigorously supported. But simply scaling up current efforts to chart neural connections is unlikely to deliver the promised benefits — which include understanding perception, consciousness, how the brain produces memories, and the development of treatments for diseases such as epilepsy, depression and schizophrenia1.

A major stumbling block is the project's failure to consider that although the human brain contains roughly 100 billion neurons, it contains billions more non-electrical brain cells called glia2. These reside outside the neuronal 'connectome' and operate beyond the reach of tools designed to probe electrical signalling in neurons. Dismissed as connective tissue when they were first described in the mid-1800s, glia have long been neglected in the quest to understand neuronal signalling.

Research is revealing that glia can sense neuronal activity and control it3. Various studies also indicate that glia operate in diverse mental processes, for instance, in the formation of memories. They have a central role in brain injury and disease, and they are even at the root of various disorders — such as schizophrenia and Alzheimer's — previously presumed to be exclusively neuronal. That the word 'glia' was not uttered in any of the announcements of the BRAIN Initiative, nor written anywhere in the 'white papers' published in 2012 and 2013 in prominent journals outlining the ambitious plan1, 4, speaks volumes about the need for the community of neuroscientists behind the initiative to expand its thinking.

All major glial cell types in the brain — oligodendrocytes, microglia and astrocytes — communicate with each other and with neurons by using chemical neurotransmitters and gap junctions, channels that permit the direct transfer between cells of ions and small molecules (see ‘Roles of glial cells’). 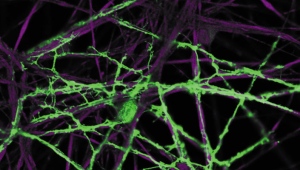 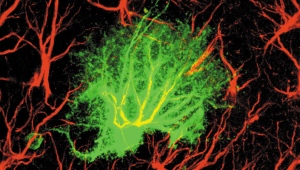 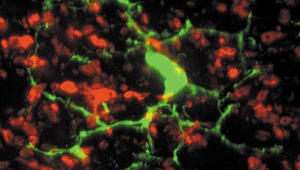 Oligodendrocytes produce the myelin sheath, the insulating material that surrounds nerve fibres called axons. This sheath greatly increases the speed at which electrical signals are transmitted through axons — a crucial feature because nervous-system function depends on information being transmitted at high speed.

Biologists have known for decades that microglia — the immune cells of the brain — respond to infection and brain trauma by clearing away diseased or damaged tissue and releasing substances that stimulate repair. But last year, a study5 of how eye–brain connectivity is established in developing mice showed that microglia also prune back synapses and rewire neural connections in a healthy brain, depending on the individual's visual experience shortly after birth.

Various studies3 have revealed that astrocytes regulate the transmission of electrical signals across synapses by modifying the concentration of extracellular potassium; controlling local blood flow; releasing and taking up neurotransmitters and other neuromodulatory substances; delivering nutrients to neurons; and altering the geometry and volume of space between brain cells. All of these things influence nervous-system communication and plasticity.

This video captures the waves of calcium ions passing between rat astrocytes as they engage in non-electrical communication.

When experts on neuronal plasticity and computational neuroscience came together with glial experts at a workshop in February entitled Glial Biology in Learning and Cognition6, held at the US National Science Foundation in Arlington, Virginia, our unanimous conclusion was that neurons working alone provide only a partial explanation for complex cognitive processes, such as the formation of memories. The complex branching structure of glial cells and their relatively slow chemical (as opposed to electrical) signalling in fact make them better suited than neurons to certain cognitive processes. These include processes requiring the integration of information from spatially distinct parts of the brain, such as learning or the experiencing of emotions, which take place over hours, days and weeks, not in milliseconds or seconds.

Pioneering research on glia is even offering glimpses into the mechanisms that underlie learning, other forms of plasticity and information processing. For instance, my research group has established that, in vitro, the impulse traffic in an axon can control its myelination by glia7. Because myelination determines the speed at which an electrical signal is transmitted through an axon, it can influence how many inputs fire on to a neuron at the same time — a process that is fundamental to most learning and synaptic plasticity. When people acquire new skills, from juggling to playing computer games, the structure of specific myelinated regions of their brains changes8.

We are only beginning to learn about the diversity, connectivity and function of astrocyte networks. Various studies suggest that astrocytes have anatomical and physiological properties that may impose higher-order organization on information processing in the brain. In the grey matter of the cerebral cortex and hippocampus, astrocytes are organized in non-overlapping domains. The significance of this tile-like organization is unknown, but one human astrocyte (an intricate, bush-like cell) can encompass, and therefore influence, two million synapses9. In fact, human astrocytes are markedly different from those of other animals. Mice that have had a proportion of their astrocytes replaced with human ones show increased synaptic plasticity and faster learning9 in a range of tests.

Neuroscientists have known for several decades that glia cause certain diseases. Nearly all cancers originating in the brain derive from glia (which, unlike mature neurons, undergo cell division). In multiple sclerosis, the myelin sheaths around axons become damaged, and in HIV-associated neurological conditions, the virus infects astrocytes and microglia, not neurons. Many neurological disorders that were once considered to be exclusively neuronal in nature are now also known to involve glia, including Rett syndrome, a neurodevelopmental condition that includes autism-like symptoms, the motor-neuron disease amyotrophic lateral sclerosis, Alzheimer's disease and chronic pain. The same is true for various other developmental and psychiatric conditions such as schizophrenia, depression and obsessive–compulsive disorder2, 3.

Mapping and monitoring the entire human cerebral cortex is expected to require an investment comparable to that needed for the Human Genome Project: US$3.8 billion1. The public will not support such a major expenditure of public funds for a scientific research project if the promised benefits are oversold, if they do not understand the benefits or if the costs are not realistic. This was demonstrated in 1993 by the US Congress's cancellation of a multibillion-dollar project to build a superconducting super collider, the construction of which was already under way in Waxahachie, Texas.

Unlike the quest to capture the Higgs boson or to land a human on the Moon, few people question the need to understand the human brain. The brain is the greatest enduring mystery of the human body, and intellectual disability, brain cancer, spinal-cord injury, senile dementia and mental illnesses such as schizophrenia and depression touch the lives of almost everyone. But on its current trajectory, the BRAIN Initiative risks failure — both scientifically and in terms of public support.

At the World Science Festival in New York in June, one participant argued that information about glia will be a by-product of neuronal mapping and of the development of technologies to trace and record neuronal connections. This is implausible. New methods to monitor electrical signalling in neurons, such as voltage-sensitive dyes or nanoparticles that sense the electrical potential across membranes, will be of little use for understanding cells that do not communicate using electrical impulses. It is this view that has perpetuated our comparative ignorance about glia.

Moreover, the exclusion of glia from the BRAIN Initiative underscores a more general problem with the project: the assumption that enough measuring of enough neurons will in itself uncover 'emergent' properties and, ultimately, cures for diseases1, 4. Rather than simply materializing from measurements of “every spike from every neuron”1, 4, better understanding and new treatments will require hypothesis-directed research. The 302 neurons and 7,000 connections that make up the nervous system of the roundworm Caenorhabditis elegans were mapped in the 1970s and 80s. More than two decades later, little is understood about how the worm's nervous system produces complex behaviours.

In any major mapping expedition, the first priority should be to survey the uncharted regions. Our understanding of one half of the brain (the part comprised of astrocytes, oligodendrocytes and microglia) lags a century behind our knowledge of neurons. I believe that answers to questions about the brain and public support for a large-scale study are more likely to come from expanding the search into this unknown territory. As a first step, tools such as optogenetic methods and mathematical models are needed to assess the number, distribution and properties of different kinds of glial cell in different brain regions, and to identify how glia communicate with each other and with neurons, and what developmental and physiological factors affect this. This exploration into the 'other brain' must be done together with the proposed studies of neurons. It cannot be achieved as a by-product of them.