A chemical in llama semen responsible for inducing ovulation in females has been identified and, surprisingly, it is a protein already known for its role in promoting the growth and survival of nerve cells in many species1. The protein — nerve growth factor (NGF) — is also found in human semen, suggesting that it may play a previously unsuspected role in human fertility. 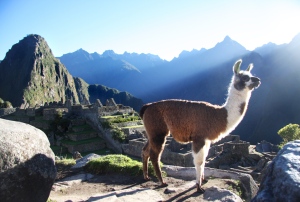 Female llamas ovulate only when induced by a chemical in semen.

Whereas many animals, including humans, cattle and mice, produce eggs as part of a cycle of spontaneous ovulation, others — including llamas, camels, rabbits and koalas — are ‘induced ovulators’ that need a chemical stimulus. In 2005, Gregg Adams, a veterinary surgeon and reproductive scientist at the University of Saskatchewan in Saskatoon, Canada, and his colleagues showed that in llamas, the stimulus was in the seminal fluid2. In the latest study, published this week in the Proceedings of the National Academy of Sciences1, Adams led a team that identified the chemical as NGF.

Although human women do not require NGF in semen to ovulate, Adams says that the protein could still have a direct effect on human fertility. Earlier this year, he published a paper3 showing that llama seminal fluid shortens the ovulation cycles of cows and seems to stimulate the development of the corpus luteum — a structure inside the ovaries that forms after an egg has been released and secretes hormones vital to pregnancy.

In some cases, NGF could explain why some couples find it difficult to conceive, says Adams. A couple could have fertility problems if either the man failed to produce enough NGF in his semen or the woman lacked the receptors to detect and respond to it, he says.

Previous research has already shown that NGF and similar proteins are made in human ovaries4 and have a local effect on how the eggs develop, says Sergio Ojeda, a neuroscientist at Oregon Health and Science University in Portland. But Adams believes the latest study indicates that seminal NGF may be acting like a hormone — making its way through the walls of the vagina, into the blood and all the way to the brain, where it stimulates the release of other hormones that affect the ovaries.

“The beauty of this paper was that they weren’t looking for NGF,” says Ojeda. The research, he says, is “extremely exciting because, in the past, the scientific community has sometimes been guilty of only going with the established dogma".