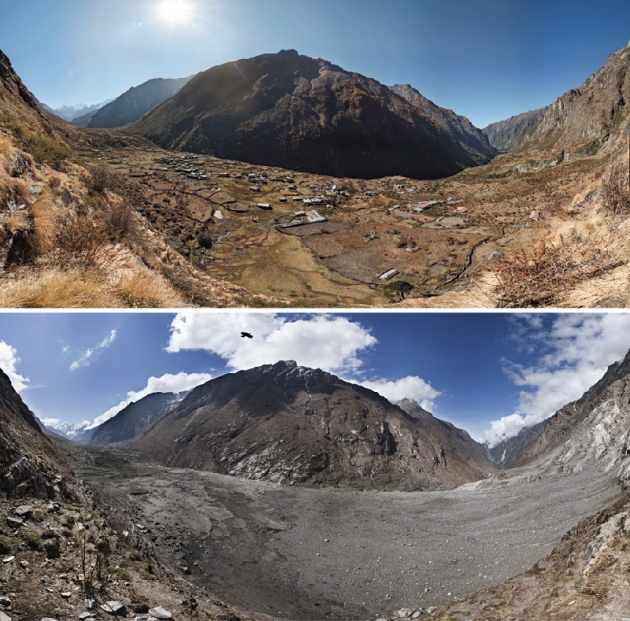 Photographs of Lantang Valley in 2012 (upper) and after the earthquake in 2015 (lower).

The devastating magnitude-7.8 earthquake that struck Nepal in April caused surprisingly few landslides, researchers say — confirming the early impressions of scientists who raced to map collapsed terrain in the quake’s aftermath. However, there is still hot debate over just how severe the event’s impacts were.

Large earthquakes in mountainous areas typically cause tens or hundreds of thousands of landslides, as ground on steep slopes is loosened by shaking. But after scouring thousands of satellite images taken before and after Nepal’s Gorkha quake, a 64-member team counted only 4,312 landslides, it reports in Science on 15 December1.

Other, non-peer-reviewed studies have counted many more small landslides, but still suggest that the quake triggered slope failures much less severe than its magnitude would suggest.

The finding nicely demonstrates that “it’s not just the magnitude of the quake that counts”, says Niels Hovius, who studies landslides at the German Research Centre for Geosciences in Potsdam and was not involved in the Science paper. How a quake releases seismic energy, and regional characteristics such as slope steepness and rock types, are also crucial. As a result, “some mountains were hit hard, others nearby were barely scratched,” says Jeffrey Kargel, a glaciologist at the University of Arizona in Tucson, who led the study. 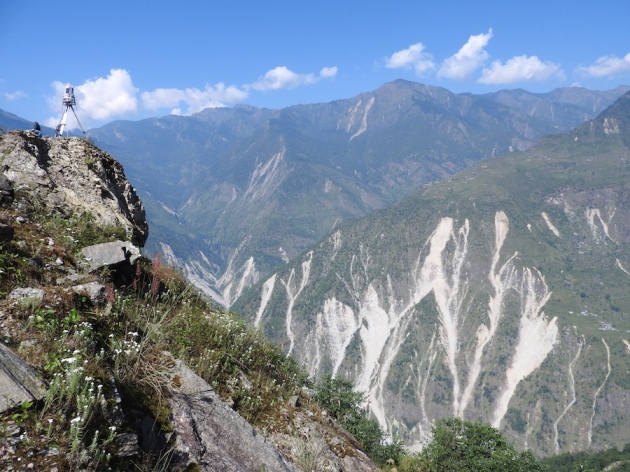 The ground shook less strongly than might have been expected from the quake’s magnitude, Kargel says. A likely reason is that the rupture occurred 10–15 kilometres underground along a long, narrow segment of the main Himalayan geological fault near Kathmandu (where the Indian tectonic plate slides under southern Tibet), and the rupture never reached the surface.

The most violent impact occurred in the Langtang valley, north of Kathmandu, where ice and rock crashed 3.75 kilometres down a slope onto a riverbed, and sent a powerful wind blasting down the valley, flattening structures. Wind speeds exceeded 322 kilometres per hour and the impact released half as much energy as the Hiroshima nuclear bomb, the report says.

Other geologists agree that the way in which the fault ruptured without breaking the surface likely explains the low number of landslides Kargel's team saw. But they argue that the landslide count gleaned from satellite images is nowhere near the true number, and is not the best measure of the Gorkha quake’s impact.

A July report released jointly by the US Geological Survey (USGS) and the US Agency for International Development, for instance, used helicopter surveys to estimate that the quake triggered a few tens of thousands of landslides. “We flew over places where there were easily thousands of landslides,” says Brian Collins, a geologist at the USGS in Menlo Park, California, who led that study and is also a co-author of the Science paper. “A lot of them are simply too small to be detected in satellite images,” he says.

“What really matters is the size of landslides and the total volume of debris they mobilize,” says Hovius. Using a model that took into account information such as quake depth and geometry, the seismic waves it generated and physical characteristics of slopes and rock types, Hovius and his colleagues estimate in an as-yet unpublished study that the quake triggered between 200 million and 300 million cubic metres of landslides, less than the 500 million cubic metres caused by a magnitude-7.6 earthquake that struck Taiwan in 1999.

In any case, the quake had huge economic impacts, says Amod Dixit, executive director of Nepal’s National Society for Earthquake Technology in Lalitpur. Millions of people are still displaced; many roads, including the Arniko Highway that connects Kathmandu with Tibet, continue to be hit by landslides and are barely operational.

“While the landslides are not as severe as we initially feared, they caused a lot of damage to the landscape that is prone to future failures,” says Alexander Densmore, who studies landslides at Durham University, UK. During this year’s monsoon season, from June to September, landslides occurred ten times more frequently than normal, he says. (The analysis by Kargel's team does not cover the time of the monsoon; the researchers looked at satellite images taken up to mid-June, before the rains began). Hovius estimates that slopes will continue to fail at a heightened rate for some four to five years because of the Gorkha quake.

Historically, landslides after earthquakes have drastically reshaped the geography of Nepal. The country’s second-largest city, Pokhara, is built on between 4 billion and 5 billion cubic metres of debris from landslides triggered by three medieval earthquakes, each greater than magnitude 8, according to an analysis in a separate paper published today in Science2 by a team led by geomorphologist Wolfgang Schwanghart of the University of Potsdam.

“Landslide hazards are the biggest challenge for resettling displaced populations,” says Dixit. “Getting an accurate picture of where landslides are and how they will evolve is essential for any reconstruction plans.”