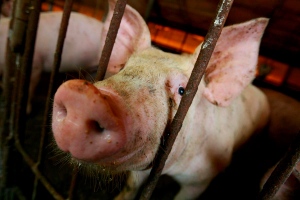 Pigs are one of several potential sources of deadly new strains of influenza.

The emergence of the H1N1 influenza virus that leapt from pigs to humans in 2009, triggering a global pandemic, reminded us of the need to monitor animals such as pigs that can host the development of dangerous viral strains.

A study published today re-emphasizes that need. Young-Ki Choi at Chungbuk National University in Cheongju, South Korea, and his colleagues have isolated a new strain of H1N2 influenza from Korean pigs that kills infected ferrets — the model animal of choice for influenza work — and can spread through the air[1].

“It shows that there are very nasty viruses being generated in swine,” says Robert Webster of the St. Jude Children’s Research Hospital in Memphis, Tennessee, one of the study’s senior authors. “And these viruses are coming out of apparently healthy pigs.”

Like that responsible for the 2009 pandemic, the new strain, known as Sw/1204, is a 'triple-reassortant' virus — that is, one with genes from avian, swine and human flu. Such viruses, which first appeared in North America in 1998, have been circulating in Korean pigs for at least a decade.

Choi wanted to assess the pandemic potential of Korean strains. His team tested two H1N2 and two H3N2 viruses isolated from pig abattoirs before the 2009 pandemic. Most of these viruses did not cause any signs of serious disease in ferrets.

Sw/1204 was the exception. It replicated in the airways and lungs of three infected ferrets, killing one and causing such severe disease in the others that they had to be euthanized. The virus also spread through the air to infect three healthy ferrets that were housed in cages next to infected ones.

The virus gained two new mutations in its trip between the cages — one from aspartic acid to glycine in the haemagglutinin protein (HA225G), and one from serine to asparagine in neuraminidase (NA315N). The mutant virus was better at infecting and growing in human lung tissues and airway cells than the parental strain, and could still thrive and spread among swine.

The HA225G mutation allows the virus to bind more effectively to receptors in the lungs of its hosts, and has been linked to greater pathogenicity, but not transmissibility, in the pandemic H1N1 strain. NA315N has also been found before, but its role is less clear. Choi suggests that it stabilizes the neuraminidase protein, which is involved in viral break-out from host cells.

By introducing the two mutations individually into the original Sw/1204 strains, the team showed that both contribute to the greater virulence and transmissibility of the virus. Malik Peiris, a clinical virologist at the University of Hong Kong, says the work shows how important it is for changes in haemagglutinin and neuraminidase to complement each other to maintain a balance in the virus.

But these mutations cannot fully account for the deadly nature of the transmitted Sw/1204 viruses. When Choi added them to another H1N2 strain, they did not increase transmissibility or virulence to the same degree, suggesting that other genetic features of Sw/1204 also play a part. Choi’s team are now trying to identify these features.

Jeremy Farrar of the Oxford University Research Hospital Unit in Ho Chi Minh City, Vietnam, says that the study “certainly underscores the need for surveillance of mammals”. But he adds that humans, poultry, wild birds and other species are also important targets for surveillance, and endemic countries have limited resources. “The importance of the surveillance is not in question. The issues are how to undertake it in a smart, sustainable way and who will pay for it,” he says. “None of us has answered those questions.”