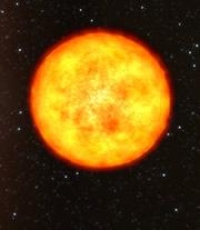 The oldest known stars (one seen here in artists impression) date back at least 13.2 billion years.

Astronomers have discovered a Methuselah of stars — a denizen of the Solar System's neighbourhood that is at least 13.2 billion years old and formed shortly after the Big Bang.

“We believe this star is the oldest known in the Universe with a well determined age,” says Howard Bond, an astronomer at Pennsylvania State University in University Park, who announced the finding on 10 January at a meeting of the American Astronomical Society in Long Beach, California1.

The venerable star, dubbed HD 140283, lies at a comparatively short distance of 190 light years from the Solar System and has been studied by astronomers for more than a century. Researchers have long known that the object consists almost entirely of hydrogen and helium — a hallmark of having formed early in the history of the Universe, before successive generations of stars had a chance to forge heavier elements. But no one knew exactly how old it was.

Determining the star’s age required several steps. First, Bond and his team made a new and more accurate determination of the star’s distance from the Solar System, using 11 sets of observations recorded between 2003 and 2011 using the Hubble Space Telescope’s Fine Guidance Sensors, which measure the position of target stars relative to reference stars. The astronomers also measured the brightness of the star as it appears in the sky, and were then able to calculate its intrinsic luminosity.

The team then exploited the fact that HD 140283 is in a phase of its life cycle in which it is exhausting the hydrogen at its core. In this phase, the star's slowly dimming luminosity is a highly sensitive indicator of its age, says Bond. His team calculates that the star is 13.9 billion years old, give or take 700 million years. Taking into account that experimental error, the age does not conflict with the age of the Universe, 13.77 billion years.

The star's age is therefore at least 13.2 billion years — which was the estimated age of another known Methuselah2 — and possibly older. Its age is known with considerably better confidence than that of the previous Methuselah, says Bond.

The discovery places constraints on early star formation, says Volker Bromm, an astronomer at the University of Texas at Austin. The very first generation of stars coalesced from primordial gas, which did not contain appreciable amounts of elements heavier than helium, he notes. That means that as old as HD 140283 is, its chemical composition — which includes a low but non-zero abundance of heavy elements — shows that the star must have formed after the first stellar generation.

Conditions for making the second generation of stars, then, “must have been in place very early”, says Bromm. The very first stars are usually thought to have coalesced a few hundred million years after the Big Bang, he notes. Massive and short lived, they died after only a few million years — exploding in supernovae that heated surrounding gas and seeded it with heavier elements.

But before the second generation of stars could form, that gas had to cool down. The early age of the second-generation star HD 140283 hints that the cooling time, or delay, between the first and second generations might have been extremely short, perhaps only a few tens of million years, says Bromm.