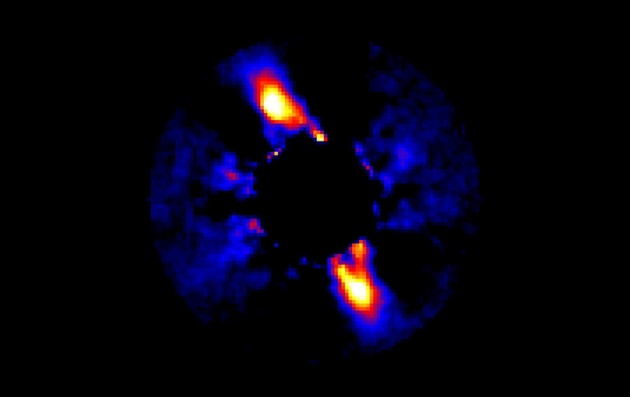 Astronomers have discovered a bright ring of debris around a nearby star that resembles the Kuiper belt, a reservoir of comets and other frozen bodies that orbits the Sun beyond Neptune.

Because the ring circles a star that is only 15 million years old, studying it could reveal what the outer Solar System looked liked in its infancy, around 4.56 billion years ago. The Kuiper belt, a remnant of that era, contains leftover material from the formation of the icy outer planets.

The findings, which have been accepted for publication in Astrophysical Journal Letters, were posted on the arXiv preprint server on 27 May1.

The newfound ring of debris resides some 110 parsecs (360 light years) from the Solar System — a stone’s throw in astronomical terms. It circles HD 115600, one member of a group of youthful stars called the Scorpius-Centaurus OB Association.

The ring is about the same distance from its parent star as the Kuiper belt is from the Sun, and receives roughly the same amount of light. Its blue-grey colour hints that it could consist of ices and rocky silicates such as those found in the Kuiper belt, says lead author Thayne Currie, an astronomer at the Subaru Telescope in Hawaii, which is run by the National Astronomical Observatory of Japan.

“This is absolutely the closest example we have of a young Kuiper belt,” he says.

Anthony Boccaletti, an astronomer at the Paris Observatory in Meudon, France, agrees with Currie. Astronomers have observed other disks of debris in orbit around stars, but all of those have been farther from their parents than the Kuiper belt is from the Sun, he notes. The new ring “adds another important piece to the big picture”, he says.

Currie’s team found that the centre of the ring is offset from the star, perhaps by the gravity of a massive, unseen planet on an elliptical orbit. The lurking planet could be as massive as Jupiter, according to the team’s calculations.

The astronomers discovered the ring using the Gemini Planet Imager (GPI). The instrument, which is part of the Gemini South telescope in Chile, uses a disk called a coronagraph to blot out the glare of bright stars. That allows it to take multi-wavelength pictures of faint, orbiting planets and debris disks around stars, by recording near-infrared light from the parent star as it scatters off the debris.

The researchers discovered the disk around HD 115600 fewer than 6 months after the GPI began operation. A similar instrument, known as SPHERE, began operating in May 2014 on the European Southern Observatory’s Very Large Telescope in Chile and has also begun to make discoveries2.

“With these two instruments, we should expect several other discoveries of disks — and planets — on a very short timescale,” says Boccaletti.